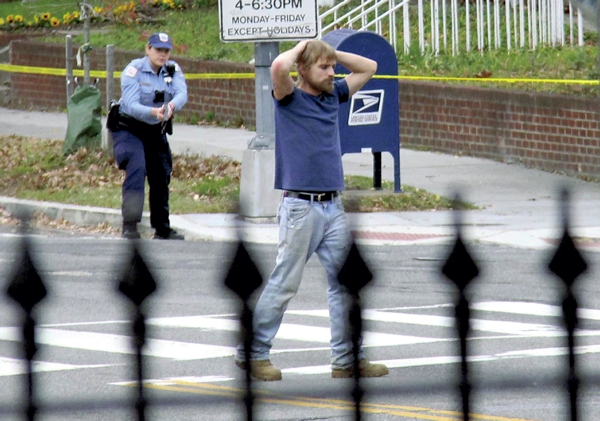 Edgar Maddison Welch, 28 of Salisbury, surrenders to police Sunday, Dec. 4, 2016, in Washington. Welch, who said he was investigating a conspiracy theory about Hillary Clinton running a child sex ring out of a pizza place, fired an assault rifle inside the restaurant injuring no one, police and news reports said. (Sathi Soma via AP)

A Salisbury man accused of firing an AR-15-style rifle in a Washington, D.C., pizza parlor has been given another week to consider a possible plea deal.

Edgar Madison Welch, 28, is to appear in a Washington court again on March 15.

Welch is accused of going into the Comet Ping Pong restaurant on Dec. 4 and firing his rifle. No one was injured.

Investigators say Welch claimed there was a child sex ring inside the restaurant and he was there to rescue children. He reportedly read reports about the ring online.

On Monday, U.S. District Judge Ketanji Jackson gave Welch’s attorneys until March 13 to decide if Welch will accept the deal, according to WTOP. Details of the deal have not been made public. Welch and his attorneys must present their decision March 15.

Welch has pleaded not guilty to a federal charge of interstate transportation of a firearm with the intent to commit a crime and two local counts of assault with a dangerous weapon and possession of a firearm during the commission of a violent crime.

By Shavonne Walker shavonne.walker@salisburypost.com SALISBURY — Nine years ago, one of the worst tragedies the Salisbury firefighting community has seen... read more