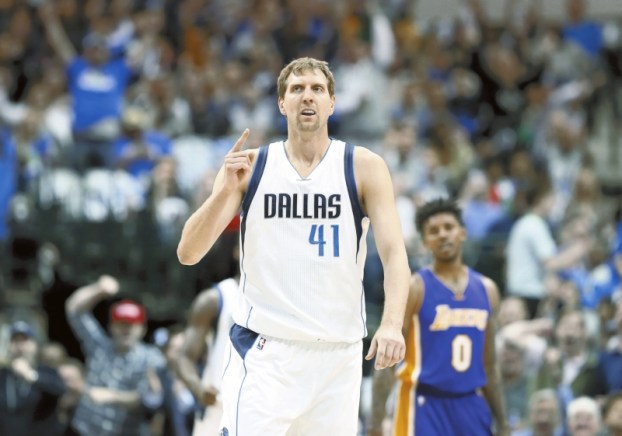 DALLAS (AP) — Dirk Nowitzki scored the 20 points he needed for 30,000 in his career in barely more than a quarter, and the Dallas Mavericks celebrated with their second straight easy home win over the Los Angeles Lakers, a 122-111 victory Tuesday night.

The 7-foot German became the sixth NBA player and the first international one to reach the milestone, joining four Hall of Famers and a future one in Kobe Bryant. Nowitzki is one of three to score all 30,000-plus with one team. The others are Karl Malone (Utah) and Bryant (Lakers).

The 38-year-old Nowitzki matched the best first quarter in his 19 seasons by scoring 18 points, and reached the hallowed mark on a 15-foot fadeaway jumper from the baseline over Larry Nance Jr. with 10:58 remaining in the second quarter.

Nowitzki scored all of his 25 points — one shy of his season high — in the first half to send the Mavericks to a 31-point lead in the third quarter. This was the Lakers’ first visit to Dallas since setting a franchise record with a 49-point loss, a 122-73 blowout on Jan. 22.

“It’s been a crazy ride with a lot of ups and a lot of downs but you guys stuck with me and we hung in there,” Nowitzki told the crowd shortly after the final buzzer. “Hopefully a lot more to come.”

Dallas extended a franchise record with its 14th straight win over the Lakers, who got a triple-double from Julius Randle with 13 points, 18 rebounds and 10 assists in their eighth straight loss.

After the signature shot for 30,000, Nowitzki added a 3-pointer for 23 points in the first 14 minutes before the game was stopped as teammates mobbed the wide-smiling star near midcourt.

Nowitzki waded through the huddle to get to the bench for more hugs and hand slaps, including one from owner Mark Cuban, then returned to the court to acknowledge the standing ovation.

“Dirk has been a model player and terrific ambassador for our game. This latest accomplishment further establishes his legacy as one of the NBA’s greatest players,” NBA Commissioner Adam Silver said in a statement.

With his ABA career included, Julius Erving is the seventh player to reach the mark.

Fans arrived with T-shirts draped over their seats that read “30K” behind a silhouette of Nowitzki’s signature one-legged fadeaway jumper.

Nowitzki got them going right away, scoring the first eight Dallas points on a long 2-pointer and a pair of 3s in the first 2:15. He was 9 of 12 from the field, 3 of 3 from beyond the arc and 4 of 4 on free throws before halftime. He missed his only shot of the second half.

A short video tribute was played when the game was stopped, followed by testimonials from former teammates and fans, even some Germans, during subsequent breaks in the game.

Jason Kidd, the point guard with Nowitzki on Dallas’ only championship team in 2011 and second in the NBA in career assists, joked that he should have passed more. Steve Nash, his best friend from the early years of his career, wondered what “ball hog” was in German.

The only glitch was Nowitzki’s first attempt at 30,000, an airball on another fadeaway jumper 10 seconds into the second quarter.

Lakers: At Phoenix on Thursday.

Mavericks: Home against Brooklyn on Friday.