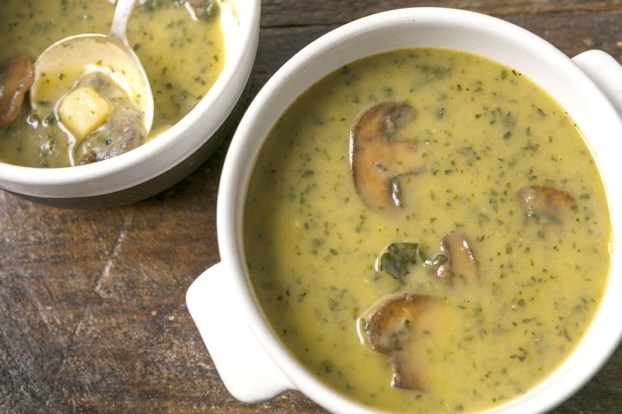 Photo by Goran Kosanovic for The Washington Post Caldo Verde With Mushrooms is a soup with kale and potatoes.

Smooth and creamy greens warm up this soup

Green drinks such as juices and smoothies may be on the cutting edge of fashionable, healthful eats, but green soups are even hotter — a claim that can at least be substantiated temperature-wise, if not trendwise.

Proof of popularity aside, there is something quite chic and modern about a soup made verdant with a blended whir of kale leaves.

Yet green soup is an old world staple, and perhaps the most well-known one is Portuguese caldo verde, which means “green broth.” It is made with potatoes and collards or kale in a garlic-seasoned broth and often fortified with slices of smoked sausage.

In this version of it, sauteed mushrooms coated in Spanish smoked paprika add a similar meaty smokiness to the bowl in a plant-based way.

I use chicken broth here, but you could substitute vegetable broth to make the soup vegetarian. Pureeing potato and greens gives this soup a thick creaminess and a fresh, grassy hue; adding an extra handful of kale in the last few minutes of cooking provides another textural dimension.

The result is an on-trend, healthful comfort-food dish that is destined to stand the test of time.

This version of the traditional Portuguese soup uses mushrooms coated in smoked paprika for meaty flavor, instead of the typical smoked sausage.

Heat half the oil in a large pot over medium-high heat. Once the oil shimmers, add the mushrooms and cook for about 12 minutes, stirring occasionally, until they have released their moisture and become well browned. Remove from the heat just long enough to stir in the smoked paprika, cayenne pepper and 1/4 teaspoon of the salt, then transfer the mushrooms to a plate.

Return the pot to medium-high heat. Add the remaining oil and the onion; cook for 3 to 5 minutes, stirring occasionally, until the onion has softened. Stir in the garlic and cook for 30 seconds.

Add the diced potatoes and broth; once the mixture begins to boil, reduce the heat to medium-low and cook, uncovered, for 20 minutes or until the potatoes are tender.

Add about three-quarters of the kale and cook for about 3 minutes, or until it is wilted yet still a vibrant green. Puree with a stick (immersion) blender directly in the pot, or in batches in a regular blender (center knob of the lid removed and covered with paper towel) until smooth, with small flecks of kale. (If you wish, reserve a few pieces of potato before pureeing, and add them to the finished soup.)

Increase the heat to medium; once the pureed soup begins to boil, stir in the remaining kale, the cooked mushrooms, the remaining 3/4 teaspoon salt and the black pepper. Cook for about 3 minutes, until that kale is wilted.

Krieger is a registered dietitian, nutritionist and author who hosts public television’s “Ellie’s Real Good Food.” She blogs and offers a weekly newsletter at www.elliekrieger.com.

Gowns and Crowns: Local contestants gear up for pageants