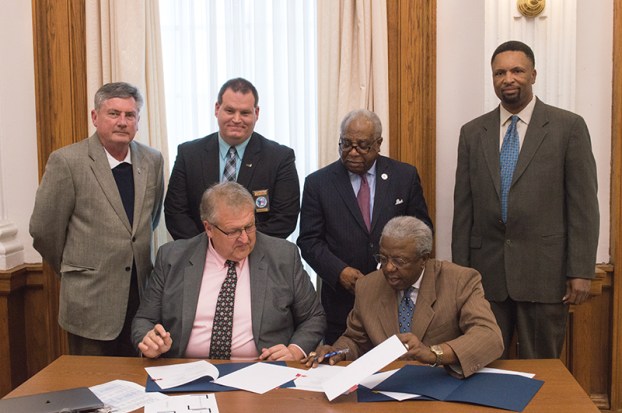 SALISBURY — Rowan County officials focused on improving the Sheriff’s Office on Monday by approving a new crime reduction unit and a scholarship program.

During their regularly scheduled meeting, the county commissioners approved the hiring of six new deputies for the crime reduction unit. The team of deputies will focus on drug-related crime, said Sheriff Kevin Auten.

In a separate vote, commissioners approved a scholarship program that would allow deputies with an associate’s degree to complete requirements for a bachelor’s degree for free at Livingstone College.

Auten said he hopes the new unit will help curtail crime and “turn our county back around.”

In a letter to county commissioners, Auten said the new deputies could have an immediate effect on crime. Auten said he hopes other programs will become available to address long-term problems associated with crime.

Commissioners proceeded relatively quickly through discussion about the crime reduction unit. Commissioner Craig Pierce asked Auten to clarify that the new deputies would not be focused solely on patrolling Salisbury. Auten said yes and said crime does not stick to specified boundaries.

Days after floating an idea for the sheriff to take over the Salisbury Police Department, Pierce also clarified that the new deputies wouldn’t impose on the duties of the Police Department.

“I don’t see the drug problem going away, unfortunately,” he said.

The new deputies will mean a $535,605 increase in county government expenditures, which includes everything from salaries to vehicles. County government would partially pay the cost with revenue from a sales tax initially passed to pay for a jail annex and telecommunications upgrades. The remainder would come from the fund balance, which partially functions as a savings account.

Auten said there are four “good candidates” for the new positions. None of the four is currently with Salisbury police, he said. He projects the first members of the crime reduction unit will start before the end of the current fiscal year — June 30.

Next up, commissioners passed the scholarship program, which started with a suggestion from former Salisbury-Rowan NAACP President Scott Teamer. Pierce said Teamer proposed the idea while wrapping up his own degree at Livingstone College.

“Not only will this help the Sheriff’s Department’s morale as well as their their recruiting abilities, but also it would go one step further to put that law enforcement official in the classrooms with the students,” Pierce said.

By interacting with sheriff’s deputies on a regular basis, Pierce said, the students will come to learn that law enforcement officers are “just normal folks.”

“They can see that it’s not them against us,” Pierce said. “It’s all of us working together.”

The scholarship program will start July 1 with a $50,000 allocation, which Pierce said would be enough for six deputies to take classes at Livingstone. The allocation comes from a tax implemented last year on services such as car repairs.

Commissioner Mike Caskey, a Charlotte police officer, praised the idea. Caskey said he hopes it can be expanded to cities and towns in Rowan County.

“Just as a law enforcement officer, I appreciate this gesture,” Caskey said. “There’s a lot of things going on today. We all know that sometimes officers don’t feel appreciated, but this is a good program.”

Teamer said he has talked with City Manager Lane Bailey and Salisbury Police Chief Jerry Stokes. Both have been supportive of implementing a similar program, Teamer said.