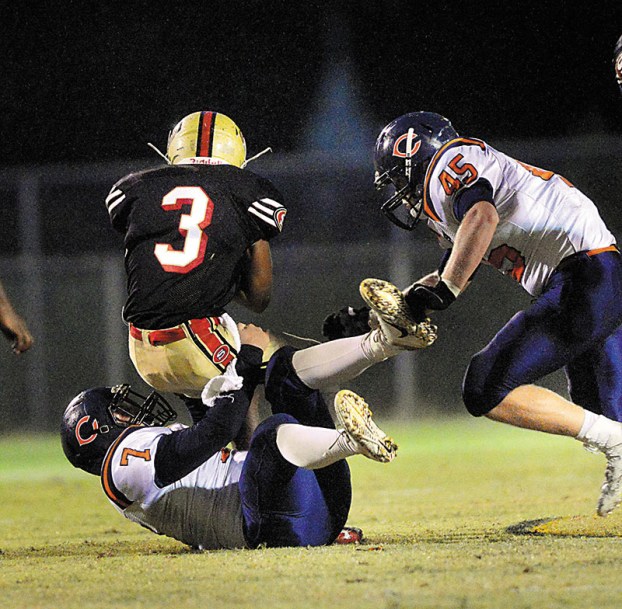 Photo by Wayne Hinshaw, for the Salisbury Post Carson’s Blake Daniels (7) sacks Salisbury’s Bo Rusher (3) with Matthew Beaver (45) coming to help during a game on Sept. 2, 2016. Beaver is going to play football at Bluefield College.

CHINA GROVE — Carson football player Matthew Beaver has experience on both sides of the line, and his crossing-over experiences are going to continue at the next level.

“I heard from Bluefield for the first time last summer when they expressed some interest, and they stayed in contact with me,” Beaver said. “I made a couple of visits and liked what I saw. They’re making a commitment to building up the football program. New uniforms, changing the weight room, the whole nine yards.”

Kids don’t grow up dreaming of suiting up for Bluefield, but for Beaver, an Eagle Scout, a Crosby Scholar and an honors student as well as an all-county football player, this is an opportunity. He’ll get to continue playing the sport he loves, while studying chemistry. His career goal is to be a pharmacist.

“He’s an unselfish kid who made a lot of sacrifices for our team,” Carson coach Joe Pinyan said. “He’s undersized for a kid who has been a lineman, so he’s going to have to find a new position, but he’s versatile. He’s got fallback options because he also has the ability to punt and kick.”

Beaver (6 feet, 215 pounds) was mostly a defensive end for Carson — and a good one — using his quickness and strength to blow up plays in the backfield.

But Carson was hurting for depth in a 4-8 season, and with his thin offensive line getting banged up, Pinyan decided to employ d-linemen Beaver and Blake Daniels as 0-line backups. Not long after that, Pinyan figured out Beaver was probably his best offensive lineman as well as his best defensive lineman.

Playing on the offensive line meant Beaver had to give up his No. 45 jersey. He traded it in for the reverse — No. 54.

“Giving up the jersey didn’t bother me at all because if playing both ways meant helping get the team on track, I wanted to do it,” Beaver said. “Playing both ways put me in a lot more of a leadership position. The biggest adjustment was giving up some practice time with the defense to help out the offense.”

Beaver also was playing special teams, so he became almost a 48-minute man for the Cougars

Beaver hadn’t expected to do any punting last season, but starter Cole Howard broke a leg in Carson’s fourth game. Quarterback Owen White stepped in as the backup punter, but White missed two games with out-of-state baseball commitments. In those two games, Beaver excelled as the punter.

Pinyan said Beaver is definitely a strong enough punter to start for a lot of small schools.

“I think punting is what is going to get me on the bus (the travel squad) for Bluefield as a freshman,” Beaver said. “As far as defense, I’ll probably be moving to an outside linebacker role.”

Bluefield was 1-9 in 2016. That’s a record that usually leads to coaching upheaval, and on Jan. 6, Bluefield announced Dewey Lusk, former head coach at UVa-Wise, was the new hire. Lusk was offensive coordinator at Webber International University last fall.

A new coach means opportunity, with everyone starting fresh, and Beaver should be able to help.

“Bluefield saw something in him that they really liked,” Pinyan said. “He’s one of those kids that’s going to give you everything he’s got every day.”

From staff reports Catawba’s bats cooled on a weekend trip to  Lenoir-Rhyne, but the pitchers came through. Hunter Shepherd, Cody... read more