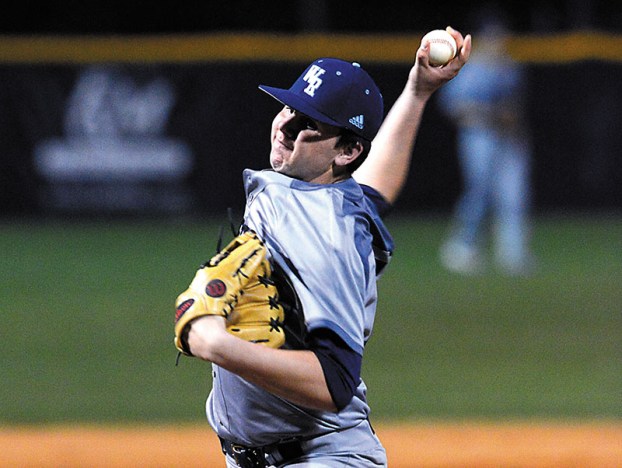 But have you met Payne Stolsworth, the right-handed pitcher who introduced himself to baseball fans with four-plus innings of stellar work Monday night?

“Right now our pitching is carrying us,” coach Seth Graham said after Stolsworth and reliever Brandon Walton pitched West past host Salisbury, 4-1. “And Payne is part of it. We’re hoping he can hold down the back of our rotation and be a No. 3 starter.”

Stolsworth was more persistent than polished for the Falcons (2-1), who won their second straight game. He allowed a first-inning run, yielded four hits and struck out five before being spelled by Walton in the bottom of the fifth.

“I was a little bit iffy because it was my first time pitching on varsity,” said Stolsworth. “But after a few batters, I was good. When I started getting guys out I felt more comfortable and just pounded the zone.”

He retired nine consecutive Salisbury hitters after surrendering leadoff hits to Joe Steinman and Griffin Myers in the first inning — then steered clear of trouble until the fourth, when Bo Rusher doubled to the fence in right field and Chandler Lippard drew a four-pitch walk. But he escaped unscathed by recording a strikeout and inducing an inning-ending double play.

“We didn’t get that timely hit,” Salisbury coach Mike Herndon said after the Hornets dropped to 1-2. “Second and third with none out and we only scored once. In those situations, we’ve got to put the ball in play, especially with two strikes.”

Salisbury went ahead on Rusher’s run-scoring groundout, only to watch West score three unearned runs against Myers in the top of the second. Two errors, two singles and the first of Austin Love’s two RBI-doubles gave WR all the runs it would need. Both fielding miscues were charged to Myers — who overthrew shortstop Will Taylor on a bunt to the left side, then hit a baserunner with a pickoff attempt at second base.

“The first one could have been a double play but I threw it over Will’s head,” Myers said. “Other than that, I pitched pretty good and our defense was solid. They had my back.”

Not to be overlooked was Griffin’s steadfast pitching. He persevered through 6 2/3 innings, threw first-pitch strikes to 19 of 29 West batters and retired 12 in row between the third and sixth innings.

“I think he’s gotten a lot stronger, spent time in the weight room and his body has changed since last season,” Herndon said. “And he’s gotten older and understands the game better.”

Stolsworth was relieved after yielding Blain Shellhorn’s leadoff double in the Salisbury fifth. Walton entered, allowed Shellhorn to steal third base, then struck out the side. By game’s end the hard-throwing right-hander had retired nine of the Hornets’ last 10 batters and recorded eight strikeouts.

“We hit the ball a little tonight,” the senior said after lacing a pair of doubles, “but our pitching was dominant. With the Legion team last summer, I had to pitch in a lot of rough situations and finished guys off. Three innings tonight — that’s the most I’ve pitched since sophomore year.”

What did Walton think of Stolsworth’s debut?

“For his first time, he did really good,” he said. “He pounded the zone and wasn’t afraid to throw the breaking ball or his off-speed stuff.”

It was the kind of stuff you had to notice.

NOTES: Love closed the scoring when he stroked a two-out double that plated teammate Timmy Wilmott in the top of the seventh. … Stolsworth threw 42 pitches and will have to rest one full day under the state’s new pitch-count rules. Walton threw 48 and must rest two days. … West returns to SPC play today when it hosts Northwest Cabarrus. Salisbury visits South Rowan on Wednesday.