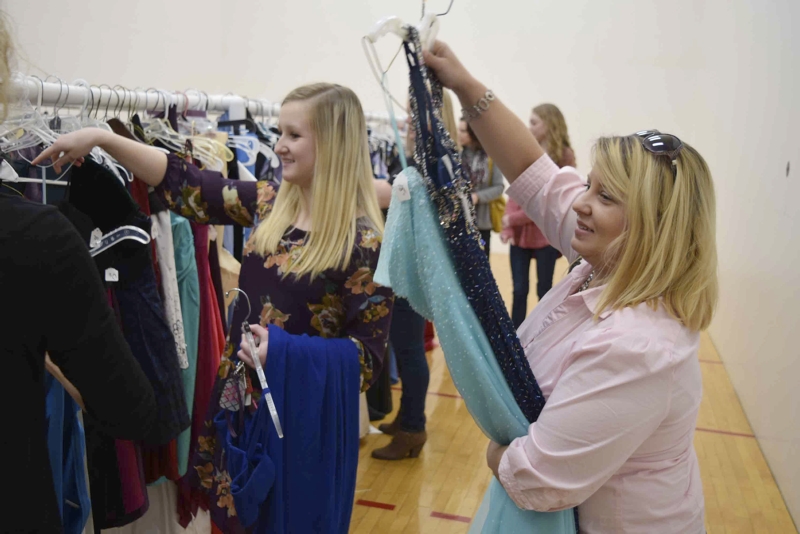 ROCKWELL — When Emily Barlow steps into the room wearing a pale blue prom dress, her father, Tom, has to cover his face with his hands. Emily pulls at the sheer fabric of the skirt and turns, showing it off. They’re both smiling.

“I can’t believe how grown up she is,” Tom tells a fellow father.

Tom Barlow is sitting in the aerobics classroom at the Saleeby-Fisher YMCA in Rockwell, which on Sunday was modified into a waiting room and tailoring corner. Women and girls of all ages take advantage of the room’s floor-to-ceiling mirrors to examine colorful and elegant dresses from all angles while volunteer seamstresses offered their expert opinions.

While these dresses — of all shapes and colors — are as fine as anything found on a rack in a store, their price tags tell a different story: $25, $15 and some as low as $5.

A regular formal or prom dress can run from $200 to $1,000, Pattie Allmond, Christian mission coordinator for the YMCA, said.

“There are a lot of girls who are not able to participate in the events offered by schools and organizations due to the dresses,” Allmond said.

It’s one reason she and the Saleeby-Fisher YMCA began the King’s Daughter Prom Closet — now in its second year. Sunday mothers and daughters traveled in from out of town to browse nearly 500 dresses offered at “drastically reduced prices” during the one-day-only event.

The gowns are second-hand, Allmond said, but something like a prom dress is typically worn only once, so the dresses are still in like-new condition. All have been donated by community members.

Allmond said the closet is there to serve the community, and to provide young girls an opportunity to feel like a princess, despite the economic hardship that often plagues the eastern section of the county.

The YMCA had considered giving the dresses away for free, but Allmond said she’d read a book that advised an approach that preserved people’s sense of self worth.

“It’s better to charge a small fee to help people maintain their dignity,” she said.

The girls still have the feeling of buying a prom dress — they still get that feeling of ownership — without having to break the bank.

“The slogan of the YMCA is ‘We build people,’ ” Allmond said, “And this is part of that.”

And all the money collected goes to the YMCA’s mission fund, which helps pay for programs and events.

All dresses and services — including tailoring, refreshments and hair and makeup tutorials — are donated.

“So essentially it’s put on by the goodwill of the community,” Allmond said.

The YMCA also struck a deal with local dry cleaners, offering those who purchased a dress a 35 percent discount if they chose to get it dry-cleaned.

The Barlows heard about the event last year, and had little time to peruse the racks before the event closed.

“So we got here early this year,” mother Rebecca Barlow said.

Emily is an eighth-grade homeschool student who hopes to attend her first prom this year. The two picked through the rows of satin and chiffon, building a pile of anything that looked like it would fit, or that Emily thought was a good color.

Shoes and other accessories were also available in limited quantities. Girls made use of the YMCA’s changing rooms, while volunteers offered opinions on dresses, helped them choose gowns from the racks and brought them new ones on request.

According to Allmond, the closet’s theme, and name, are taken from Psalm 45:11 — “Let the king be enthralled by your beauty; honor him, for he is your lord.”

“We want every girl to realize that she is beautiful and has value,” Allmond said, “Because she is the daughter of the king.”