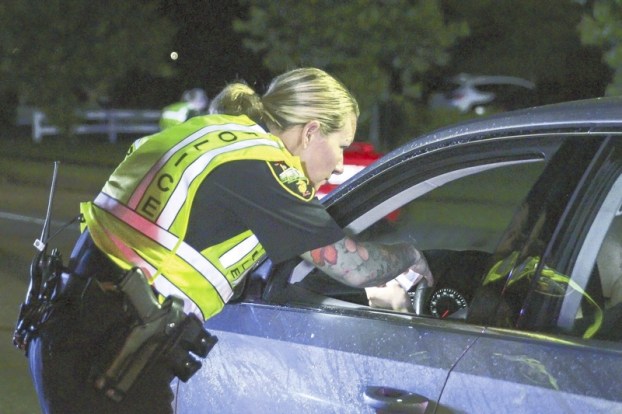 In this Friday, May 20, 2016 photo, Officer Teresa Orr with the Jacksonville Police Department speaks with a driver at a checkpoint in Jacksonville, N.C. Efforts to prevent deadly encounters between police officers and motorists, young, black males in particular, have lawmakers across the country considering changes to driver's education classes as a way to show teenagers how to react when stopped (Tina Brooks/The Jacksonville Daily News via AP, File)

What to do when pulled over: A new chapter for driver’s ed?

RALEIGH — Deadly encounters between police officers and motorists have lawmakers across the country thinking driver’s education should require students to be taught what to do in a traffic stop.

Many lawmakers want to make police interactions more transparent and improve community relations, in particular with people who feel unjustly targeted or mistreated because of their skin color.

Most don’t pretend to legislate exactly how drivers should react, leaving the details to be worked out by state law enforcement or education and driver’s license agencies. The 2017 “Rules of the Road” for Illinois, published in February, could provide a model, making detailed “suggestions” about proper driver behavior.

“The goal here is to reduce what could be a tense situation that can be very stressful on both sides,” said Dave Druker, with the Illinois Secretary of State’s Office, which oversees licensing 2.2 million new and veteran drivers annually.

The overall message? Use “a common-sense approach” and don’t be confrontational, Druker said.

Robert Dawkins, state organizer of the police accountability group SAFE Coalition NC, said it could help young drivers control their emotions at traffic stops. But he said North Carolina needs companion legislation “so that police officers can understand to control their emotions” as well, and be trained that racial profiling is unlawful.

Dawkins said that even drivers who have been taught to show “all kinds of respect” could be vulnerable if an officer sees their hands move from the steering wheel: “I make a quick movement, that that quick movement can result in me losing my life,” he said.

Law enforcement officers worry about exactly the same situation: When motorists reach under their seats to get a driver’s license, officers have to consider whether they’re reaching for a gun, said Eddie Caldwell, executive director of the North Carolina Sheriffs Association, whose organization has strongly endorsed the North Carolina legislation.

The Illinois guidelines, now included in expanded form in driver licensing materials, encourage drivers to avoid this situation by keeping both hands clearly in sight on the steering wheel “until the officer instructs them otherwise.”

Virginia Democratic Del. Jeion Ward said her measure, which the General Assembly overwhelmingly passed and is now on Gov. Terry McAulliffe’s desk, aims to make sure all young drivers are properly informed.

“Heaven help us if they are getting information off of YouTube or the internet,” Ward said. “We just have to make sure that our young drivers have the correct information so simple infractions will not become something more serious.”

The Illinois guide focuses on driver responsibilities, while addressing officer behavior in several sentences at the end.

It says “a driver is to be treated with dignity and respect by law enforcement officers,” and that drivers should report what they consider to be inappropriate conduct to the officer’s superiors as soon as possible. It also notes that “officers are required to provide their names and badge numbers upon request.”

The American Civil Liberties Union’s online “know your rights if you’re stopped in your car” guidelines include some identical suggestions, and adds several more: It says drivers should turn off the engine, turn on the internal lights and open the window partway before placing their hands on the wheel, presumably to reduce the need for any risky movements.

The ACLU also says drivers can refuse a search request, but that officers don’t need consent if they believe the car contains evidence of a crime. And it notes that both drivers and passengers have the right to remain silent. Passengers can ask if they’re free to go; “If yes, silently leave,” it says.

The proposed North Carolina curriculum would be developed in consultation with the sheriff’s association, the state Highway Patrol and a group representing police chiefs. Civil liberties groups aren’t listed in the bill.

“Anything that keeps the rancor and stupidness from going on inside of a car when there is a minor traffic violation, we’re all for,” Robinson said.

North Carolina’s legislation is getting bipartisan support, with more than 35 House sponsors, black and white, from both parties.

“It’s just a public safety issue,” said Republican state Rep. John Faircloth, the former High Point police chief. “I think all of us want to do anything we can to make the public safer out there, and to not put our officers in a situation where they might make the wrong decision.”

Andre Peterson, 35, a black father of two daughters, said he thinks it can help young people know what’s expected of them.

“Compliance is a big issue between police and the people-of-color community,” Peterson said while attending a civil rights rally in Raleigh. “If you show respect, you’ll get it back in return.”