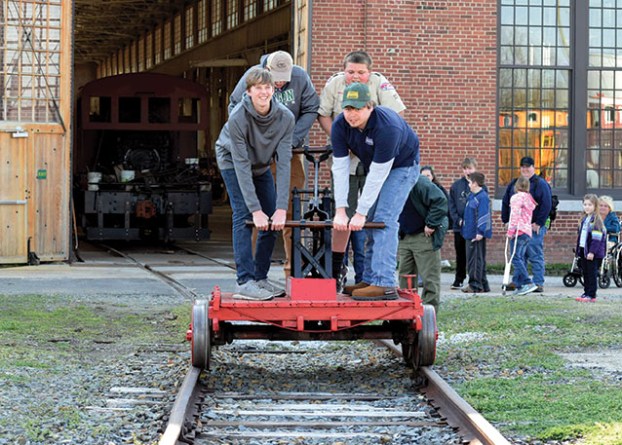 The Rail Camp, held twice a year at the N.C. Transportation Museum in Spencer, gives Boy Scout troops from all across the Southeast a chance to camp out and learn about railway history. At the end of the weekend, campers can earn a merit badge and an event patch. Rebecca Rider/Salisbury Post

Boy Scouts on board for Rail Camp’s 21st year

SPENCER — For two weekends out of the year, the 60-acre grounds of the N.C. Transportation Museum turn into a lively sea of tents and campfires as Boy Scout troops flood in from across the Southeast.

Lucas Safrit, historical interpreter and scouting coordinator with the museum, said the “Rail Camps” attract nearly 1,000 Scouts every year from across the region.

“We’ve had Scouts come from as far as Missouri before,” he said.

The spring camp began Friday evening, with approximately 150 Scouts setting up camp on the museum grounds. They hailed from the Carolinas, Virginia and Georgia. During the October 2016 session, Safrit estimates the camp had nearly 850 Scouts.

“It was tent city,” he said of the fall session.

This is the 21st year the N.C. Transportation Museum has held the camp, which teaches Scouts about railroad safety, history and its role in building America. The camp started back in the ’90s, when the county decided to hold a “camporee” that the museum hosted.

“The museum liked it so much they decided to do their own,” Safrit said.

The Rail Camps are hosted twice a year, once in October and once in March, and give Scouts the chance to earn a railroad merit badge. It’s an elective badge — not required to reach Eagle Scout — but Safrit calls it the “bread and butter of the event.”

Campers are also given an event patch.

Unlike most scouting excursions, the Rail Camp is more of a fun, program-based experience.

“This is more of a kind of relaxed kind of camp,” Safrit said.

Scouts set up camp Friday evening, and then go through programs on Saturday — including classes, a flag race and a “campfire” where they gather to do skits and sing songs. They’re also given free-time to explore the museum and the grounds and to take a train ride. Safrit said the museum is considering incorporating a backpack hike through the 60-acre property.

In its 21 years, the Rail Camp has blossomed — a success Safrit attributes to word of mouth. Scout troops who attend and have a good weekend go home and tell others, and the cycle continues.

“That gets the bug,” Safrit said.

Troop 221 out of Lexington heard about the camp from a few weeks ago from a fellow Scout who brought in a flier. A week later, the entire 26-member troop signed up to go. It was the first time the troop attended the Rail Camp. Jerry Bishop, the troop’s assistant scout master, said the group goes camping once a month “rain, sleet or snow,” but this weekend is more of a fun trip.

During free time on Saturday, members of the troop gathered around a fire burning in a metal barrel to work on their applications for the railroad merit badge. Scouts said they’d enjoyed the experience, and Bishop said the camp was “well worth it.”

But by Sunday morning, the campers cleared out, leaving the grounds as though they were never there.

Feedback from Scouts, troops and volunteers helps the museum improve the experience every year, Safrit said. Thanks to community input, this year for the first time in Rail Camp history, the museum is hosting a camp weekend for Girl Scouts that will mirror the regular camp experience, to be held March 24-26. There will also be a day trip for Cub Scouts on May 6.