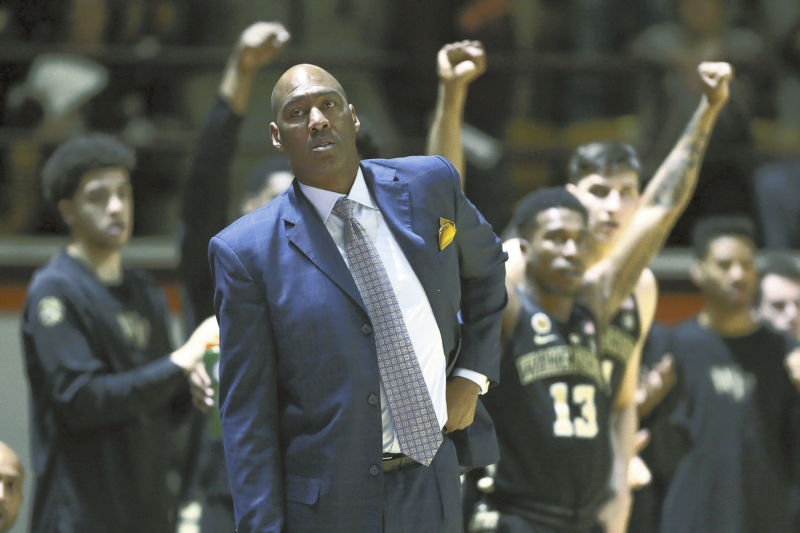 Wake Forest head coach Danny Manning watches from the bench during the first half of an NCAA basketball game against Wake Forest, Saturday, March 4, 2017 in Blacksburg, Va. (Matt Gentry/The Roanoke Times via AP)

“I thought we got contributions from a lot of different guys,” head coach Danny Manny said after the game.

“We’re not invincible; anyone can be beaten on any given day. We need to know that. We’ve been in so many close games,” LeDay said.

After outshooting the Deacs by a 2-to-1 ratio early, the Hokies hit a flat spot midway through the first half before catching a second wind. A Tech lead that had been whittled to 3 swelled to 11 with five minutes left but Wake Forest battled back again. The Hokies led 47-42 at the break.

Wake Forest forward John Collins came into the contest having scored 20 points or more in 12 straight contests (the longest ACC streak in three years) but he picked up three fouls before halftime and was scoreless (0-for-1 shooting) in the first half.  “We just put the next man up,” Manning said.

Collins warmed up after the break with 13 points that helped the Deacons claw back for the victory. “Offensively I thought the ball moved a lot better in the second half,” Manning said.

The Deacons shot 21 of their 33 free throw attempts in the second half.

“There was a stretch where they called about like five (fouls) in a row,” Seth Allen said. “The free throw difference was a really big key.”

Said Hokies’ coach Buzz Williams: “I didn’t think we played with the heightened level of energy that we have to play with.”

Wake Forest attacked the interior more in the second half to earn the comeback win. “We were able to play some zone defense (in the second half) and Virginia Tech missed some shots that they normally make,” Manning said.

Virginia Tech finished shooting 51.7 percent for the game — Wake topped that at 53 percent with a strong second half. “We didn’t play with a big enough sense of urgency as a team on defense,” Allen said.

Virginia Tech: The loss against Wake Forest on Senior Day at sold out Cassell Coliseum prevented Virginia Tech from reaching 11 conference wins in a season for the first time since joining the league in the 2004-05 season. Present to watch the season-ending loss was retired head football coach Frank Beamer.

Wake Forest: coming in after upsetting No. 8-ranked Louisville, the Demon Deacons most likely needed the comeback win over Virginia Tech to keep any March Madness hopes alive.

The Hokies head to the Barclays Center in Brooklyn, NY for the ACC Men’s Basketball Tournament (March 7-11). Virginia Tech has already earned a first round bye, with its first opponent yet to be determined. Virginia Tech is the seven seed. Wake Forest will be a 10 or 11 seed. The Hokies and Demon Deacons will match up again if Wake beats Boston College in the opening round. Williams thinks this may be one of the best ACC tourneys ever. “Tt’s easy to be a fan of this league.”

“It’s a good thing and a bad thing,” Hokies senior guard Seth Allen said about losing a game where they led most of the games. “You learn from it. It’s going to be an early vacation if we don’t make stops (on defense).”

Everyone knows that the Hokies bench is thin, especially with Chris Clarke done for the season. Tech’s bench scored two points on Saturday; Wake Forest had 16 from its subs.