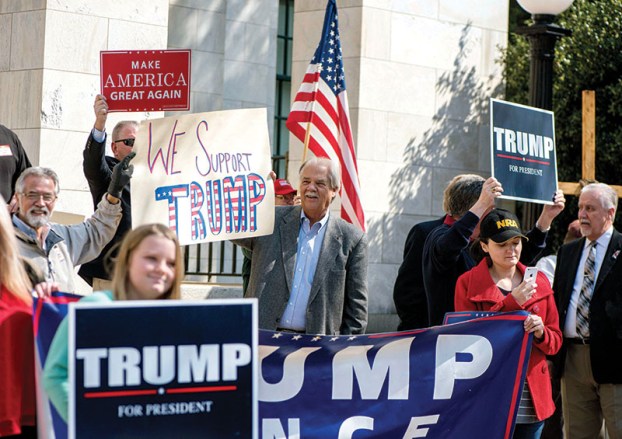 SALISBURY — Local Republicans took to the streets, or at least the sidewalk, on Saturday as part of a “March of Trump.”

After holding their annual convention on Saturday, about 30 local Republicans gathered at noon outside of the county’s administration building to chant and hold up signs in support of President Donald Trump. Some were signs from the 2016 presidential campaign. Others were homemade and included statements such as “we support Trump” and “honk for Trump.”

Outgoing Rowan GOP Chairman Stephen Kidd said the party held Saturday’s rally to provide an example of how to hold a peaceful rally.

“The other side feels like demonstrating includes breaking windows, but that’s not our style,” Kidd said during the convention.

A “March for Trump” rally was also held in Raleigh on Saturday. Kidd said the Rowan County GOP decided to have its own event, too.

A few officers from the Salisbury Police Department parked in the area and spoke with both sides. The anti-Trump group eventually dispersed. Republicans continued the rally until 12:30 p.m.