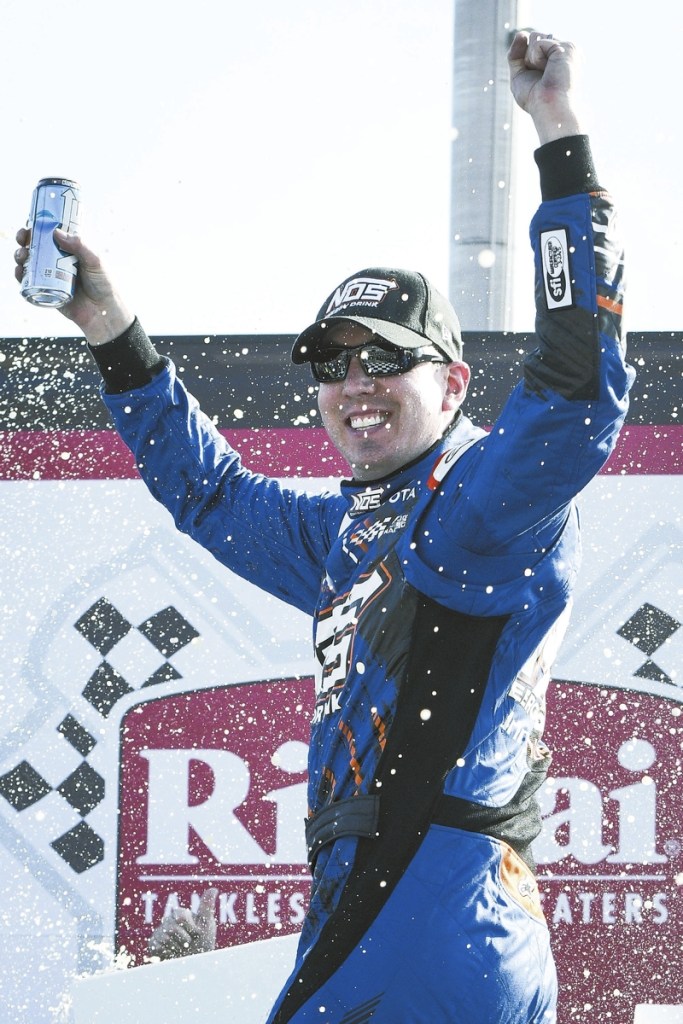 Kyle Busch celebrates in Victory Lane as he gets out of his car after winning a NASCAR Xfinity auto race at Atlanta Motor Speedway in Hampton, Ga., Saturday, March 4, 2017. (AP Photo/John Amis)

HAMPTON, Ga. (AP) — After a bunch of close calls at Atlanta Motor Speedway, Kyle Busch has found the winning touch in the NASCAR Xfinity Series.

Busch cruised to his second straight Atlanta victory in the second-tier series Saturday. With a helping hand from lapped cars, the pole-winner was able to hold off fellow Cup driver Brad Keselowski by 0.606 seconds.

No one else was within 2 seconds of the front.

But Busch’s triumph was tarnished several hours after the race. NASCAR officials announced that the No. 18 machine failed a post-race inspection, with both the right and left front measuring too low.

The car will be taken to the Research & Development Center near Charlotte for further testing, with any penalties to be announced next week. The team could face a loss of points and a suspension for its crew chief.

“Fantastic,” Busch said sarcastically. “I guess I’ll have to figure out who I’m working with next week.”

Before the 2016 race, Busch had five runner-up finishes, plus third- and fourth-place showings on the 1.54-mile trioval south of Atlanta.

“It took so long to get here to begin with,” he said in Victory Lane. “Now we’ve won two in a row. That feels so good.”

Keselowski won the first 40-lap stage, while Kevin Harvick took the next 40-lap phase. But it was Busch was leading at the end — a promising start to a busy weekend in Atlanta, where he was competing in all three of NASCAR’s top series.

After celebrating with his team and making a brief stop in the media center, he hustled back to pit road for the Truck Series race.

On Sunday, Busch will start on the inside of the second row in the Monster Energy Cup race.

“It’s kind of a refresher course each and every year to run Saturday and get what I need to know on Sunday,” he said. “I learned a couple of things that I might’ve forgotten about. Hopefully I can use some of those things in my Cup car.”

Harvick led 64 laps — more than any driver — but got shuffled back to fourth at the finish. He will start from the pole in the Cup race.

Lapped cars prevented Keselowski from mounting a serious challenge to Busch in the closing laps.

“It’s always a game of cat and mouse, but sometimes it feels like chicken,” Keselowski said. “I kept losing one or two car lengths every time I’d go through traffic.”

It was an impressive run by the 19-year-old Byron, whose radio did not work properly. He was able to hear his crew but wasn’t able to speak with them, forcing the team to work out a system where he signaled them coming into the pits to indicate what adjustments he needed.

“I would stay on the yellow line a certain way,” Byron said. “It was actually pretty seamless. But hopefully I don’t have that issue next week.”

Driving for Kyle Busch Motorsports, Bell started from the pole, took the first two 40-lap stages and passed Crafton for the lead with 16 laps remaining.

The 22-year-old stretched the margin to more than 2 seconds, but Crafton caught a break when Grant Enfinger got into Austin Cindric going through the trioval, sending Cindric into a spin. The incident brought out a yellow flag, setting up a green-white shootout to the checkered flag.

Crafton got a good jump on the outside and briefly stuck a nose in front going down the backstretch. But Bell’s truck was simply too strong, allowing him to reclaim the lead and cruise to a 0.447-second victory, his third career Truck Series triumph.

“I was just trying to do everything I could to make sure I got a good restart,” Bell said. “It was really fast all weekend, just a dream machine.”

Crafton, a two-time series champion, did all he could to pick up his 14th career victory.

But the outside spot proved to be challenging on the restarts all day.

“I could hear (Bell) down there spinning his tires,” Crafton said. “I was like, ‘Keep spinning, Chris.’ Then we would’ve had a shot.”

Busch, coming off a victory in the Xfinity Series race earlier in the day, failed to complete a sweep of the Atlanta doubleheader. He cut a tire on a restart, skidded into the wall and wound up 26th.

His young teammate’s performance made that disappointment easier to take.