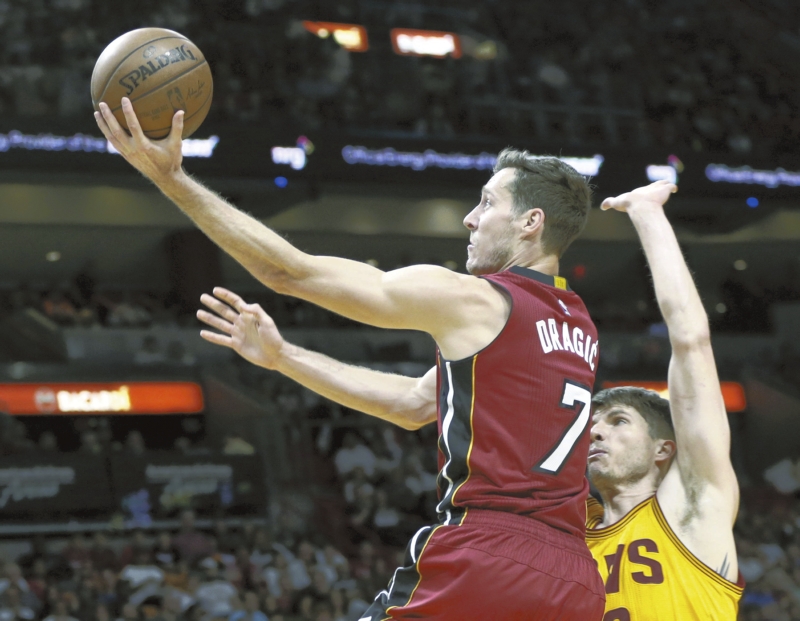 Miami Heat's Goran Dragic (7) drives to the basket as Cleveland Cavaliers' Kyle Korver defends during the second half of an NBA basketball game, Saturday, March 4, 2017, in Miami. The Heat defeated the Cavaliers 120-92. (AP Photo/Lynne Sladky)

DENVER (AP) — With Frank Kaminsky out, the Charlotte Hornets needed someone to step up at the end of a long road trip.

It ended up being a journeyman playing on his third 10-day contract of the season.

Johnny O’Bryant scored a career-high 15 points against his former team to supplement Kemba Walker’s 27, and Charlotte beat the Denver Nuggets 112-102 on Saturday night.

Nicolas Batum had 21 points and eight assists and Marvin Williams had 14 points and 12 rebounds for the Hornets, who wrapped up a seven-game road trip with an impressive victory with the help of O’Bryant.

“Johnny O’Bryant was great,” Charlotte coach Steve Clifford said. “It’s a little bit difficult because he hasn’t been here very long, but he hit a big shot and we were fairly organized when he was on the floor. He gave us a big lift.”

O’Bryant was signed Feb. 24 after playing on two 10-day contracts with Denver in January and February. He had seven points in the fourth quarter when the Hornets held off a late rally to win for just the fourth time in the last 14 games.

O’Bryant had a little inside knowledge after spending 20 days with the Nuggets, and it helped him Saturday with Kaminsky sidelined with a sprained left shoulder suffered Thursday in Phoenix.

“More than anything it gave me confidence,” O’Bryant said of his time with Denver. “I played well with them when I did get minutes.”

The Nuggets came out flat after two impressive road wins in the middle of the week. Nikola Jokic led them with 31 points and 14 rebounds, while Danilo Gallinari scored 22 points.

Charlotte took the lead for good with a 17-0 run late in the first quarter and then scored the first 10 points of the third to go up 71-52.

The Hornets led by as many as 20 in the third before Denver made a run to get it under 10 on Mason Plumlee’s three-point play with 7:13 left. Marco Belinelli answered with a corner 3-pointer – his only points of the game – to push the lead to 100-89.

Denver got within four with 4:33 left, but Charlotte scored nine straight, including a big 3-pointer by Walker, to go back up by 13 and closed it out at the line.

“At that moment, we weren’t scoring, so I wanted to create some space and get to my shot, and that’s what I did,” Walker said. “That’s a shot I’ve made all year.”

Hornets: Charlotte finished its longest road trip of the season with a 3-4 record. … The Hornets held Denver to 45 percent shooting after Phoenix hit nearly 60 percent of its shots Thursday. … Walker and Batum have combined to score at least 20 points in eight games this season.

Nuggets: G Gary Harris, the team’s fourth-leading scorer, went without a point and missed the only shot he took. … F Kenneth Faried missed his fourth straight game with low back soreness. He first hurt it against Brooklyn on Feb. 24 and hasn’t played since. … G Emmanuel Mudiay was back to third string after playing 18 minutes in Milwaukee on Wednesday.

BIG LOSS IN THE MIDDLE

Kaminsky, Charlotte’s 7-foot center, is expected to miss several games. Kaminsky, who averaged 17.9 points a game since Feb. 1, was hurt in the fourth quarter of Thursday’s loss to the Suns.

He will get an MRI done on the shoulder once the Hornets return home.

“Right now, it’s day-to-day, depending how he progresses these next two days,” Clifford said. “Typically, that injury would be 10 days to two weeks.”

Tyler Johnson added 17 points for the Heat, who won for the 18th time in their last 22 games.

LeBron James and Kyrie Irving sat out for Cleveland, both getting the night off to rest. The Cavaliers fell to 0-5 this season when James isn’t in the lineup, and continue to be without two other would-be starters in Kevin Love and J.R. Smith — both still recovering from surgeries. Newly signed center Andrew Bogut also wasn’t with the Cavaliers.

Channing Frye scored 21 points and Kyle Korver added 15 for the Cavaliers, who have lost their last 12 games in Miami. This one was largely drama-free until the final seconds, when players from both sides did a little shouting back and forth, with Miami’s Dion Waiters — a former Cavs guard — among those most upset.

CHICAGO (AP) — Reserve Jamal Crawford scored 25 points and took over down the stretch to carry Los Angeles over Chicago.

Crawford, a former Bulls guard who won his third Sixth Man of the Year award last season, scored 10 points in a 14-7 spurt in the fourth quarter as the Clippers won for just the second time in six games.

Chris Paul added 17 points and Blake Griffin had 16 for Los Angeles, which lost in Milwaukee on Friday and had fallen to the fifth spot in the Western Conference standings.

Jimmy Butler scored 16 points for the Bulls, who had won five of their last six games.

HOUSTON (AP) — James Harden scored 33 points and Clint Capela had 24 to help Houston build a big lead in the third quarter and coast to a victory over Memphis.

Eric Gordon added 18 points and made six of Houston’s 18 3-pointers in the victory that tied the season series with the Grizzlies at 2-2.

Houston led by 15 to start the fourth quarter and was up 109-89 after an alley-oop dunk by Capela midway through the quarter. The Grizzlies resorted to the Hack-a-Shaq technique of intentionally fouling Capela soon after that, but he made eight of 10 attempts before going to the bench with Houston up by 16 with about 3 ½ minutes left.

Mike Conley had 23 points for the Grizzlies and JaMychal Green added 20.

Malcolm Brogdon had 17 and Spencer Hawes finished with 16 off the bench for Milwaukee, which halted a seven-game losing streak to Toronto.

Serge Ibaka had 19 points and Cory Joseph 14 for Toronto.

The Bucks entered the fourth quarter with a 13-point lead but the Raptors got within four about halfway through the period. Back-to-back baskets by Antetokounmpo put Milwaukee back in control and the Raptors got no closer than seven points the rest of the way.

After ice-cold shooting in the first quarter, the Bucks scored 41 points in the second to grab a 53-42 lead at the half. Hawes had 14 points in the period.

PHILADELPHIA (AP) — Kentavious Caldwell-Pope scored 13 of his 26 points in Detroit’s dominating third quarter, and the Pistons set a season high for points.

The Pistons, holding the final playoff spot in the Eastern Conference, had lost two of three, including Wednesday’s 109-86 drubbing at New Orleans that resulted in coach Stan Van Gundy calling out point guard Reggie Jackson.

Van Gundy told reporters Friday that he wanted to see Jackson play with more energy and contemplated starting backup point guard Ish Smith over Jackson on Saturday. Jackson, though, did make the start and scored 21 points.

Marcus Morris scored 22 points, Tobias Harris added 20 and Andre Drummond had 14 points, 14 rebounds, four steals and three blocks, one game after getting ejected for swatting the Pelicans’ Tim Frazier in the back of the head.