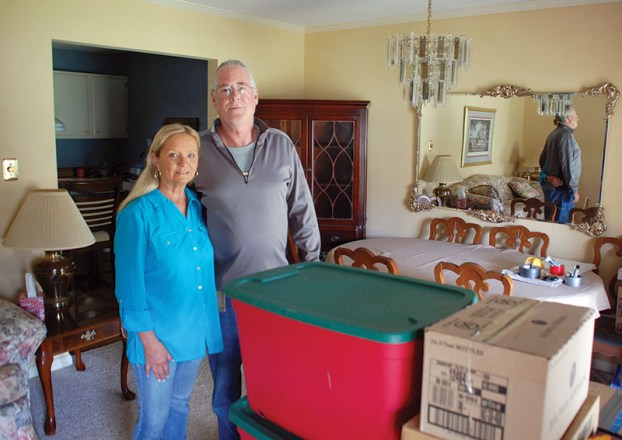 Cindy and Sam Penegar stand next to a stack of living room boxes and containers, some of the few which will be going with them to their 400-square-foot house on the coast.

‘You can make a change, you just have to face it’: Penegars simplify their lives

SALISBURY — When the new year arrived, Sam and Cindy Penegar started tossing around the idea of relocating, and along with it, drastically downsizing their lives.

Just to see what might happen, they stuck a for-sale-by-owner sign in their front yard on Windsor Drive. A couple soon came to see their Eagle Heights home on a Monday and made an offer on it by the following Friday.

By Jan. 26, the Penegars had ordered a “tiny house” and were committed to moving to Surf City at the coast, where they would be 30 minutes from their first grandchild.

To call this a downsizing and a life-changing experience doesn’t do it justice.

Sam and Cindy grew up in Salisbury, and they started dating each other as juniors in high school. They’ve been married 37 years. For the past 27 years, the Penegars have lived in their 2,600-square-foot home.

The tiny house they will be moving into is 399 square feet.

At the coast, the Penegars plan to enjoy their 23-foot boat, wear their bathing suits most every day and live in an RV community on the intracoastal waterway.

“We may be growing older,” Cindy says, “but we’re not growing up.”

The closing date for the sale of their Salisbury home is Friday. They expect delivery of the tiny house in Surf City March 15. When they leave Salisbury, the Penegars will have what’s left of their worldly possessions in a U-haul trailer.

“This is my life, this is what’s left of it,” Cindy says, sitting near the small island of containers and boxes in the living room.

In a moment, she corrects herself.

The decision to move to the coast wasn’t as difficult as you might think. For a couple of years, the Penegars had a 40-foot trailer in the same RV community — “adult summer camp,” Sam calls it.

And because of their young grandson, the boat and Sam’s parents’ place at Atlantic Beach, the Penegars were spending big chunks of time on the coast.

They realized they were coming home to Salisbury mostly to check on the mail, pay the bills and go to doctor appointments. Within 24 hours of being back, they were missing the coast and the infant grandson.

“I didn’t want to be four hours away,” Cindy says.

They also learned that even when you’re not living in your house much, “your house still gets dirty,” Cindy says. The big, tri-level home requires a good 2,300 steps to clean — they’ve measured it.

The Penegars had a long discussion with sons Tre and Michael and their wives, Kathryn and Lisa, respectively. The suggestion rose that the Penegars should find a place halfway between the boys, but the coast made more sense now.

Plus, the tiny house always can be moved easily in the future. Maybe that will happen, since Michael and Lisa, who live in Denver (N.C.), are expecting their first child in June.

The coast also seemed right because the Penegars already have done what they refer to as their mountain thing. Both sons attended Appalachian State University, so the Penegars bought a house in Boone, where the boys could live while they were in school.

It also served as the couple’s mountain home from which to hike and ski. They sold the house after the boys were through college.

Maybe it was for the best, but the speed in which the Penegars had an offer on their house forced them to move quickly.

“That lit a fire under us,” Cindy says.

At first, they enforced a two-year rule: “If you haven’t used it in two years, get rid of it,” Cindy says.

Penegar was a longtime probation officer for the state until he became permanently disabled in 2012. The multiple sets of stairs at the Windsor Drive house were becoming troublesome because of the nerve damage in his legs.

And though the house has three bathrooms, you have to go up or down a set of stairs to reach them.

Cindy is a retired N.C. Department of Corrections employee who for three weeks — 21 straight days — was a whirlwind on Windsor Drive, working nonstop from 7 a.m. to 4 p.m.,

“It’s was overwhelming in the beginning,” Cindy says, “but it’s now more of a relief every hour.  … You can make a change, you just have to face it.”

The Penegars conducted four yard sales in one week. Even though it was February, the unseasonably warm weather cooperated nicely.

They sold their Bow Flex exercise machine to Rufty-Holmes Senior Center. They donated 41 bags of clothes, shoes and linens to the Kidney Foundation. They struck a deal with an auction company to take all of their furniture and sell it at a 30 percent commission.

Getting rid of 27 years worth of life’s accumulation was a monstrous undertaking. The house has five bedrooms, and the 700-square-foot basement alone is way bigger than the tiny house to which they are moving.

Sam is keeping the beautiful grill that was part of his elaborate outdoor kitchen. He also is taking his tools and stereo equipment with him, but that’s pretty much it.

He’s leaving the pool table with the new owners and giving up his cherished French foosball table. Sentimental keepsakes such as the kids’ old report cards were looked at and appreciated before they went into the trash.

“I downsized pictures, believe it or not,” Cindy says.

In taking care of the house and all of its stuff now, the Penegars think they’ve done their children a huge favor for the future, though that really wasn’t their intent.

They’ll miss the Windsor Drive home. This used to be a gathering place for the boys and their friends, as it also was, because of its size, for the extended Penegar family over holidays.

“This was a good house to raise kids in because you can hide,” Cindy says.

Sam says this major downsizing and move just represents another of life’s chapters.

The couple have been surprised at how so many things fell into place — the quick sale of the house, the ordering of the tiny house, the good weather in February and the sale (without advertising) of the 40-foot trailer in Surf City.

“This has all happened so fast,” Cindy says. “I have just had to think it was meant to be.”

Tiny houses fall under a broad definition, Sam says, but he likes the heavy, 2-by-4 wood construction of the Park model by Skyline they have chosen. They bought the tiny house from Camptown RV of Peletier.

Resting on three axles and a tongue, it will be strapped down in the Surf City RV community, not placed on a foundation, Sam says. It comes furnished, and basically all the Penegars will have to do is to turn the key and walk in.

The model includes a living room, kitchen, bathroom, downstairs bedroom and stairs to two small lofts, one of which Sam will use for a music room. Whatever few things she buys new for the tiny house will match, Cindy promises, and she names dishes as an example.

The place doesn’t have a washer or dryer, but the community’s laundromat is close. The Penegars will rent a storage unit for a while, until Cindy can go through and decide on the fate of what’s left.

The couple don’t think they are abandoning Salisbury. They will be returning at times to visit with Sam’s parents and see old friends.

But this experience of leaving and drastically downsizing has been as liberating as it has been bittersweet.

In all the cleaning out, selling, giving and throwing away that has happened in recent weeks, the Penegars found something they can’t explain — a lone seashell in the backyard.

If ever there were a sign or omen, this was it.

“It’s going to always be with me,” Cindy says.

1. Two public officials — one a Rowan County commissioner, the other a Salisbury city councilman — have floated the... read more