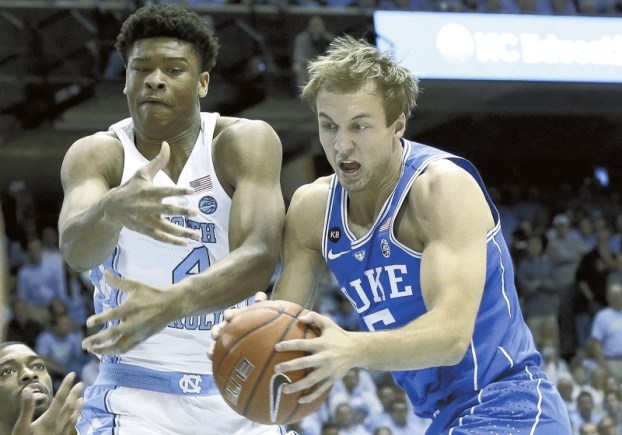 CHAPEL HILL  (AP) — Joel Berry II and his North Carolina teammates had already wrapped up an Atlantic Coast Conference regular-season title and a No. 1 seed in next week’s tournament before tipping off against rival Duke.

Still, the fifth-ranked Tar Heels wanted to fight their way to a strong finish — the kind they hope can help propel them to another deep postseason run.

Berry scored 28 points, including a critical late-game burst of seven straight for his team, and UNC held off No. 17 Duke 90-83 on Saturday night.

Sound familiar? It should. The Tar Heels did exactly that last year in the final week of the regular season, then rolled to their first ACC Tournament title since 2008 and pushed all the way to the NCAA championship game.

“I think our guys did a great job of just focusing in on the game today and not worrying about (how) if we lose, we’re still the ACC champs,” Berry said, adding: “This gives us a little confidence going into the ACC Tournament, just like last year.”

Isaiah Hicks scored 21 points for the Tar Heels, who battled through a nearly shot-for-shot fight with their fiercest rival to finish unbeaten at home. The game featured 24 lead changes and 14 ties before UNC finally pushed ahead for good in the final six minutes, with its final margin the biggest lead for either team all night.

“You saw a game where a lot of guys played well,” Duke coach Mike Krzyzewski said. “And that’s it. Sometimes, it’s not nuclear science here. It’s that easy.”

Berry shot 9 of 14 and made all five of his 3-pointers to offset a tougher shooting night for leading scorer and ACC player of the year candidate Justin Jackson.

“You know what? Big-time players have got to make big-time plays in big-time games,” UNC coach Roy Williams said.

Berry had 19 points by halftime.

“He got in a groove early. We had a couple miscommunications on the defensive end that got him those open shots,” Duke’s Matt Jones said, adding: “You can’t let a good player get in their comfort zone.”

Luke Kennard, another league player of the year contender, finished with 28 points to lead the Blue Devils.

Duke: The Blue Devils were playing to secure a top-four seed in the ACC Tournament and the double-round bye that comes with it. The nation’s preseason No. 1-ranked team instead ended up with the No. 5 seed and a single-round bye in Brooklyn.

North Carolina: The Tar Heels had clinched the ACC Tournament’s No. 1 seed last weekend and earned the outright regular-season title with No. 8 Louisville’s home win against No. 19 Notre Dame earlier Saturday. This win closed out UNC’s first perfect record at the Smith Center since 2011.

Duke’s Grayson Allen finished with 14 points, though he missed three free throws in the final 3½ minutes as Berry and the Tar Heels made their move.

Already the subject of every-play scrutiny following a series of tripping incidents, Allen also received a technical foul for hitting defender Brandon Robinson in the head with an elbow while being fouled on a first-half drive. Allen he was booed loudly every time he touched the ball all night.

UNC: The Tar Heels shot 51 percent and finished with a 15-5 edge in second-chance points. … Jackson scored 15 points on 6-for-17 shooting while going just 1 of 7 on 3-point tries — though his only make came during the Tar Heels’ game-clinching burst. … Hicks, who sat out the first meeting due to a hamstring injury, had a game-high nine rebounds.

Duke: The Blue Devils will open play in the ACC Tournament in Wednesday’s second round.

North Carolina: The Tar Heels will open play in the ACC Tournament in Thursday’s quarterfinals.

By David Shaw sports@salisburypost.com LANDIS — Someone must have paid the electric bill at South Rowan. Three days after managing... read more