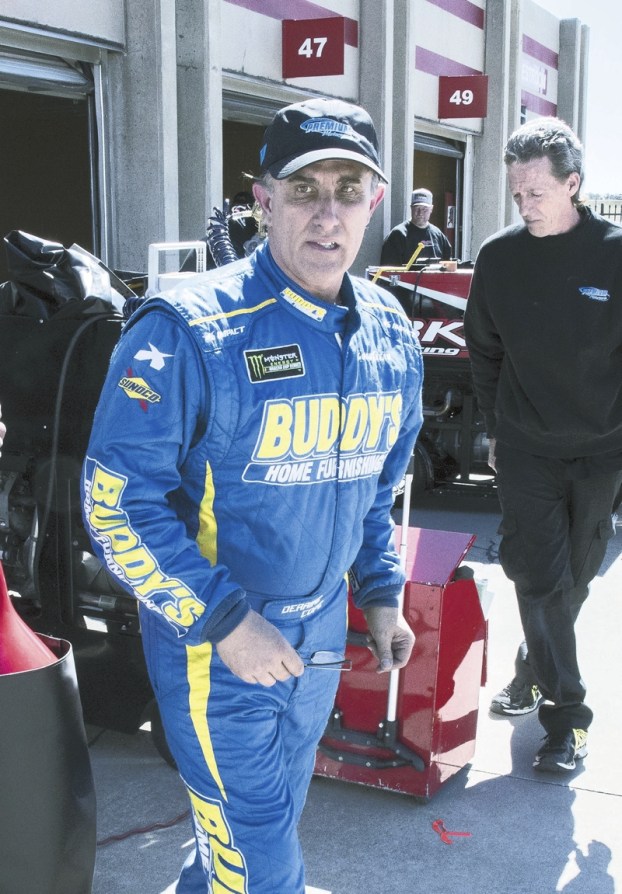 Driver Derrike Cope, left, leaves the garage after practice for the NASCAR Monster Energy Cup auto race at Atlanta Motor Speedway in Hampton, Ga., Friday, March 3, 2017. Cope won the Daytona 500 in 1990 and can't walk away from a sport that has defined his life. So here he is, at age 58, with a bare-bones racing operation, preparing for his first NASCAR Cup race since 2009. (AP Photo/John Amis) FILE – In this Feb. 18, 1990, file photo, Derrike Cope hoists his trophy high in Victory Lane after winning NASCAR Daytona 500 auto race at Daytona International Speedway in Daytona Beach, Fla. Cope won the Daytona 500 in 1990 and can’t walk away from a sport that has defined his life. So here he is, at age 58, with a bare-bones racing operation, preparing for his first NASCAR Cup race since 2009 at Atlanta Motor Speedway. (AP Photo/Kathy Willens, File)

HAMPTON, Ga. (AP) — When Derrike Cope climbs out of the No. 55 car, his work is just beginning.

He jogs about the garage with the urgency of a crew member, paying special attention to the shocks he built himself.

Then, checking the time, Cope hustles to the hauler to change out of his racing suit. Emerging a short time later like Superman through a revolving door, he’s off to sign autographs at a local tractor company, which chipped in some bucks to his bare-bones operation.

When that’s done, Cope rushes back to Atlanta Motor Speedway for evening qualifying.

It’s hardly a glamorous life, certainly not what one would expect from a racer who’s been to the mountaintop.

Cope doesn’t find any of this beneath him.

It’s all about passion, not pride.

“I feel like a kid again,” Cope said Friday, relaxing in his hauler during a few minutes of down time.

At age 58, he’ll be the oldest driver in Sunday’s NASCAR race by more than a decade, competing against a bunch of 20-somethings and even a teenager (18-year-old Gray Gaulding). Driving for underfunded Premium Motorsports, his car adorned with sponsors such as Wade Tractor and Equipment and Glenn Brown Trucking, Cope has no chance of keeping up with the powerhouse teams and their millions in funding.

That’s not really the point.

“You know when you make a good lap,” Cope said. “You know when you’re driving the car, when you’re manipulating the car and making good things happen with whatever equipment you have. So, the mindset is just to go out there and be proficient as you can, still drive within yourself and the equipment. I’ve been around these places a lot. I know every nook and cranny. I know what the car going to do as far as losing grip and all those things. I’m just trying to stay within what the car will give me.”

This will be Cope’s first Cup race since 2009, just his second in the past decade.

He’s as pumped as any rookie.

“I just want to absorb all that I can until no one gives me an opportunity to or I just have no other option,” Cope said. “Then,” he added with a smile, “I’ll do something else.”

But, those who say it’s time for him to trade the driver’s seat for a rocking chair, Cope can pull out his membership in a pretty impressive club.

Back in 1990, he pulled off perhaps the greatest upset in NASCAR history, winning the sport’s biggest race when Dale Earnhardt shredded a tire on the final lap, allowing Cope to race by for a checkered flag that no one saw coming.

“It really is exciting to have a Daytona 500 attached to your name,” Cope said. “It is credibility, instant credibility, no matter what. It was a life-changing moment. It still is something that you can draw from. When things aren’t going as well or whatever, it’s something you can just reflect on and have some sense of gratification that, you know what, I’ve been to the top.”

Cope won another race that year at Dover, but those would be his only Cup triumphs.

In fact, he hasn’t won a race in any of NASCAR’s top three series since 1994.

Cope spent the past few years running his own team in the second-tier Xfinity Series, but he never had the funding to be a serious contender and was finally forced to shut things down.

Then he got a call from Premium Motorsports, offering him a chance to run at least a few races this season.

For Cope, it was a new lease on his racing life — a life he intends to hang on to as long as he can.

“I wasn’t really sure I’d ever get back,” he said. “But it feels really good and I can’t tell you how excited I am.”

With only 39 cars entering the 40-car field, Cope doesn’t have to worry about getting bumped.

His spot on the starting grid is assured.

With a skeleton crew — perhaps four or five members — Cope usually has his head under the hood when he’s not behind the wheel. Before heading to Atlanta, he was up until 2:30 in the morning getting the car ready to run.

But don’t call it work.

“It’s in my blood,” said Cope, a native of Washington state and son of a Top Fuel drag racer. “I loved what he did. And we did this together. We made our plan. We went forward with it. Ten years from when we started, we were winning Daytona. I just loved it so much, just loved driving the race car.”

When the green flag waves on Sunday, all eyes will be on the guys up front.

But don’t forget that car running toward the back.

The driver of the No. 55 Chevrolet is part of a very exclusive club.

And no one will be having more fun.

By Mike London mike.london@salisburypost.com Carson Cougars baseball 2016 record: 18-11, lost in second round of the 3A state playoffs to Marvin Ridge.... read more