ACC’s regular season ends with another chapter of Duke-UNC 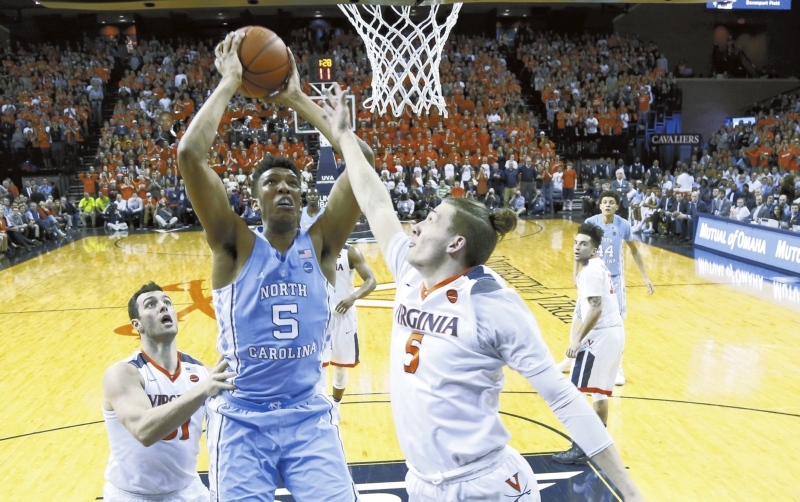 GAME OF THE WEEKEND: No. 17 Duke at No. 5 North Carolina. The Blue Devils (23-7, 11-6) already beat one nationally ranked opponent this week, taking down No. 15 Florida State, and now will look to sweep their fiercest rivals and try to earn one of the coveted top four seeds in the ACC Tournament and the two-round bye that accompanies it. The Tar Heels (25-6, 13-4) have already sewn up the No. 1 seed but desperately want to regain their offensive rhythm after No. 23 Virginia held them to 43 points — their fewest since 1979 — in a 10-point loss Monday night.

LOOKING AHEAD: The ACC takes its tournament to New York for the first time next week, and there’s still plenty to sort out over the weekend. Only three seeds — top-seeded UNC, 12th-seeded Clemson and 15th-seeded Boston College — have been decided. And it’s possible that six teams — No. 8 Louisville, No. 15 Florida State, Duke, Virginia Tech, No. 25 Miami and No. 23 Virginia — could finish in a third-place tie with 11-7 conference records.

PLAYER TO WATCH: John Gillon has been hitting big shots all season for Syracuse, and the transfer from Colorado State is trying to shoot the Orange (17-13, 9-8) into the NCAA Tournament. He banked in a 3-pointer to beat Duke last week, and previously hit another 3 with 1.8 seconds left to force overtime against North Carolina State, finishing with 43 points in that eventual 100-93 victory. Now it’s March, when buzzer-beaters are memorialized for eternity, and Syracuse hopes Gillon can conjure a few more.

INSIDE THE NUMBERS: In an era of the unbalanced, 18-game conference schedule, no two road schedules were the same in the ACC. Duke is 4-4 with one road game to play, and its nine league road games came against the other nine teams that joined the Blue Devils in the top 10 in the league standings. Meanwhile, UNC went 5-4 on the road against a schedule that included visits to the league’s bottom six teams and lost on the home floors of the only top-half teams it played (Duke and Virginia).

ON THE WOMEN’S SIDE: No. 3 Notre Dame and No. 8 Florida State look like the favorites in the league tournament that began Wednesday in Conway, South Carolina. The Fighting Irish (27-3) hold the top seed for the fourth time in four years in the league while the Seminoles (25-5) have the second seed. Looking further ahead, those two schools are joined by Duke and possibly North Carolina State as potential hosts for four-team subregionals in the NCAA Tournament. Those are awarded on merit to the top 16 teams and won’t be determined until Selection Monday, March 13.