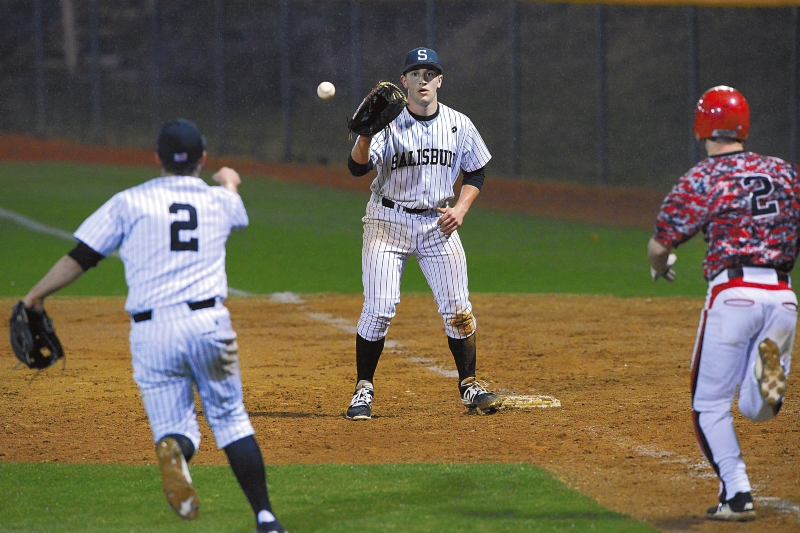 2016 record: 12-15, lost to Central Carolina Conference rival West Davidson in the first round of the 2A state playoffs.

Coach: Mike Herndon is in his second season at Salisbury. He  previously had great success at Southwest Guilford and Davie County and entered the 2017 season with a career record of 324-205. He had a school-record 211 wins in 14 seasons at Davie.

Strengths: Probably pitching. That sounds crazy because the Hornets had a shaky 7.04 ERA a year ago, but if everything comes together this could be a fine 2A staff.

Salisbury plays in a big park and won’t hit many homers, but the middle of the lineup bats should do some damage in the CCC.

Question marks: No one on the roster is listed as a shortstop, so that’s a concern. The Hornets graduated 5 regulars. There are some holes to fill, especially in the infield.

• Junior Griffin Myers is a two-way player who might develop into the sort of ace that his brother Riley was. Myers has matured, emotionally and physically, from last season when he went 3-1 on the mound and batted .286 with 13 RBIs. He had to play varsity before he was ready because the Hornets didn’t have much choice, but now he’s primed for a breakout year.

• Junior Chandler Lippard could be an all-county candidate at first base. He batted .312 with 11 RBIs last season. He looks bigger and faster and will hit in the middle of the lineup.

•Junior Joe Steinman is a versatile athlete and another two -way player. He had an ugly ERA last season, but he was 3-0 on the mound, and winning the game is what matters. He batted .298 with eight RBIs.

• Sophomore catcher Bo Rusher, a lefty slugger, has the most upside of all the Hornets. He’s got a swing that should make him a college prospect down the road. Rusher hit .292 with 24 RBIs as a varsity freshman.  He had 18 of those RBIs in a two-week stretch in late March and early April. He’ll be more consistent this year.

New faces:  While they played some in 2016, junior Will Taylor, sophomore Jack Fisher and seniors Hut Smith and Jake Murphy will have much larger roles this time. Football receivers Taylor and Murphy provide feistiness and speed. The 6-foot-7 Smith and Fisher, who was injured most of last season, could become productive two-way players.

Freshman Blaine Shellhorn is a good athlete and should help right away.

The field at Robertson Stadium,  greener and smoother than a year ago, also qualifies as a new face.

Quote: “Fortunately, we’ve hired a great pitching coach this year,” Herndon said. He was referring to his son, Carson, an All-State shortstop at Davie County High and fresh off a collegiate career as a standout hurler at Liberty University.

Schedule: Salisbury had a confidence-building 2-1 win against South Rowan behind Myers on opening night. Salisbury has one early league game against Thomasville, then won’t play another CCC game  until March 28. Salisbury again will be in the F&M Bank Classic in Kannapolis. That tournament falls very late in the season this year.