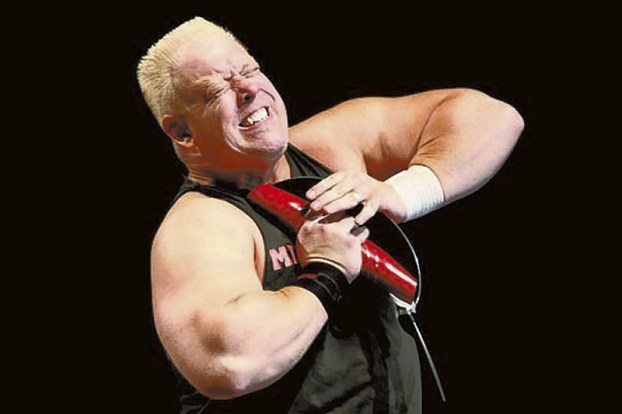 Carrier, a Guinness World Record holder for breaking 34 baseball bats in under a minute, will show off his skills during an hourlong presentation Sunday evening. The program is free to attend and open to the public.

Mega Force was begun in 2001, inspired by ESPN’s “World’s Strongest Man.” Carrier remembers observing the crowds these competitions would draw, and that fueled the Mega Force dream, he said.

“I thought, ‘Well, what’s a way that I can replicate that in a way that I can steer to giving back to the community?” he said. He began practicing the feats of strength featured on the program and discovered that performing them was an easy way to draw a crowd.

With a group of eight or nine strongmen, Carrier began to approach pastors and church leaders nationwide.

“Pastors love to link hands with us because we’re able to draw people that honestly don’t even care about church or go to church,” Carrier said. “They come into this environment, and it’s really entertaining. It’s fun. It’s nonreligious, and I’m able to share my testimony and what God’s done in my life.”

Over the years, Carrier has been featured on the television shows “America’s Got Talent,” “Ripley’s Believe It or Not,” “Walker Texas Ranger” and “Steve Harvey’s Big Show.”

His success has come despite being born with a physical disability.

Carrier said his faith has been a crucial factor in his success and he is thrilled for the opportunity to share his story and affect the lives of others.

Carrier said that attendance at his presentations is typically heavy, and he encourages those interested in attending to arrive early.

To learn more about Mega Force Evangelical Ministries or to book an event, visit its website, http://www.megaforceministries.com/.

Catawba professor to be honored at conclusion of local heritage study