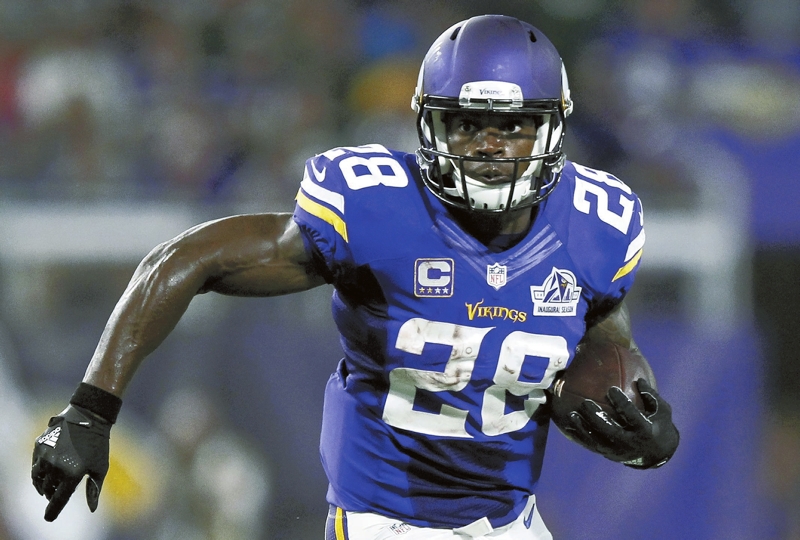 FILE - In this Sept. 18, 2016, file photo, Minnesota Vikings running back Adrian Peterson carries the ball during the first half of an NFL football game against the Green Bay Packers in Minneapolis. The Vikings on Tuesday, Feb. 28, 2017. have declined to exercise their option for next season on Peterson’s contract. This makes the franchise’s all-time leading rusher an unrestricted free agent when the market opens next week. (AP Photo/Andy Clayton-King, File)

Nine days before the free-for-all begins, Adrian Peterson was told his $18 million option would not be picked up by the Vikings, and Jamaal Charles was released by the Chiefs on Tuesday. Together, they have rushed for more than 19,000 yards and scored 165 touchdowns.

Yet, at ages 32 (Peterson) and 30 (Charles) when the 2017 season begins, they are at that career juncture when long-term deals for the position are rare.

Yes, Peterson has Hall of Fame credentials and Charles might have had them had he not been so injury prone, but neither is likely to get a lengthy contract.

Certainly there will be some interest, particularly in Peterson, who came back from a devastating knee injury to rush for 2,097 yards and win league MVP honors in 2012.

He could be the player who puts a contender over the top, though he comes off another injury-ravaged season in which he played in three games. And the Vikings haven’t closed the door on his return at a lower salary.

“Adrian is an important part of the Minnesota Vikings organization,” GM Rick Spielman said Tuesday. “We will continue to have conversations with his representatives and leave our future options open while determining what is best for both parties moving forward.”

Charles, sidelined for all but eight games the past two seasons, drew the highest praise from Chiefs owner Clark Hunt.

“Jamaal has been one of the most prolific players in our organization’s history,” Hunt said, “and I have an enormous amount of respect for what he has accomplished. He’ll always be a part of the Chiefs family and we’ll be ready to honor him for his outstanding playing career when the time is right.”

The time was right for the Redskins to keep Kirk Cousins, giving him an exclusive franchise tag. They have until July 15 to work out a lengthy contract, but meanwhile he will be due to make somewhere near $24 million in 2017 — a pretty hefty number for a player with no postseason victories.

Last season, Cousins broke his franchise record for passing yards, nearly eclipsing 5,000, and set another team mark with more than 400 completions, throwing for 25 TDs and 12 interceptions with a completion rate of 67 percent.

The Redskins lost four of their last six games to end up 8-7-1 and miss the playoffs.

Charles’ teammate, All-Pro safety Eric Berry, said he wouldn’t play for Kansas City if he was tagged for a second straight year. That was avoided when the Chiefs finalized a $78 million, six-year deal with Berry.

Berry was diagnosed with Hodgkin’s lymphoma three years ago, went through several rounds of brutal chemotherapy, then was deemed cancer-free the following summer. He’s been sensational since returning.

“Keeping Eric Berry in a Chiefs uniform long term has been a significant goal,” GM John Dorsey said. “He’s a special football player and an incredible person. We’re thrilled we were able to get this deal done.”

Pass rusher Jason Pierre-Paul has shown the Giants he’s recovered from a serious hand injury sustained in a fireworks accident in 2015. The team placed a non-exclusive franchise tag on the two-time Pro Bowl defensive end Tuesday.

It marked the second time in three years the Giants tagged Pierre-Paul. The other time was in 2015, but the 2010 first-round pick never signed his $14 million tender.

It was ultimately withdrawn by the team after the July accident that mangled his right hand, resulting in his index finger being amputated and other fingers being mushroomed at their tips.

Pierre-Paul missed the first half of the 2015 season and eventually returned after signing an incentive-laden $8 million contract. He struggled, had more surgery on his hand after the 2015 season and his play improved last season. He had seven sacks, 53 tackles, eight passes defensed, three forced fumbles, and a fumble recovery that he returned for a touchdown.

Also, Cleveland placed a second-round, free-agent tender on RB Isaiah Crowell and agreed to terms with punter Britton Colquitt on a four-year contract.

Late on Tuesday, the New York Jets have informed cornerback Darrelle Revis that they are releasing him, ending his second tenure with the team which was marked by a slip in play because of injuries and age.

Revis, 31, was scheduled to make $15 million, including a $2 million roster bonus, next season — but that would have been a lofty salary for an aging player who admittedly had a subpar year.

The move Tuesday, which was expected, makes Revis a free agent while also clearing about $9.3 million on the salary cap.

Revis is also facing aggravated assault and other charges alleging he was in a fight with two men on Feb. 12 in Pittsburgh, but his legal issues aren’t believed to have played a role in the Jets’ decision