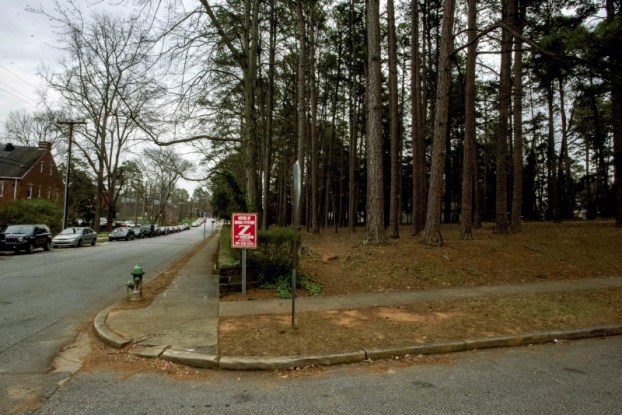 A zoning sign stands on the corner of Summit Ave and Brawley Avenue near Catawba College. Jon C. Lakey/Salisbury Post

SALISBURY — A Catawba College official said Tuesday that the broad neighborhood rezonings it has proposed for land next to the campus are aimed at giving the school some future flexibility on its own properties.

He emphasized the college is not proposing the rezonings as a “benign request” to build additional dormitories in the future.

Murphy’s comments came Tuesday during a courtesy hearing of the Salisbury Planning Board.

Catawba College has proposed rezoning considerable areas of property north and south of the campus from general residential to institutional campus. Catawba owns a large percentage of the properties for which the rezoning is requested, but not all of them.

In response, a neighborhood petition with roughly 75 signatures has been submitted to the city in opposition to the college’s request.

A full house packed the Planning Board’s meeting room Tuesday at 1 Water St., and most of the speakers called on Catawba not to intrude into their neighborhood any farther.

Gwen Matthews, also of Lantz Avenue, said the residents are concerned with the word “intent.” The college’s intent five years from now could be that the school wants all of the neighborhood’s properties, Matthews said.

Post and several other speakers suggested Catawba College look elsewhere to grow by establishing satellite campuses or other facilities in places such as downtown or in nearby Spencer.

Carolyn Brown of Lantz Avenue said her stable, solid neighborhood provides a lot of protection for the college and prevents deeper issues that might develop otherwise.

Mike Greene, a Brenner Avenue resident near the college, said further intrusion by the school will destroy the property values and cohesiveness of his neighborhood.

In 2005, when a smaller rezoning requested by the college was turned down, Greene said, Catawba officials were told they should have a plan. But it remains “ready, fire, aim,” on the college’s part, Greene said.

Douglas Isham of Yost Street and others also expressed concern that a Catawba College employee, Kenneth Clapp, had purchased as many as 12 residential properties and is “basically making them apartments” and renting them out to students.

Isham said, “That is Catawba College; that is your employee,” and he called it “a back-door way” to provide student housing. Meanwhile, students do not take care of the outside appearance of those rental houses, and it “has changed the character of the neighborhood,” Isham said.

“Catawba,” Isham said, “you need to look yourself in the mirror.”

Renee MacNutt of Lantz Avenue warned that if Clapp ever deeded his dozen properties to the college, it could ruin the neighborhood.

Murphy, the  school’s chief financial officer, emphasized that Catawba College itself rents to only four students in the neighborhood south of campus. Catawba has invested significantly in the properties it owns in the northern and southern neighborhoods, Murphy added.

After the Planning Board meeting, Murphy stressed that Catawba College had no operational or economic interest in properties owned by Clapp, who is an assistant professor in the religion and philosophy department and chaplain of the college.

“We neither sanction that nor encumber that as an employer,” Murphy said after the Planning Board meeting,

Murphy also emphasized it is Clapp’s property, not the college’s, that is rented to the lacrosse team and has been cited in past reports as causing neighborhood disturbances near Post’s house.

Some speakers described a general feeling of discontent that the college hadn’t communicated its rezoning proposal to them, except for notices some residents received within the past few days and the rezoning signs on the street.

“If you don’t know what’s going on, you get very, very anxious,” said Dianne Scott, who lives off Hidden Hill Lane north of the President’s House.

Murphy said the college is not trying to be aggressive or hostile, and city senior planner Preston Mitchell said it was suggested to Catawba to use the Planning Board’s courtesy hearing as a starting point for discussion.

Mitchell said the planning staff recommended the Planning Board send the rezoning case to one of its smaller committees for more study, and the 12-person board wasted little time Tuesday in doing that.

Those committee meetings are open to the public. Canup advised the neighborhood to send representatives.

“We have every reason to listen to everybody,” Burgin said. “We want you there.”

A full Planning Board recommendation eventually will be sent to the Salisbury City Council.

On the south side of campus, Catawba College has asked for a rezoning from general residential to institutional campus of four parcels off the 500 block of Summit Avenue (and also bounded by Lantz Avenue and Yost Street) and a full city block of six parcels bounded by the 200 block of Summit, Brenner Avenue, Lantz and Brawley.

On the north side of campus, Catawba wants to rezone parcels along North Park Drive and Duke Circle.

A second part of Catawba’s rezoning requests has not sparked much opposition or discussion. The school wants to rezone several of its properties in the flood-prone areas of Grants Creek from general residential and institutional campus to open space preserve.

Before Tuesday’s meeting, at the owners’ request, Catawba agreed to drop three properties off Hidden Hill Lane from its rezoning proposal.