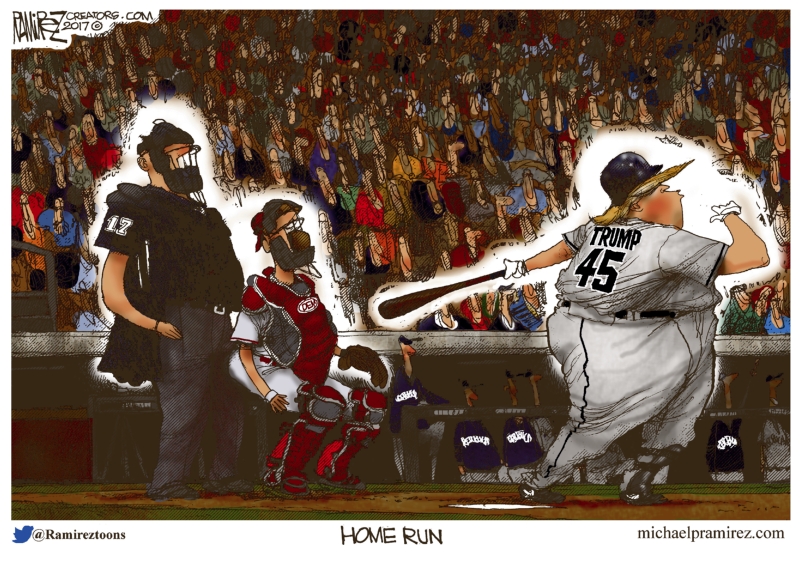 For Republicans who have been concerned that President Trump has not been specific about his policies and about where he wants to take the country, Tuesday night’s address to Congress and the nation was a welcome relief. For liberals, however, it was a problem precisely because he offered specifics.

Before the speech, Senate Minority Leader Chuck Schumer (D-NY) repeated the overused claim that Trump wants tax cuts for wealthy Americans at the expense of the middle class. Is that the best he and his aging fellow Democrats can do?

While the Democrats remain frozen in a time warp of their own making, Trump’s speech was focused on solutions and full of optimism for a change. Finally gone were the dark utterances of the campaign about the sad shape of the country. This time the country heard positive solutions, even when Trump mentioned nagging problems, such as violent crime in our cities. To address that issue, he has named a Department of Homeland Security task force.

The president responded to criticism that he had not said much about recent attacks on Jewish cemeteries, saying “we are a country that stands united in condemning hate and evil in all of its very ugly forms.” He even referenced Black History Month, reminding his audience that while civil rights progress has been made “much remains to be done.” Democrats joined Republicans in applauding.

Throughout the speech Trump asked for unity and for the parties to work together in the country’s interest, not their partisan interests. Good luck.

He touched on familiar themes — removing immigrants with criminal backgrounds and not allowing what he called “a beachhead of terrorism” to form inside America, taking “strong measures to protect our nation from radical Islamic terrorism” and immigrant vetting. “It is not compassionate,” he said, “but reckless to allow uncontrolled entry from places where proper vetting cannot occur.”

He pitched school choice as a civil rights issue and introduced Denisha Merriweather, an African-American woman in the gallery, who Trump said failed third grade twice before being given a tax voucher to attend a better school. She became the first in her family not only to graduate from high school, but from college. She will earn a master’s degree in social work later this year.

Donald Trump reinvented himself with this speech. Instead of the harsh and condemning personae he projected during the campaign and his first 100 days, the president displayed kindness, compassion and a love for America. Americans want their president to love the country and Trump gave them that.

At the end he said, “The time for small thinking is over,” and he called for “trivial fights” to be left behind. Glimpses on the faces of congressional Democrats does not offer much hope this will happen.

In an interview before the speech, presidential historian Jon Meacham told Fox News Channel’s Bill O’Reilly: “Great presidents don’t govern from their base, but from their base plus.” President Trump may have added some plus to his base with that speech.

Most Americans prefer optimism to pessimism and vision to uncertainty. Donald Trump promised to pivot from campaigner to president after he was inaugurated. It took him a little more than one month, but Tuesday night he made that pivot and it was pleasing to watch and soothing to the ear.