College Basketball: Senior Warren has been steady for Indians 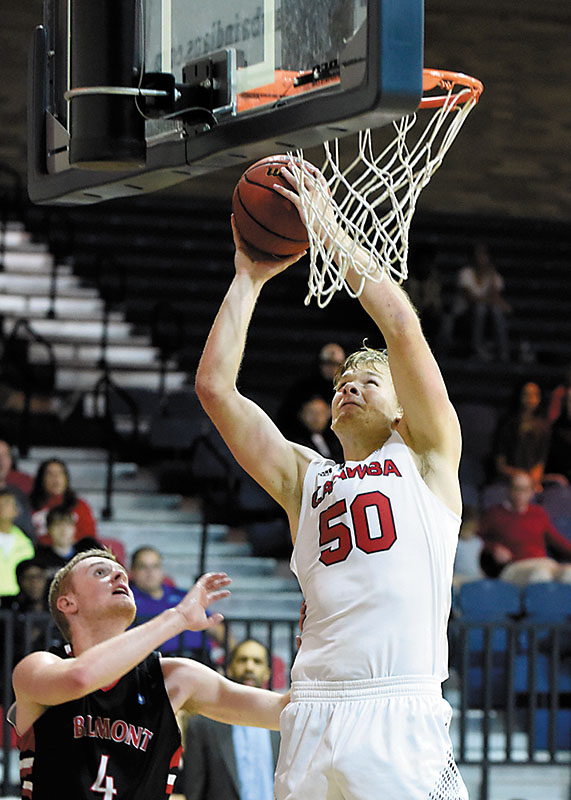 SALISBURY — Catawba College senior Troy Warren finished the regular season as the South Atlantic Conference’s third most accurate shooter, with his 64.4 percent trailing only a couple of pro prospects from Lincoln Memorial University.

The 6-foot-9, 225-pound Warren has raised the bar a bit more in recent games, shooting 75.9 percent in Catawba’s last four outings. Included in that stretch was 12-for-15 shooting in a career-high, 34-point outburst at Brevard.

“Guys were getting the ball to me,” said Warren with a shrug. “And Brevard isn’t getting the athletes it used to, when it had guys like (Carson grad) Darius Moose. They’re making a transition to Division III.”

Warren had an advantage in inches and pounds on Brevard defenders, but those 34 points showed how far he’s come in operating against a zone defense. He’s learned to catch the ball deeper than in the past, and he rarely dribbles. He makes a quick move and shoots. If defenders adjust to his primary move, he’s developed an effective counter. He’s keeping it simple, not over-thinking. And he’s aggressive. He doesn’t mind dunking when the opportunity presents itself.

“Like a good nose guard in football, Troy is commanding more double teams now, opening things up for our guys to drive,” Catawba coach Rob Perron said. “And he’s getting more offensive rebounds now. He used to just rebound his own misses. Now he’s rebounding in a wider area.”

Perron sat Warren down after the Brevard game and asked him if he had aspirations to play pro ball overseas, where the demand for height always exceeds supply. But Warren, an excellent student in accounting and economics, doesn’t see himself playing past this season.

“Any pro opportunity I might get wouldn’t be in the United States, and I’m not interested in going far away,” Warren said. “I’ve made a lot of friends and connections at Catawba, and I hope to get into the business world here.”

Warren actually was cut following middle school tryouts in the eighth grade. But the summer before he entered Lake Norman as a freshman he hit a growth spurt.

“I grew six, seven, maybe eight inches,” Warren said. “Suddenly I had a lot of height, but my skills hadn’t caught up with my body yet. It took time to develop.”

Lake Norman won the 4A state championship in 2010 when Warren was a ninth-grader.

Coach Brandon Jolly and the Wildcats had talent. The school had a ninth-grade team as well as a jayvee team, and Warren paid his first dues on that ninth-grade squad. He would be named Lake Norman’s most improved player three times, which is both good news and bad news. It meant there was a lot of improving to do.

Warren’s coming-out party occurred early in his junior season. He was still coming off the bench then, but with West Rowan visiting Lake Norman, Warren shot 9-for-12, dunked on the Falcons three times, and blocked several shots.

“It was a huge upset, very exciting,” Warren said.

Lake Norman was playing in a league with stiff Charlotte area competition during Warren’s high school days. Mooresville was the most heated rival, but Warren also competed against Hough’s Luke Maye and West Charlotte’s Kennedy Meeks. Those two are UNC teammates now.

“Meeks was huge in high school, not fat, but really big,” Warren said. “Watching him on TV now, he doesn’t even look like the same guy. He’s lost a lot of weight. He’s a lot more mobile. As far as Maye, he was young when I played against him, but I knew he was going to be a UNC type of player.”

Warren is a mobile, springy guy for a traditional post player, a true 5-man, and there was some interest from Division I schools. At one point, recruiting guru Bob Gibbons listed Warren as one of the state’s top 10 seniors.

Furman, Stetson, Western Carolina and Presbyterian recruited Warren, along with a host of D-II schools. He was pursued by Catawba’s SAC rivals Lincoln Memorial, Wingate and Lenoir-Rhyne.

“With the Division I schools, recruiting can be pretty cutthroat,” Warren said. “They want a commitment right that minute or they immediately move on to the next guy. I waited too long.”

He has no regrets. Catawba proved to be a viable option. Davis Emerson, a former Lake Norman teammate, was playing hoops at Catawba, and one of Warren’s Lake Norman buddies was on the Catawba soccer team.

“That made the decision pretty easy,” Warren said.

Warren played for former Catawba coach Jim Baker as a freshman and registered one of the more remarkable games of his career in just his second outing. In a 90-86 loss to Pfeiffer at Goodman Gym, Warren shot 12-for-14, scored 26 points, pulled down 15 rebounds, and blocked seven shots — two shy of the school record.

But there were more downs than ups that freshman season. Lots of growing pains.

Perron was hired prior to Warren’s sophomore season.

“The biggest change in Troy has been stamina,” Perron said. “As a sophomore, he could play about three minutes with the intensity we want our guys to play with. Now there are nights when he’ll go eight or 10 minutes in a row without a break.”

There have been a few stellar nights (25 points and 18 rebounds against Queens as a sophomore), but mostly it’s been a career of quiet, steady, high-percentage production. As a senior, Warren has played through an elbow issue and has contributed 8.3 points and 5.7 rebounds to an 18-10 team.

Teams have to account for Catawba’s No. 50 when they formulate a gameplan, and he helps stars such as Jameel Taylor and Jerrin Morrison get open lanes to attack the rim.

“Troy has been under-appreciated over the years, but not by his teammates,” Perron said. “He’s such an humble guy that when he’s successful all the guys really enjoy it. They all want success for him.”

Sixth-seeded Catawba plays at third-seeded Wingate in the first round of the SAC tournament on Wednesday at 8 p.m. Warren had 12 points and nine rebounds when the Indians pounded Wingate last week.

It will be much tougher playing at Wingate, but Warren is optimistic.

“I think we got a pretty good draw,” he said. “We match up with Wingate well, and it’s a short trip.”