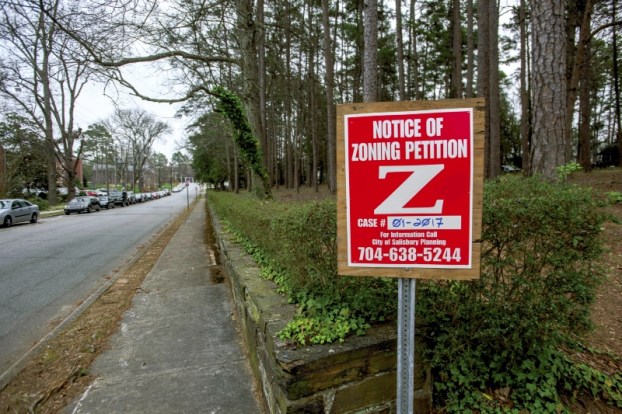 Catawba College faces off against neighbors in zoning case

SALISBURY — Catawba College has drawn the ire of its neighbors with a proposal to rezone several tracts of land near the campus.

The Salisbury Planning Board today will consider a request from the college to make zoning changes to swaths of property around the campus. In neighborhoods south and north of campus, Catawba wants to change clusters of residential property to an institutional campus zoning. The college also wants to change property in flood-prone areas near Grants Creek to an open space preserve zoning.

The institutional campus zoning is intended for academic and religious campuses or government and health care facilities, according to Salisbury’s Land Development Ordinance.

Asked about the request, Catawba College officials did not say whether they have immediate plans for the land. Neighbors are wary that campus expansion would follow the rezoning and have rallied opposition to the proposal.

Sam Post, who lives immediately south of Catawba, said people who live near the campus are concerned mostly about property values and how the rezoning might change the character of the neighborhood.

“The bottom line for us is property values and livability,” Post said. “We want it to stay a neighborhood. … It’s a safe, nice, middle-class neighborhood. That’s the kind of things Salisbury needs more of.”

For years, Catawba College has owned houses in the neighborhood south of campus. Regularly leased to college students, the houses have been a nuisance, Post said. He lives across from a house leased to members of the college’s lacrosse team.

“If you walk on campus, it’s quiet, but if you sit in my house, it’s party central,” he said. “This used to be a family neighborhood, but they’ve changed the character of the neighborhood.”

“Nobody is going to want to buy a house for a family that’s right between a dorm and a classroom,” he said.

The only buyer would be Catawba College, and the college would set the price, he said.

Despite concerns from neighbors, the college has not announced specific plans to expand its campus. But Catawba plans to roughly double its student enrollment by 2025.

At 4 p.m. today, the Salisbury Planning Board will meet to consider Catawba’s request. The meeting will be at 1 Water St. instead of Salisbury City Hall — the usual location.

Planning and Development Manager Preston Mitchell said Catawba’s request is a first step. Nothing is “set in stone,” he said.

Neighbors have helped defeat similar zoning requests from Catawba College. Today’s rezoning would be larger than any previous one, Post said.

In 2005, for example, Catawba wanted to rezone a 2.5-acre area. At that time, nearby residents said that would “open up a gateway” for future changes on college-owned parcels.

“I love Catawba,” Post said. “I’ve lived next to it for my whole life. None of this is personal about Catawba.”

By Josh Bergeron josh.bergeron@salisburypost.com SALISBURY — For the second time in as many years, the City Council is considering whether to... read more