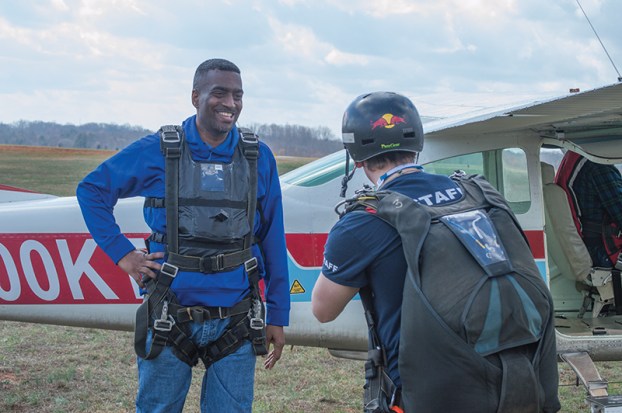 Josh Bergeron / Salisbury Post – Isenberg Elementary School teacher Anthony Johnson skydived on Saturday at the Rowan County Airport. Johnson said he plans to use speed data as part of a lesson plan about force in motion. Josh Bergeron / Salisbury Post – Isenberg Elementary School teacher Anthony Johnson stands up after skydiving on Saturday. Johnson says he collected data during the skydive that he plans to use in lesson plans this week.

SALISBURY — Isenberg Elementary School teacher Anthony Johnson couldn’t contain his excitement on Saturday after coming to a landing at the Rowan County Airport.

“Oh, I’ll be back. I’ll definitely be back,” Johnson said, smiling as he walked away from a grassy landing area. “There’s nothing in this world, man — you’ve got to try this.”

Just minutes earlier, Johnson tried and failed to hide his angst as he contemplated what was about to come. He was going skydiving near the edge of the Rowan County Airport — at Piedmont Skydiving. It was his first time skydiving, and he talked about whether the wind or the clouds in the sky might affect whether he was able to skydive. Johnson also didn’t eat breakfast on Saturday but managed to stomach a bag of chips on his way to the airport.

Johnson admitted he hoped a rain storm might cancel his skydiving plans.

“Ten thousand feet. Oh, my gosh,” he said, laughing nervously before his skydive at noon.

Curiosity was a reason for Saturday’s plans. Johnson lives nearby and regularly sees skydivers parachuting to the ground. Until recently, however, he was over a weight limit used by Piedmont Skydiving — 230 pounds. Since July, he’s shed 77 pounds. Now, he’s under the weight limit.

Johnson will also be teaching a lesson about force in motion this week. To help add to the classroom lesson, Johnson wore a special sensor that collected data about his four-minute skydive.

Two of his students at Isenberg, Christopher Le and Carlos Pacheco, even traveled to the airport to watch the entire event unfold.

The students were visibly more excited about the affair than Johnson. Le said he understood Johnson being nervous. Pacheco said he wouldn’t want to go skydiving, but was excited to watch Johnson do it.

When the time came for his jump, Johnson strapped on a harness and sensor to collect data about his fall. He walked to the drop zone, posed for a few pictures with students and hopped into an airplane. He gave a thumbs up as the plane cranked to a start and cruised to the runway.

Bystanders watched as Johnson’s plane climbed above the mostly cloudy sky with Johnson and a Piedmont Skydiving staff member in tow. Johnson wouldn’t reappear with the second member of the tandem until they were just below the clouds.

With Saturday’s fun over, Johnson said he plans to give the data recorded to his students. Then, students will graph the data as part of this week’s lesson on force in motion. He plans to use video recorded during the skydive as part of the lesson. He said students from Isenberg Elementary will also take a field trip to the Rowan County Airport this week.

By Josh Bergeron josh.bergeron@salisburypost.com SALISBURY  — An Amtrak trip to Salisbury will come with a free bus ticket starting in March.... read more