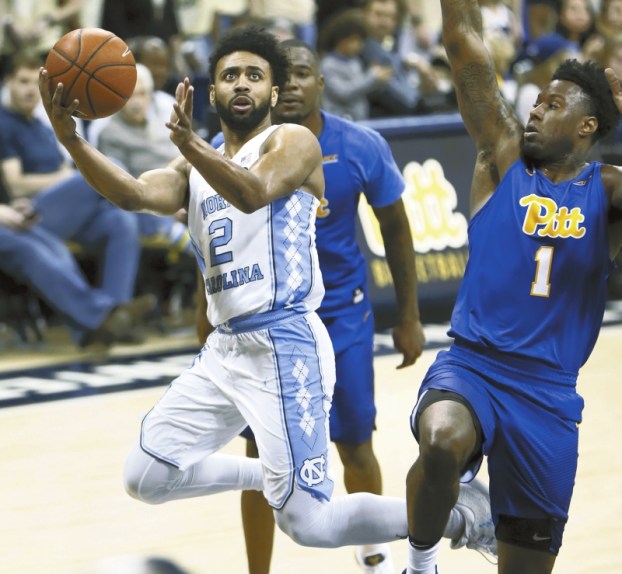 North Carolina's Joel Berry II (2) shoots after getting around Pittsburgh's Jamel Artis (1) during the second half of an NCAA college basketball game, Saturday, Feb. 25, 2017, in Pittsburgh. (AP Photo/Keith Srakocic)

PITTSBURGH (AP) — There’s a mantra North Carolina coach Roy Williams trots out on occasion when he wants to grab the attention of his talented if occasionally erratic team. It’s one forward Justin Jackson knows by heart.

The message finally seems to be resonating with the streaking Tar Heels, who clinched at least a share of the Atlantic Coast Conference regular season title with an 85-67 victory over Pittsburgh on Saturday.

While Jackson scored points – including two deep, contested 3-pointers that bookended a 10-0 run to end the first half that put North Carolina in complete control – the Tar Heels sent a bigger message at the other end of the court.

Three weeks after surviving a serious scare by Pitt in Chapel Hill, North Carolina held the Panthers to 40 percent shooting and didn’t let them within single digits over the final 16 minutes.

“We can score pretty well and so sometimes we just might not take, put as much energy (on defense),” Jackson said. “We’re starting to key in on what we’re supposed to do and if we can see that (effort) defensively I think we’ll be all right.”

The Tar Heels (25-5, 13-3) have won four straight following a loss to arch rival Duke two weeks ago and can wrap up their second straight ACC regular season crown and 31st overall with a win at No. 18 Virginia on Monday. North Carolina also secured the No. 1 seed in the ACC tournament when the Blue Devils lost to Miami.

Jackson hardly did it alone. Joel Berry scored 19 points for North Carolina and Kennedy Meeks added 18 points and 10 rebounds as the Tar Heels overwhelmed undersized Pitt (15-14, 4-12) in the paint. North Carolina outrebounded the Panthers 48-28, including a season-high 24 offensive boards, and finished with 28 second-chance points.

“It’s difficult when they’re reaching over your back and getting the balls,” Pitt senior guard Chris Jones said.

Jones finished with 10 points in his final game at the Petersen Events Center. Fellow seniors Michael Young and Jamel Artis led the Panthers with 17 points each but Pitt couldn’t match North Carolina’s depth or talent. There were times Pitt was in position to grab a rebound only to have a Tar Heel reach over them and tap it to a teammate.

“They’re literally longer than us in every position except the point guard spot,” Pitt coach Kevin Stallings said. “They do it to everyone.”

The Panthers took the Tar Heels to the final buzzer in Chapel Hill last month, losing only after Artis’ off balance heave fell short. Pitt’s four outgoing seniors – Young, Artis, Jones and Sheldon Jeter – came in looking for one last vintage performance in front of the Oakland Zoo to take some of the sting off a disappointing season.

No chance. North Carolina has tightened up defensively since the Blue Devils lit them up on Feb. 9 and responded every time the Panthers attempted to make a push.

North Carolina: On a team littered with scorers, Jackson is becoming the “go to” guy.  He’s put up at least 20 points in eight of his last 10 games. “He hits shots when we really need them,” Meeks said.

Pitt: Barring an improbable run in the ACC Tournament, the Panthers will miss the NCAAs. At this point, any kind of postseason berth is in jeopardy.

BACK IN THE GROOVE

North Carolina senior forward Isaiah Hicks went scoreless in a victory over Louisville on Wednesday then went 0 for 3 in the first half against the Panthers, leaving him wondering what was going on. Yet he found other ways to contribute, grabbing five rebounds and handing out four assists before finally making a layup with just over 17 minutes to go in the game.

“Kennedy was like, ‘There you go, finally,’” said Hicks, who finished with eight points, six boards and six assists.

It’s been a season of change for the Panthers and Stallings, who replaced Jamie Dixon last spring. A familiar face was on hand to watch the four seniors play one last time in front of the Oakland Zoo: Brandin Knight. Knight, a former Pitt star who worked as an assistant under Dixon before eventually taking a job at Rutgers, made a surprise appearance during pregame ceremonies.

“It meant a lot seeing Brandin Knight here tonight,” Artis said. “He’s got his banner on the wall. You’ve got to respect that. It means a lot.”

North Carolina: Will try to sweep the season series from Virginia. The Tar Heels dominated the Cavaliers 65-41 in Chapel Hill earlier this month.

Pitt: Wraps up the regular season with a two-game trip starting Tuesday at Georgia Tech.

By Mike London mike.london@salisburypost.com SALISBURY — Muscular Lincoln Memorial strolled into Goodman Gym looking as much like a football team as a... read more