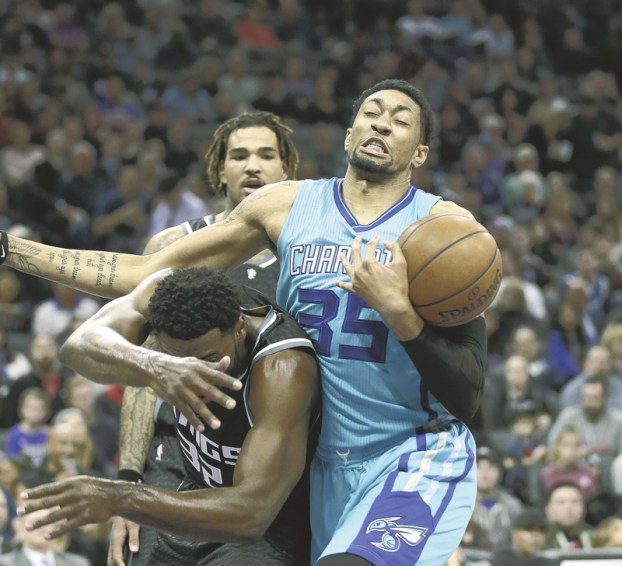 SACRAMENTO, Calif. (AP) — Frank Kaminsky had 23 points and 13 rebounds and the Charlotte Hornets beat the Sacramento Kings 99-85 on Saturday to end a five-game losing streak.

The Hornets went ahead late in the first quarter and led the rest of the way for their second win in 14 games. The Kings never got going offensively, and Charlotte led by 23 points in the second half while ending their 12-game road skid.

Marvin Williams scored 16 points and Nicolas Batum had 15 for the Hornets.

Ben McLemore led the Kings with 18 points and Buddy Hield had 15 in his second game since being acquired from New Orleans in a trade for DeMarcus Cousins. Anthony Tolliver and Tyreke Evans had 11 points each.

Sacramento had won five of its previous six games and now trails eighth-place Denver by 1 ½ games.

It’s been a rough past seven weeks for Charlotte, which had a 19-14 record on Dec. 29 after beating Miami. The Hornets went into a tailspin, losing 19 of 24 before defeating the Kings.

Kaminsky has been a bright spot of late, averaging 19 points the previous five games and starting in place of injured Cody Zeller. Frequently left alone on the perimeter, Kaminsky made five 3-pointers and hit 9 of 18 shots overall.

The Kings were seeking their first five-game winning streak at home since 2007. Sacramento shot 39 percent and was outscored 28-18 in the third quarter when Charlotte built a 79-58 lead.

After a 16-point victory over Denver in their first game without Cousins, the Kings looked listless against the Hornets. Sacramento missed its first six shots of the second half and Charlotte ran off 12 straight points to assume a 63-40 lead.

Willie Cauley-Stein had a career-high 29 points against Denver but went scoreless against Charlotte in the opening half and finished with two points in 28 minutes.

Hornets: Charlotte scored the first 12 points of the game, only to have the Kings counter with a 15-point run. … The seven-game road trip, their longest of the season, ends March 4 in Denver. … Marco Belinelli had 13 points and Kemba Walker had 12.

Kings: Evans, who played four seasons in Sacramento, got his first start as a King since April of 2013. He was traded to New Orleans in the offseason. … The bench had a season-high 72 points against Denver, but had 29 against the Hornets.

Kings: Minnesota comes to town Monday looking to gain ground on the Kings in the playoff hunt.