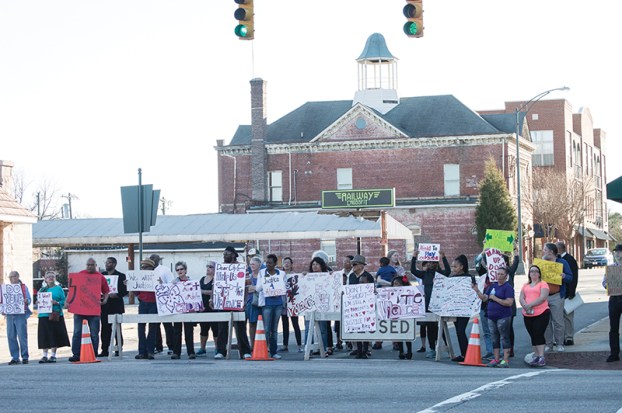 Josh Bergeron / Salisbury Post - Participants in a Community Speaks March on Saturday stand and chant at the intersection of Innes Street and Lee Street. The march started at a graffitti wall near downtown and moved through parts of downtown.

In downtown Salisbury march, crowd calls for end to violence Josh Bergeron / Salisbury Post – A participant in Saturday’s Community Speaks March holds up a sign as marchers stand at the intersection of Lee Street and Innes Street in downtown Salisbury. Josh Bergeron / Salisbury Post – Londyn Addison and Janiah Finger, at left, smile as they march in a Community Speaks march on Saturday. The march advocated for an end to local giolence.

Heggins and dozens of others marched through the streets of downtown Salisbury while chanting and holding signs that said: “stop the violence,” “afraid to play outside,” “justice for A’yanna Allen” and “together we win.”

One of the speakers was Heggins, who owns the consulting firm Human Praxis Institute. She told the crowd of roughly 40 marchers that an end to Salisbury’s recent wave of violent crime “has got to come from the ground up.”

“It’s got to stop and it starts with us,” Heggins said.

Elected officials like to ask “where’s the plan,” she said.

“Well, now’s the time to take the plan to them,” she said.

Local minister Latasha Wilks, who organized Saturday’s march, invited members of the Salisbury City Council to participate in the event. None showed up on Saturday — roughly one week after the city’s most recent murder. The march also came more than two months after the murder of 7-year-old A’yanna Allen, who was killed after suffering 20 gunshot wounds while sleeping at her grandmother’s house.

A Salisbury native, Wilks said Saturday’s march is the start of a coalition-building effort. A coalition between residents and city officials is especially important in the midst of Salisbury’s current gun violence epidemic, she said.

“I have never seen the streets like they are now, until now,” she said. “You would think that somewhere like downtown would have never been touched, but that’s not the case. … I know when they’re zooming in on downtown and the police department it’s time for us to step up.”

Wilks was referring to a shooting on Jan. 22. In that incident, three people were injured when an argument started in a hookah lounge and ended with shooting in a parking lot located less than a block from the Salisbury Police Department.

“Guns down, stop the violence” was one of the many chants shouted into the streets by Saturday’s marchers.

Guns are just one part of the solution to Salisbury’s recent crime problems, said march participants. One speaker said drugs and guns are easier to obtain that a college degree and a job. Economically depressed areas are a breeding ground for violences, and Salisbury’s elected leaders need to successfully recruit jobs that don’t require advanced college degrees, said another speaker.

Local Pastor Anthony Smith encouraged marchers to work together and collaborate. Saturday’s march was just the beginning, he said.

“We know this is not the end, not the goal. This is one tactic to achieve a larger strategy,” Smith said.

By Rebecca Rider rebecca.rider@gmail.com SALISBURY — Two hot-button topics are up for discussion at Monday night’s Rowan-Salisbury Board of Education... read more