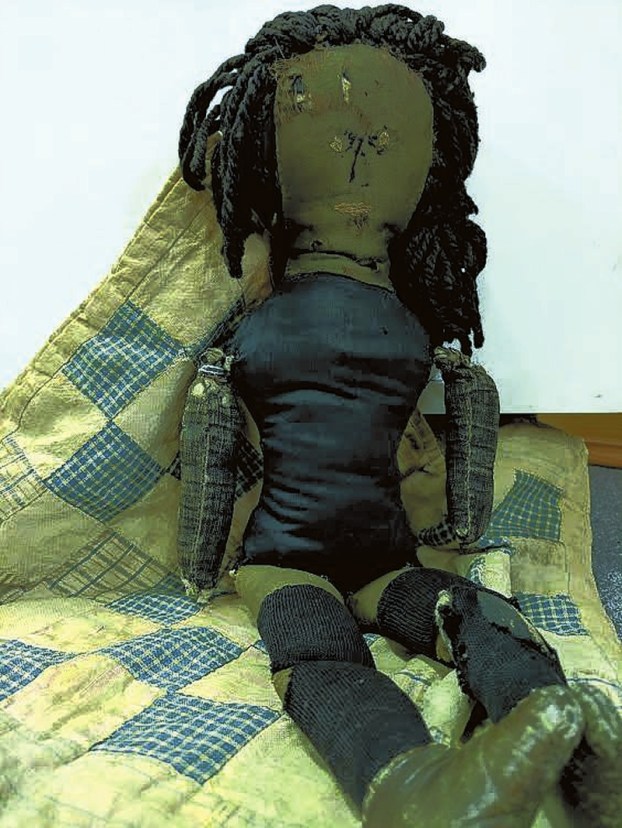 Submitted photo Carl and Mary Jane Brummer donated this pre-Civil War doll, probably made by a slave, to the Spencer Doll and Toy Museum.

By Kathy Gregg
For the Salisbury Post
Mary Jane and Carl Brummer were attending a convention in North Carolina and decided to visit the Doll and Toy Museum in Spencer.
They donated an important doll to the museum this month to honor Black History Month and wanted to check in to see how it was displayed and to perhaps shed a bit more light on its history.
According to Mary Jane, the doll was given to her in the 1960s when the Brummers lived in Philadelphia. At that time, Mary Jane was a nurse and one of her fellow nurses owned an old fabric doll that had belonged to his mother.
If Mary Jane did not want it, the nursing friend said, the doll was going into the trash. The only promise that was part of the deal was that Mary Jane would have to take care of the doll forever.
How could Mary Jane, a collector of dolls, turn down such an offer even if the doll were dirty and ripped and not very attractive at the time?  It went home with Mary Jane, got cleaned up a little and lived with her until early 2016 when the promise to take care of the doll led to its donation to the museum.
After some research into the history of the doll, this is what Mary Jane learned:
The doll was created in the Baltimore area before the Civil War and probably by a female slave for her child, based on the dark fabric skin of the doll. The cleaning unearthed a beautiful set of leather boots sewn to the stockinged feet, and they may have been made by the slave father who was a leather worker.

The doll is stuffed with raw cotton, making it soft to hold.

Her face is silk embroidered, and one can only imagine that a few strands of thread were gathered by the slave from the owner’s house to compete the face. The stitches in both the face and the doll body show a high degree of accomplishment, as though the creator did a lot of sewing in the past.

The dark hair is created with carpet yarn, and although there were no clothes with the doll, the body is fashioned so that it might only need a dress. Instead it has a scrap of an old quilt with matching colors.
The quilt may not be as old as the doll, but the two are now bound together on display at the museum.
We will never know the complete story of this doll or who the creator was or who the child was that first received this doll more than 150 years ago. We only know that it has a place of honor both at the Spencer Doll and Toy Museum and in history thanks to the doll preservation by the Brummers.
The Spencer Doll and Toy Museum is open 10 a.m.-5 p.m. Thursday–Saturday. For more information, go to the website at www.spencerdollandtoymuseum.com.
You Might Like

SPENCER — It didn’t go exactly without a hitch, but the Rowan County 40 & 8 train is back where members... read more