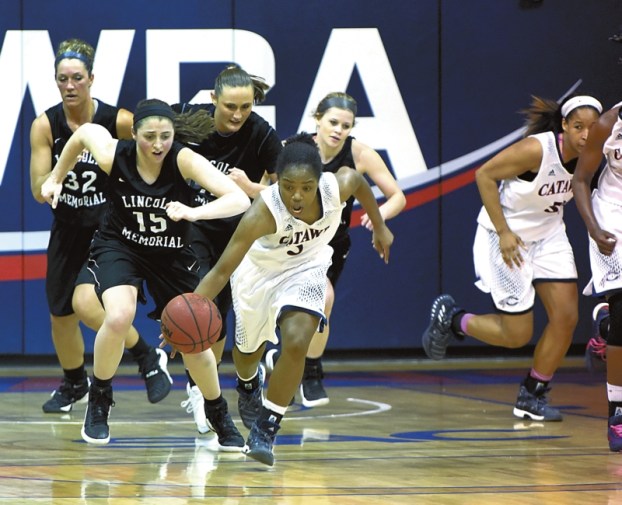 Once Saturday’s game started at Goodman Gym, Johnson virtually had to stand alone, as post player Terri Rogers had her afternoon ruined by foul trouble.

At full strength, Catawba (15-12, 12-10) may have been able to compete with Lincoln Memorial, but with Rogers playing just 14 foul-plagued minutes, the Indians had no chance. They fell, 89-67, to the South Atlantic Conference regular season champions.

“Some people we had to have on the floor weren’t on the floor,” Catawba coach Angie Morton said quietly. “We wanted today to go a lot better for Bri, but Lincoln Memorial did a very good job. They’re a lot deeper than we are.”

Lincoln Memorial (24-3, 19-3) had a 34-14 advantage in bench points, and 6-foot-2 Josey Harding pulled down 19 rebounds as the Railsplitters slaughtered Catawba on the glass, 59-30. Megan Pittman had 21 points and 12 boards. Lincoln Memorial’s defense held Catawba to an ugly 31-percent shooting day.

Catawba started fine, but Rogers had her second personal foul three minutes into the game and had to sit down. Rogers is quicker than Lincoln Memorial’s post players, and she temporarily had a field day in the lane when she returned to the floor. Catawba trailed, 23-22, after a quarter.

Catawba was down, 37-32, with 4:04 left in the first half, still fighting hard, when Rogers got her third foul. Lincoln Memorial quickly pushed ahead by double digits, although four free throws and a jumper by Johnson late in the half kept the Indians in the game. They trailed 49-40 at the break.

“It was tough without Terri, but when things get tough, that’s when you have to stay up,” Johnson said.

Rogers picked up her fourth foul 90 seconds into the second half, and Lincoln Memorial was able to maintain a double-digit lead throughout the third quarter.

Rogers fouled out with 5:36 remaining, about a minute after Catawba point guard Serena Brown, who got four of her five fouls in the second half, exited.

Lincoln Memorial’s lead would reach 25 points before it was over.

Johnson scored 20 for the Indians and came out of the game to to an ovation with a minute left on the scoreboard.

“Bri made her mark here, put her name in the record books,” Morton said. “She scored a lot of points, and she will be hard to replace.”

Catawba shot so poorly — a dismal 3-for-23 on 3-pointers — that it couldn’t take advantage of 23 Lincoln Memorial turnovers.

“We didn’t play our best today, but it happens,” Johnson said. “No regrets.”

NOTES: Anderson’s win against Wingate on Saturday helped Lincoln Memorial an outright championship. Anderson and Wingate tied for second, one game back. … Catawba will be seeded seventh for the SAC tournament and will play at Anderson in the first round on March 1.