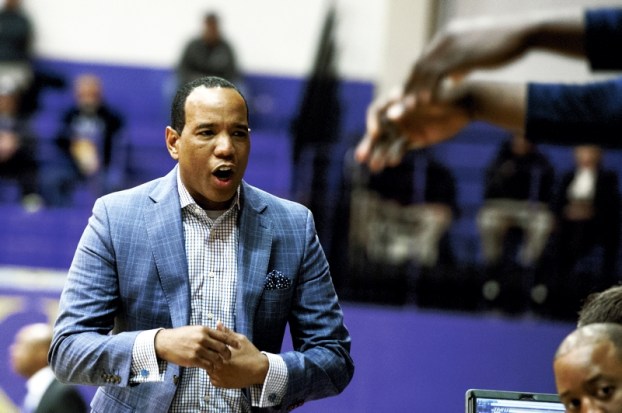 FILE - In this Jan. 26, 2017, file photo, UNC Wilmington coach Kevin Keatts reacts to a play during the team's NCAA college basketball game against James Madison in Harrisonburg, Va. Keatts is focused on helping UNC Wilmington earn another shot in the NCAA Tournament _ not on any other jobs. The Seahawks’ third-year coach says it is “flattering” to hear his name mentioned for higher-profile openings but says he’s mentally “locked in” to leading UNCW to another Colonial Athletic Association Tournament title, getting back into the field of 68 and pulling some upsets.(Nikki Fox/Daily News-Record via AP, File)

Kevin Keatts is focused on helping UNC Wilmington earn another shot in the NCAA Tournament — not on any other jobs.

The Seahawks’ third-year coach says it is “flattering” to hear his name mentioned for higher-profile openings but says he’s mentally “locked in” to leading UNCW to another Colonial Athletic Association Tournament title, getting back into the field of 68 and pulling some upsets.

Winning two straight CAA coach of the year awards, and being in position for a third, has made Keatts a hot commodity — especially with an opening a few hours up the road at North Carolina State, which fired Mark Gottfried last week.

“Obviously, with having success, your name’s going to be mentioned a lot of places, and that’s flattering,” Keatts said. “In our third year, we’ve had more success than most, but for me, I’ve been locked in to these guys and really enjoying my team. I love what Wilmington has to offer.”

And not just because there’s a beach nearby.

UNC Wilmington (25-5, 14-3) has already wrapped up the No. 1 seed in the CAA Tournament that begins next week in Charleston, South Carolina, and can break the school record for victories in a season with a win over Northeastern on Saturday in the regular season finale.

Keatts knows UNC Wilmington probably has to win the tournament to earn a second straight NCAA bid. The Seahawks claimed the league’s automatic berth last year — their first since 2006 — but lost to Duke in the first round of the West Regional as a No. 13 seed.

And while they weren’t satisfied with any moral victories, they learned an important lesson from that eight-point loss.

“Everyone realizes — and more importantly, our guys realize — after that Duke game that we can literally play with anybody in the country,” Keatts said. “We have confidence. Our guys believe in themselves.”

The Seahawks are winning with the same formula — and many of the same players — as in 2016. They run the same uptempo full court press, lead the league in scoring at 85 points per game, a six-point improvement, and are tops in the conference in 3-pointers, steals, turnover margin and, perhaps most importantly, assist-to-turnover ratio.

“We really share the basketball, and a lot of that comes from being familiar with the guys that you’re playing with,” Keatts said.

“I’ve seen a change in them as far as maturity, and really, when you look at it, they feel like they’re going to win every game, no matter what the situation is,” Keatts said. “Their confidence level is high because it’s almost like we’ve been in this situation before.”