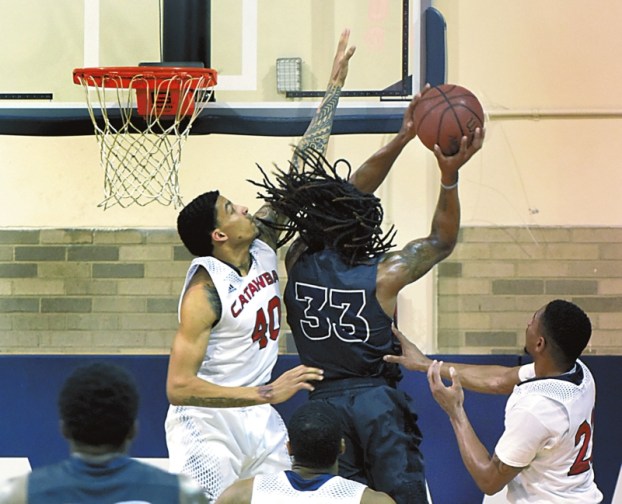 SALISBURY — Muscular Lincoln Memorial strolled into Goodman Gym looking as much like a football team as a basketball squad.

The Railsplitters didn’t just offer twin towers, they showed off imposing triple towers in the 6-foot-9 range — plus guards who looked like linebackers.

The first impression the visitors made was one of physical intimidation, and then the Railsplitters backed it up, overpowering Catawba, 91-82, despite a spirited effort by the Indians on a well-attended Senior Day.

“We wanted it for our seniors, but those guys are just bigger than we are,” Catawba junior Jerrin Morrison said. “Those guys are wide. It’s tough to fight through those double screens when they’ve got shoulders that wide.”

Catawba got 24 points from Jameel Taylor, 23 from Morrison (on 10-for-15 shooting), and 19 from senior Rakeen “Rock” Brown. As Morrison exited Catawba’s locker room, LMU coach Josh Schertz told him he’d been the best player on a floor brimming with talent, but that wasn’t much consolation.

Lincoln Memorial, ranked sixth nationally by the media and 11th by the coaches, is the SAC’s best rebounding team. Catawba is the second best. Catawba coach Rob Perron knew that the struggle on the glass would tell the tale.

“They’re the best rebounding team in our league, but today we needed to be No. 1,” Perron said.

Disaster struck immediately. Catawba would lose on the glass, 47-37, in part because starting center Troy Warren had two fouls  just 83 seconds into the contest.

“That hurt a lot,” Morrison said. “Troy is the best hope we had for boxing out Chris Perry and he also would’ve made Perry work hard on the defensive end.”

Perry is important. He shoots 70 percent and leads the nation in that category. He shoots that kind of  percentage because most of his shots are going straight down.

Even with Warren sitting, Catawba was fantastic in the early going. Morrison was burying mid-range jumpers from all angles, while Taylor was flying straight to the rim and finishing.

“Catawba was playing more physically and more aggressively and they were a lot quicker than we were early in the game,” Schertz said.

Midway through the first half, the Indians led 27-16. That was high tide.

“Choice was in foul trouble, and they made the decision to stay with him because they had to play him — they were down double digits,” Perron said. “We had an opportunity there to attack him, but we didn’t get that third foul on him.”

The next seven minutes were a blur of Catawba turnovers, Catawba misses, and Lincoln Memorial rebounds, transition hoops and 3-pointers. With 2:22 left in the half, the Indians trailed, 45-33. They’d been outscored, 29-6, in a blistering stretch.

“We played a pretty good game,” Perron said. “But we stuffed most of our of mistakes into those seven or eight minutes in the first half. Against that team, that’s enough to beat you.”

Schertz said his team didn’t panic because it’s been behind often in February.

“The last four Saturdays, we’ve gotten down double digits and had to come back,” Schertz said. “We knew this would be a tough one. Catawba has won 18 games, but they’ve lost many tough games. They could’ve won 22 or 23. They’re a great team, and we knew we wouldn’t win here unless we played well.”

Brown drained difficult shots in the second half for the Indians, but they couldn’t make any sort of run. Lincoln Memorial kept the Indians (18-10, 12-10) at arm’s length and led by as many as 16 points.

“We executed parts of our game plan,” Perron said. “But never all of it.”

“I thought they guarded the heck out of us,” Schertz said. “Perry had a lot more misses (5-for-16) than usual. But we hurt them with our offensive rebounding and we had an advantage at the 3-point line.”

Some of the stats couldn’t have been more even. Catawba shot 30-for-71 from the field, while Lincoln Memorial shot 30-for-70.

“They’re a great team,” Morrison said. “They’ve been there and they’ve done it in the national tournament and they’re nationally ranked for a reason. They don’t waste any possessions. If you make a mistake, they will capitalize.”

Catawba will be seeded sixth for the SAC tournament and will travel to face No. 3 Wingate on March 1. Catawba destroyed Wingate on Wednesday. The Bulldogs will be eager for revenge.

By David Shaw sports@salisburypost.com CHARLOTTE — Just like that, the music has stopped for Livingstone’s never-say-never men’s basketball team. The... read more