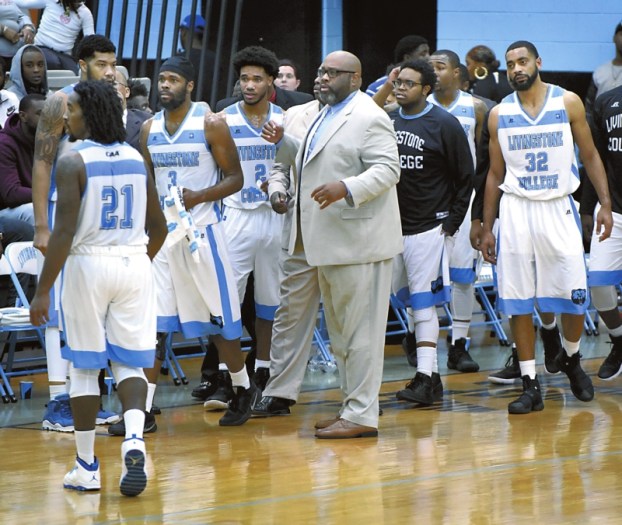 Wayne Hinshaw file photo/for the Salisbury Post ... Livingstone’s season came to an end Friday night in Charlotte with a 71-69 loss to Bowie State in the semifinals of the CIAA Tournament. The Blue Bears and head coach James Stinson, center, are shown from a game earlier this season.

CHARLOTTE — Just like that, the music has stopped for Livingstone’s never-say-never men’s basketball team.

The Blue Bears’ tune fell off the charts Friday night at the Spectrum Center, where Livingstone stumbled across the finish line and fell, 71-69, to opportunistic Bowie State in the CIAA Tournament semifinals.

“Hat’s off to Bowie State,” coach James Stinson said after Livingston (11-17) committed a season-high 30 turnovers in its season finale. “They did a tremendous job. This has been familiar territory for us for a long period of time, but we have to accept it in good faith.”

Let the record show that Livingstone went down — but it went down standing up. The Blue Bears rallied from a nine-point deficit with a little more than nine minutes to play and took a 67-65 lead on Jimmy Wilson’s right-side hook shot with 2:36 remaining. A fifth straight trip to the championship game looked promising until late giveaways cost LC the chance.

“Mental lapses. That’s what got us,” Wilson said. “We had 30 turnovers and we were still in the game. It shows that we were doing other things well.”

Wilson and his teammates expected more after Livingstone surprised Chowan in Thursday’s quarterfinals. But Bowie State (15-14), a No. 4 seed out of the league’s Northern Division, outscored the Blue Bears, 6-2, down the stretch and ended the game when Wilson’s inbound pass to Desmond Stanback was bobbled and stolen.

“Our games with Livingstone are typically like that,” winning coach Darrell Brooks said after the Bulldogs earned a berth in tonight’s tourney final. “We didn’t always play pretty, but we battled. My guys raised their level tonight.”

Livingstone was ginsu-sharp from the field in early going and built a 20-8 lead when sophomore David Duncan hit both ends of a one-and-one with 12:24 remaining in the first half. BSU got a spark when Ahmaad Wilson buried a 3-pointer and game-MVP Michael Briscoe scored on a goaltending call. It turned into a bonfire when the Bulldogs closed the half on a 15-4 run and held Livingstone without a basket for the last eight-plus minutes.

The Blue Bears spent the second half playing catch-up, drawing within 55-52 on freshman Roger Ray’s three-point play with 7:59 to go. Three minutes later, they surged in front, 63-62, on Stanback’s spinning, baseline layup.

The lead changed hands for the last time when Briscoe, who scored a game-best 24 points, nailed a 3-ball from the right side with 2:02 left.

“I appreciate what this team has done,” Stinson said afterward. “We tried to be uplifting for our school and the Rowan County community. It’s just disappointing because we expected more. We didn’t meet our goals today.”

Livingstone was paced by Ray, the reserve point guard who shot 5-for-10 from the field and scored 17 points. But he recorded only one assist and turned the ball over five times. “He plays fearless,” said Brooks. “He’s a little guy but he’s not scared of anybody. I hate that we’ll have to battle him for the next three years.”

Not to be overlooked was yet another double-double performance by Duncan. Despite being boxed and battered by Bowie State’s suffocating defense, he managed 11 points, 19 rebounds and four blocked shots.

“I was double-teamed and sometimes triple-blocked out,” he said taking only six shots from the field. “It was tough, but that’s okay. We’re going to come back next year and do some great things.”

NOTES: Duncan confiscated 49 rebounds in two tournament games, including a a school-record 30 in Thursday’s quarterfinal win over Chowan. … This was Wilson’s last appearance in a Livingstone uniform. A senior academically, he’ll enroll in UNC-Charlotte’s grad school program in the fall. … The Blue Bears shot 46.8 percent from the floor and converted 22 of 24 free throws. … Bowie State, which won the league championship in 2013, will meet Fayetteville State (No. 4 seed in the Southern Division) in tonight’s final.

By Mike London mike.london@salisburypost.com SALISBURY — Ol’ Mo is fickle. After dating the Salisbury girls for a while, he dumped them and... read more