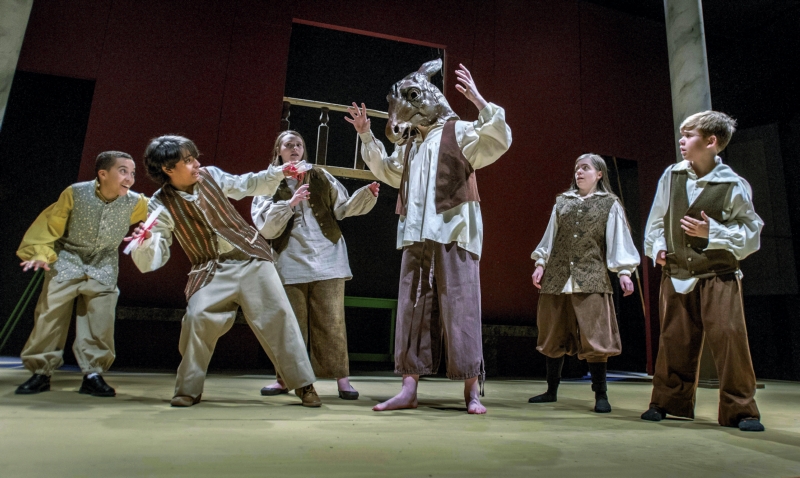 This Friday marks the closing weekend for the Norvell Theater’s production of “A Midsummer Night’s Dream,” but local students managed to catch a show before the Shakespearean classic makes its exit.

“The Shakespearean drama ‘A Midsummer Night’s Dream’ was a wonderful representation of the book by the Piedmont Players. From a purely dramatic standpoint, the actors onstage did a wonderful job not breaking character whenever there was a distraction from the audience.

“The casting was perfect, because the people seemed to be perfectly in-tune with their character. However, there was a technological flaw — their sounds were very inconsistent and did not convey the sense that they were in a city or in a wood. The movements onstage seemed to be a tad robotic at times, and the fight between Helena and Hermia seemed forced by the actors. The blocking person should try to get them to channel inner hatred for a person to try and make the fight seemed real.

“Going back to the casting, Elijah Carpenter took full control of the character of Bottom (who was really Pyramus) and took it to the next level. At times, it seemed that the other actors on stage were looking at Elijah like, ‘What the heck are you doing?’ I don’t know if that was written in the script as Bottom being an idiot, or if he genuinely cared that much about putting on a good show. Either way, his portion of the performance was spot-on ….

“Another person who nailed their part was Ben Zino, who played the part of Puck, the mischievous goblin who messes up the lives of the four lovers. He had the face of one who always seems up to play a prank.

“Overall, the performance was very professional. I enjoyed how they made us stand to watch it, just as they would have done back in Shakespeare’s day. The set was not historically accurate but was easy to transition between scenes. My overall grade of the performance would have been 4 out of 5 stars. I highly recommend this play to anyone looking for a reason to get out of the house on a Saturday night.”

“Going to see ‘A Midsummer Night’s Dream’ was the best decision I could have made.

“The stage was close, offering an up-close and personal view of the characters as they danced and exuded the personalities and quirks of their assumed identities. Each person portrayed their character beautifully.

“My favorite character was Hermia, played by Mariah Hill. She did an incredible job of showing the character’s struggle between her friend’s conviction that she is being played for a fool and her own feelings of heartbreak while Lysander (played by Joseph Clark) is under the spell put on him by Puck (Ben Zino). I truly felt her despair as the two girls fought each other.

“It was very amusing to watch Elijah Carpenter dance across the stage as Bottom, blissfully unaware of his unfortunate facial rearrangement.

“He brought an air of humor to the experience that was greatly appreciated by all those in the audience and on stage. It definitely eased any nervousness the other actors may have felt.

“All in all, this play was thoroughly enjoyable and definitely a must-see. Make sure you read up on your old English in order to understand what they’re saying, however. Otherwise it’d be a midsummer’s nightmare trying to figure out what’s going on!”

“This was a play that was wonderfully directed by Reid Leonard. From watching the play, it was easy to tell how hardworking his actors were and how much time he put into them.

“Altogether, the play was enjoyable and I had a lot of fun watching it. I would definitely recommend it.”

“I think the director, Reid Leonard, did a great job showing us what it might be like to live in their time and go to see a play. I also like that it was changed a little and that it made me and everyone else around me laugh.

“I think one thing he could have done was change some of the language so it was a bit easier to understand.”

“I think that Piedmont Players Theatre did a wonderful job imitating ‘A Midsummer Night’s Dream.’ I loved this play very much. I will definitely go and see it again.”

“I actually really enjoyed this play. I thought that it was very funny. One of my favorite characters in the play was Bottom, he had some pretty funny voices and facial expressions. He also was pretty loud, which made me laugh so much to where my stomach hurt.”

“I thought that the Norvell’s production of ‘A Midsummer Night’s Dream’ was a very good play. I found it very interesting how the stage was turned around. I was very shocked; it was not what I was expecting.”

“Some of the actors were good and some were great. Bottom was a crazy, weird and very odd actor. He was a very funny guy. He made me laugh.”

“In the play ‘A Midsummer Night’s Dream’ there were two strong female characters that graced the stage. Hermia, played by Mariah Hill, an 11th grade homeschool student, and Helena, played by Chloe Corley, an 11th grade Graystone Day School student, were portrayed as two independent fierce leading ladies. They both carried themselves with sass and spunk that left the audience wondering what they were going to say or do next.”

“I had a great time at the theatre. I was pleased by the beautiful, authentic and realistic experience. Everything added to the play, from the pillars, arches and flowers to the lighting, together it came to life. The costumes were chosen and worn well.”

“I liked the old style costumes. They were very pretty and well made. I enjoyed the play but it was sometimes hard to understand the old language they were using. In some areas of the play it was very exciting. Some areas were funny and sad. The love story was a little confusing, but towards the end of the play I began to understand the love story more. I hope as a drama class, we can go see more plays together. It is very fun and enjoyable.”

“Even though some of my peers didn’t, I really enjoyed the play and would love to see it again. There were several different things and characters that I loved in the play. The stage was beautiful and realistic and really set off the older look the play should have. I would encourage anyone to go watch ‘A Midsummer Night’s Dream.’”

“With the exception of the director and costume provider, the entire cast and crew were made up of students from fifth grade to high school seniors, which made this play all the more impressive.

“The authenticity of the set made me feel like I was experiencing the play during Shakespeare’s time. The stage was set up to look exactly like the Globe Theater’s stage in England, and the actors wore costumes that were realistically close to what the actors wore when this play was created.

“I found it easy to hear everyone, but am glad we spent time reading the play before-hand to get a basic understanding of what to expect.”

“The play itself was at certain points confusing, with me not able to understand old English very well, and the scenes changing.

“Shakespeare was brilliant to put a play in a play just for comedic purposes and involving the actors to be involved with the main story.”

“A Midsummer Night’s Dream” will have its final shows at The Norvell Friday and Saturday at 7:30 p.m.

Tickets are $12 for adults and $10 for students and seniors. For tickets call 704-633-5471 or purchase online at PiedmontPlayers.com