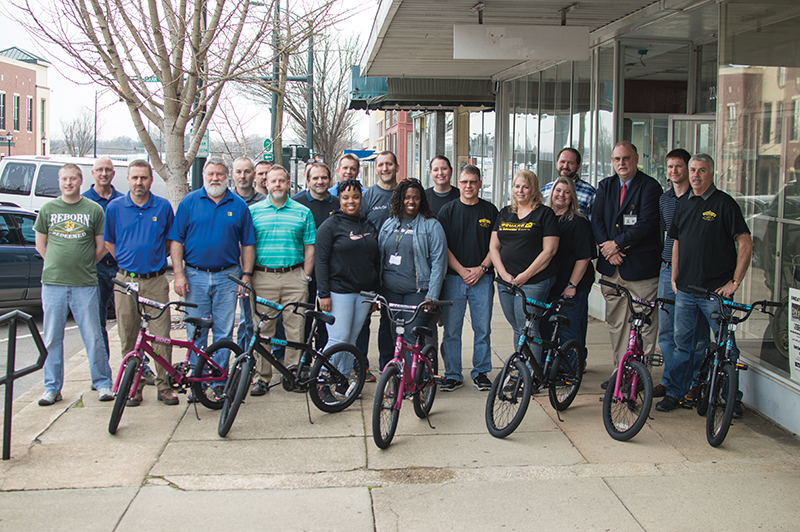 Schneider Electric employees pose for a picture in February after putting together several bikes for Rowan County's One Church, One Child Program as part of a team-building exercise. Josh Bergeron/ Salisbury Post

SALISBURY — When Schneider Electric employees came to town for a team-building retreat on Wednesday, they did more than get to know co-workers.

With some help from local nonprofit The Pedal Factory, the employees built and donated several new bicycles to Rowan County’s One Church, One Child Program. The program — a partnership between the Department of Social Services and local churches — provides safe, healthy environments for children affected by sexual, physical or emotional abuse.

“It was important for us, for our team, but we also wanted to give back to the community because the community has given to the plant as well,” said Rhonda Robinson, who works at Schneider’s Salisbury facility.

Robinson and more than a dozen other Schneider employees built six BMX-style bicycles at the Pedal Factory in downtown Salisbury. Some of the employees were from Salisbury. Others flew in from other states.

Jon Hunter manages the One Church, One Child Program and said he’s already got a home for one of the bicycles. Other bikes will go to children depending on individual circumstances.

Hunter said the One Church, One Child program is grateful for the bicycles. During a short speech, he provided the Schneider Electric employees with some 2016 statistics about Rowan County.

• 2,587 reports of abuse or neglect were received by the Rowan County Department of Social Services in 2016.

• Through grant funds and donations, the program provided 248 beds to children.

• 951 children came to the One Church, One Church Program’s assistance center at 1312 N. Main St. in Salisbury

Hunter said it’s important to note that only people who have an active case with the Children’s Services Division of the Department of Social Services can receive help through the One Church, One Child Program.

Todd Rosser, a co-founder of Pedal Factory, said he would like to have a number of other businesses have similar retreats.