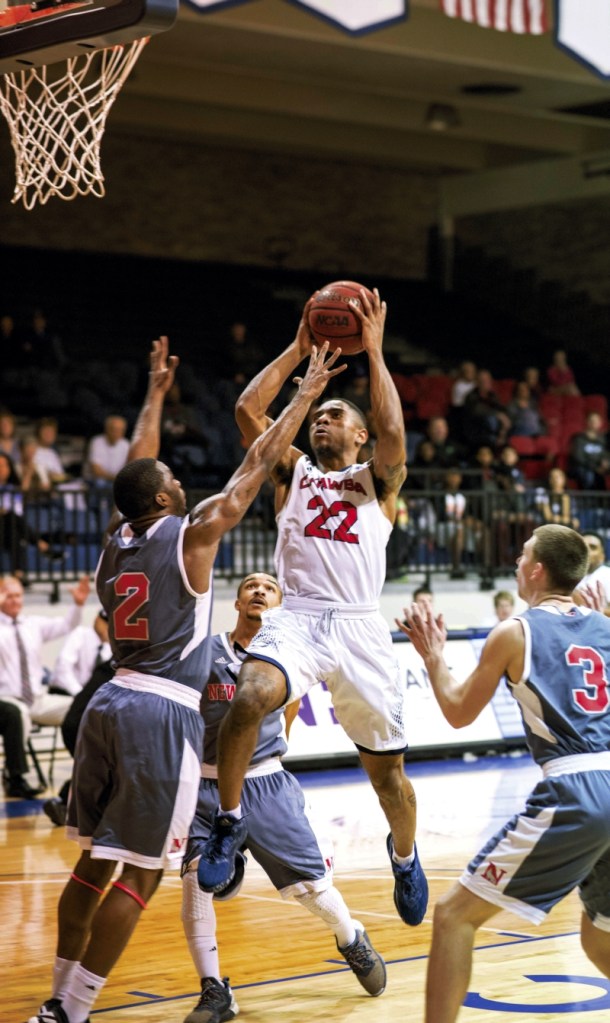 At 7 a.m. on Wednesday, an inspired Morrison texted Catawba head coach Rob Perron with a three-word message — “I want Baez.”

“I’ve made a commitment to being a better defender,” Morrison said. “I wanted to guard him. Mike Baez killed us at Wingate.”

On Wednesday, Baez made zero field goals in the first half, while a twisting, spinning, soaring Morrison was making eight. That one-sided matchup had a lot to do with Catawba leading at the break, 46-33.

“We told Jerrin he could start out on Baez and we’d see how it went,” Perron said. “But we never had to change it.  As a team, we did a good job defensively. We defended ball screens in three different ways tonight,  instead of the usual two, and we never let Wingate get comfortable. Guys executed.”

Wingate (18-9, 15-6 SAC) is a fine team, third in the SAC standings, ranked seventh in the region. The Bulldogs entered the game with outstanding rebounding numbers and exceptional balance.

“Their balance is something we talked about,” said Catawba guard Rakeen “Rock” Brown. “Wingate has six double-figure scorers, but only two scored in double figures tonight. Jerrin got it all started for us  on the defensive end.”

A lot of Indians played well. Morrison scored 24.  Jameel Taylor shrugged off a bug that knocked him out of practice on Tuesday and scored 15. K.J. Arrington’s 11-point night included an insane shot in the lane on which he put the ball behind his back in the air before scooping it in.

“There were some possessions where we were like a football quarterback going to our third or fourth read,” Perron said. “Our offensive rebounding gave us a lot of extra chances.”

When Anthanee Doyle made a 3-pointer for Wingate with 12:35 remaining, the Bulldogs were down 58-45, and there were still plenty of reasons to expect a charge by the visitors.

But Brown smothered the potential rally before it had a chance to ignite. Coming out of a timeout, Taylor found Brown for an open 3-pointer, and he nailed it.

“When I get my feet set, I’ve always got confidence that I’ll knock it down,” Brown said.

Not long after that, Wingate’s Keith Griffin wheeled in the lane for a patented post move, but the quick-handed Taylor stripped him of the ball and Catawba had a chance to run. Taylor, his head swiveling like a snake, located the hot hand behind him— Brown.

“Jameel is such a good player, such a smart player,” Brown said. “I knew he’d find me, and I was ready for that shot. That 3-pointer took all the wind out of their sails.”

Those consecutive 3-pointers by Brown were knockout blows. There was 9:52 still left on the scoreboard, but Catawba’s lead was 19 and Wingate was done. The lead would swell to 34 at one point.

“I’m sure Wingate has played better,” Perron said. “But we really did play well. We rebounded, we defended and we ran, and that’s what we need to do to be successful.”

From start to finish, it had to be Catawba’s best game of the season and it may have been the most complete game of Morrison’s career.

“We all locked in and we played for each other,” Morrison said. “It was very emotional. This is the last rodeo for our seniors. We wanted this one for them.”