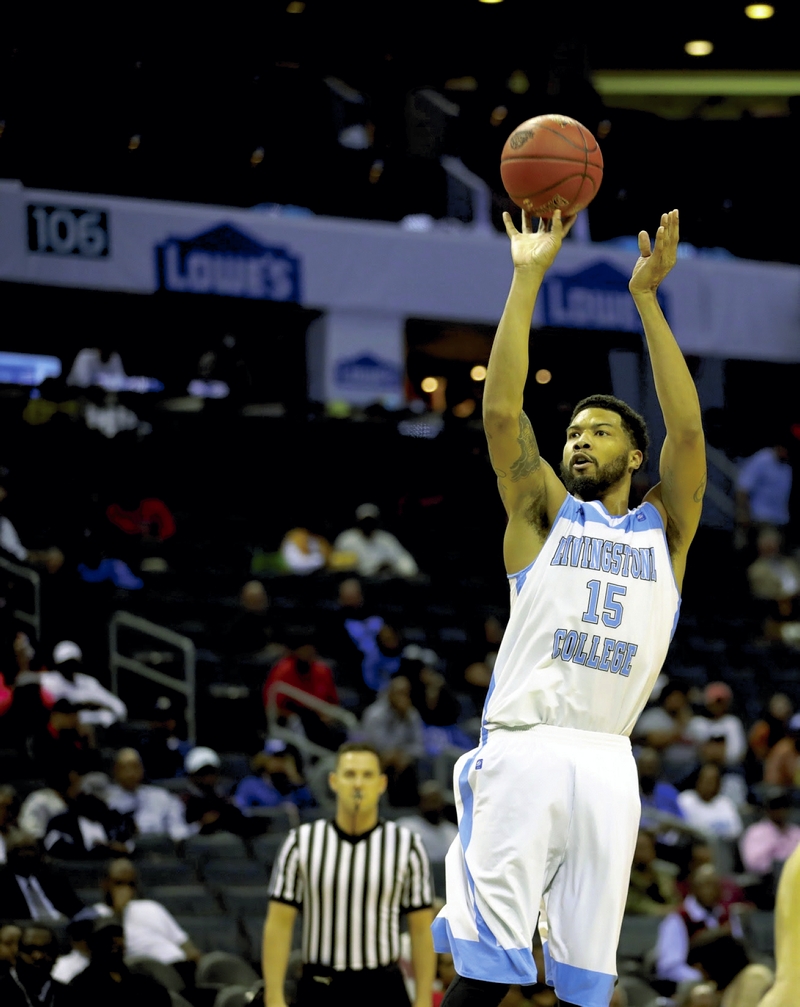 Photo courtesy of the CIAA ... Livingstone’s David Duncan (15) goes up for a shot during Thursday’s CIAA Tournament quarterfinal game against Chowan at Charlotte’s Spectrum Center. Duncan had 13 points and a school-record 30 rebounds in the Blue Bears’ 74-69 victory.

CHARLOTTE — As long as the Livingstone men’s basketball team had been invited to this CIAA party, it figured it might as well dance.

So the Blue Bears danced throughout Thursday afternoon’s quarterfinal at the Spectrum Center, where they overcame a nine-point, second-half deficit and stunned Chowan, 74-69.

“It’s nothing spectacular,” coach James Stinson said after No, 2 seed Livingstone (11-16) advanced to tonight’s semifinal round. “Just win and advance. Everyone in the CIAA gets into the tournament, but we wanted to take advantage of the opportunity presented to us.”

It was a golden opportunity — as well as a chance to avenge an 18-point loss to sharp-shooting Chowan on Jan. 30. This time, Livingstone didn’t allow a field goal in the last three minutes and laid down a 12-2 finishing kick, playing as though Jan. 30 never happened.

“We just got outplayed,” losing coach Brett Vincent said, after the Hawks (18-9) were ousted from the tournament. “We led the league in 3-pointers this year and we missed 14 of them. We missed a ton of layups right at the rim. Some of that was us, some was them. You’ve got to give the other team some of the credit.”

The other team got marquee performances several players, but none was more illuminating than David Duncan’s. The 6-foot-6 forward was again master of his domain, reeling in a school-record 30 rebounds, including 13 off the offensive glass. He added 13 points, three assists, a blocked shot and was credited with his ninth double-double.

“When they told us he had 30 (rebounds), I thought they were joking,” said Livingstone guard Cameron Burhannon. “I was shocked. I wasn’t counting, but I knew it was a lot.”

Duncan, a sophomore recently named to the all-conference team, brought his ‘A’ game. He grabbed 19 rebounds in the second half, when Livingstone rallied from a 57-48 deficit in the last 11 minutes.

“It was definitely my focus today,” Duncan said. “Getting to the boards and getting rebounds. I knew I had about 10 at halftime, but 30 is a lot.”

Livingstone — the tournament champion in 2014 and 2015 — wasted little time making itself at home. It used two early, major-league dunks by Burhannon to build a 15-3 lead in the first five minutes, then used Emarri Bailey’s 10-foot jumper to go up, 23-9, with 11:12 remaining in the first half.

Chowan responded with a charge of its own and inched to within 33-32 at the half, thanks to senior Carlos Arroyo’s hustle layup at the buzzer.

“We started out well for a change,” said Stinson, who has now coached 802 collegiate games. “Then, toward the end of the half, we started to fade. We had to regroup, take our time and get better.”

First, the Blue Bears got worse. Chowan took its first lead of the game when guard Tim Hewett beamed in a 3-ball from the right side, just 18 seconds into the second half. By the time teammate Jeremy Smith hit a layup 10 minutes later, the Hawks led by nine points and LC’s season was circling the drain.

“You know, we came out in attack mode and punched them in the mouth,” Burhannan said after shooting 8-for-12 from the field and scoring 16 points. “Then we gave (the lead) away. I told myself to stay calm, stay composed, and that was it. We never gave up.”

They never caught up until Duncan was hacked trying to flush down one of his signature jams with 41 seconds to go. After an acrobatic, airborne reaction, he made the second of two free throws, tying the score 68-68. Then with 19.1 seconds on the clock Duncan sank two more free throws to put the Blue Bears ahead for good.

“(Duncan) is a big, strong player who knows how to work his body,” Arroyo said after pacing Chowan with 14 points. “I’m disappointed he played so well against us, but like (Vincent) said, that was part him and part us. We should have controlled that game a little better.”

Instead, it’s the warts-and-all Blue Bears (No. 2 seed in the Southern Division) who move on to face Bowie State, 84-78 upset winners over Northern Division No. 1 seed Virginia Union, in tonight’s 7 p.m. semifinal.

“We know our record is 11-16,” Duncan said, outside the post-game interview room. “But here we are. This is our story now.”