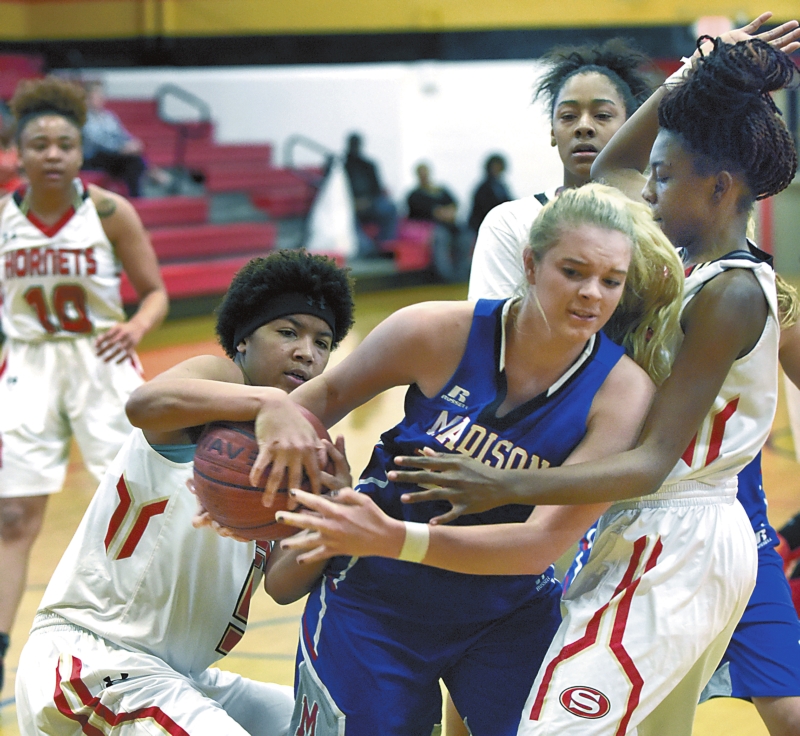 SALISBURY — Ol’ Mo is fickle. After dating the Salisbury girls for a while, he dumped them and took the Madison Patriots to the prom.

The eighth-seeded team in the West, Madison knocked the Midwest No. 1 seed out of the 2A playoffs, 58-46, here on Thursday night.

“Ol’ Man Mo is not loyal, and he’ll leave you,” Madison coach Jeff Loven said with a smile. “But then we found him again and he sat on our bench the whole fourth quarter.”

Madison played a perfect fourth quarter — 6-for-8 from the field, 12-for-13 from the foul line — and pulled away from a Salisbury team playing perhaps its worst eight minutes of the season. The Hornets shot 1-for-12 in the stretch run and couldn’t buy a free throw.

Salisbury (21-3) was dysfunctional at the start and fatigued at the finish, but played like the sixth-ranked team in 2A in the middle two periods. Sophomore  Bryanna Troutman scored 20 points for the Hornets, pulled down 10 rebounds and blocked three shots, but she was a solo act most of the time.

Madison (21-7) got off the bus after a long ride from the mountains and went to work. The Patriots took a 16-5 lead, as Hornets took turns throwing the ball off the wall. Salisbury had more turnovers (9) than shot attempts (8) in the first quarter.

Salisbury coach Lakai Brice’s pleas for her team to settle down were answered late in the second quarter. Troutman was the only Hornet to make a field goal for the first 14 minutes,  but Anayia Fulson got her initial bucket on a drive with 1:25 left in the half, and Maria Capito’s 3-pointer got the Hornets within two. After another assault on the rim by Fulson, the Hornets, despite ugly foul shooting and 33-percent field-goal shooting, had gotten even at halftime, 23-all.

“We were in foul trouble, but a lot of kids who don’t normally play a lot of minutes were stepping up and keeping us in the game,” Loven said. “We were having to play a lot of 2-3 zone because we knew we couldn’t match up with them. We didn’t have any way to match up with Troutman.”

Brice wanted a fast start to the second half — and got it. Capito hit two quick 3-pointers, Fulson exploded to the rim again, and the Hornets led, 31-23. Madison was reeling, as Loven begged for a timeout. It looked like the Hornets might go on to win by 20.

“Basketball is a game of runs, but you have to sustain those runs,” Brice said. “At that point, I did feel good about where we were. No. 11 (Mars Hill-bound guard Brooke Vilcinskas) was in foul trouble,  and we had all the momentum.”

“Most of the games we’ve lost this year have been because of the third quarter,” Vilcinskas said. “So we knew what we needed to do.”

The third quarter ended with a Troutman 3-pointer for a 38-32 SHS lead, but it was her only bucket of the quarter. The Hornets had forgotten about finding her in the post and were firing away from outside against Madison’s zone with no success.

“We did a great job to take the lead, but then there were a lot of ill-advised shots,” Brice said. “We rushed shots when didn’t need to rush. We stopped scoring, and they were getting long rebounds that allowed them to run and get easy points.”

The game performed a complete spin at the start of the fourth quarter. Hannah Chandler had a three-point play for the visitors, and Alex Nix, quiet all night due to foul trouble, nailed a 3-pointer. When Chandler drilled a long 2-pointer off a off a drive-and-kick by Bailey Cantrell it was 40-all. During a timeout with 5:30 remaining, both teams braced for the sprint to the finish line.

“We could feel momentum turning our way, especially on Alex’s 3-pointer,” Vilcinskas said.

It was tied for the final time at 42-all with 3:35 remaining when Troutman made a steal, drove hard to draw a foul, and made her two free throws. That was unusual. Salisbury went 14-for-28 from the foul line.

With 2:32 left, Cantrell blew by Salisbury’s defense for a layup, and the Patriots led by four.

Then Salisbury’s Mystjkal Phiffer missed twice in the lane, and with all the Hornets crashing, Vilcinskas got a breakaway for a 48-42 lead with 2:10 left.

Alexander made two free throws to get the Hornets within four, and the Hornets had their press set up. Cantrell escaped a double-team in the backcourt — and attacked — firing a pass to Chandler, who in turn, found a cutting Vilcinskas slicing down the lane for a three-point play. That was the dagger. That pushed the Hornets into desperation mode.

“We knew they were going to press, and it seemed like they were all over the place,” Cantrell said. “I really didn’t know what was going to happen on that play, but  it worked out great.”

More Madison free throws followed along with more desperate heaves by the Hornets.

“We hadn’t really played anyone quite like Salisbury,” Cantrell said. “They’re so talented and so physical. We found out that if we were going to win, we would have to be physical, too.”

Vilcinskas dribbled away the final seconds, and then she was screaming with joy, falling to her knees like a soccer player who had won the World Cup. Then a chant of “We are Madison!” started in the bleachers. A lot of people had traveled with the Patriots to see the upset.

“Madison won a state championship in 1992,” Loven said. “Coming here and beating a top seed, this might be the biggest win the program’s had since then.”

Most of the Hornets are young. They’ll learn from the unexpected home loss and they’ll have a chance to build on a 21-3 season.

“It was a a good year,” Brice said. “We are a young team, but Tyzarea Alexander is a senior, and that makes me want to cry. She was our heart and soul.”