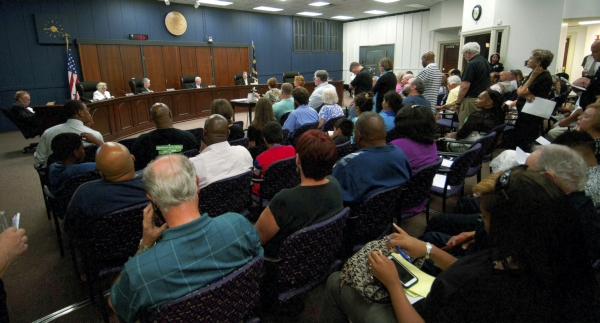 SALISBURY — For the second time in as many years, the City Council is considering whether to make changes to public comment periods during its meetings.

Last year, the council moved its comment periods to start at 6 p.m. at every meeting. That change occurred in conjunction with moving regular meeting times from 4 to 5 p.m.

The policy came up again Tuesday as a late addition to the council’s agenda.

When Mayor Karen Alexander described the potential changes, council members couldn’t seem to come to a unanimous agreement about whether to follow through. As a result, they pushed back a decision to the next council meeting, at 5 p.m. March 7.

The public comment changes included: a time limit of one hour; having a comment period at the end of meetings instead of at 6 p.m.; requiring people to sign up to speak before the meeting instead of freely speaking; and a hard limit about people who yield three minutes to other speakers. All speakers would be required to provide their name, address and contact information. Currently, speakers are asked, but not required, to provide their name and address.

Councilman David Post said he does not agree with the changes and offered alternatives. One of those is to mirror the Rowan County Board of Commissioners and have a public comment period at the start of meetings.

“I don’t want to chill comment,” Post said. “Moving it to the end, I think, has a chilling effect. … I think public comment is, perhaps, the most important thing we do.”

During Tuesday’s meeting, more than a dozen people spoke during a public comment period that lasted about 45 minutes about midway through the meeting.

Councilman Kenny Hardin said he also does not agree with the changes proposed Tuesday. He didn’t offer alternatives but said he’s OK with whatever the council decides.

Hardin said there needs to be controls on the comment period, including limits on speaking time.

When asked later, Alexander said there was no particular issue that prompted the move for public comment changes. During and after Tuesday’s meeting, Alexander stressed that the changes she proposed are a reflection of ideas mentioned by the entire council. She said the changes would have been discussed during a prior council meeting, but one unnamed member of the board objected.

During Tuesday’s meeting, Post encouraged the council to be explicit about the reason for any changes.

“We’re addressing this issue right now because — I mean, let’s say what it is — the no-knock warrant issue has created in the last few months an issue that overtakes the public comment discussion,” he said.

Councilwoman Maggie Blackwell and Councilman Brian Miller didn’t express major objections to the changes described Tuesday. Blackwell said moving public comment to the end of the meeting benefits people who would have traveled from out of town for a business item on the agenda. Miller said he’s been frustrated with the format of the comment period. Miller said he doesn’t know the right answer but that he would be willing to offer a motion to approve the changes proposed Tuesday.

At one point during Tuesday’s discussion, things briefly became tense between Hardin and Blackwell as she talked about ways speakers could fit their comments into the three-minute time period. Before she was on City Council, Blackwell said, she and members of her neighborhood would plan ahead before speaking at a council meeting. She said it’s possible to get a point across in three minutes but speakers should not ramble.

“I planned ahead to get everything in my three minutes, and, if there was more that needed to be said, we got another neighbor to come and say the rest,” Blackwell said.

Interrupting Blackwell, Hardin said she was being judgmental. Depending on the issue that’s most important to a specific neighborhood, people do better when rambling, Hardin said.

“When my phone rings until 2 or 3 o’clock in the morning for different neighborhoods, it’s not the same thing,” he said.

Hardin said he can’t tell who is calling him from different neighborhoods.

Responding, Hardin said he had asked for Blackwell’s permission to speak and she agreed. Blackwell said he didn’t.

“Well, then, you should be more forceful then in your response,” Hardin said. “I did not interrupt you.”

A period of silence followed the discussion, and Alexander asked for Blackwell to finish.

Asked later if she would push for the public comment changes with three of five council votes, Alexander dodged the question.

“It’s not about me. It’s about the entire council,” she said. “Someone would have to make a motion.”