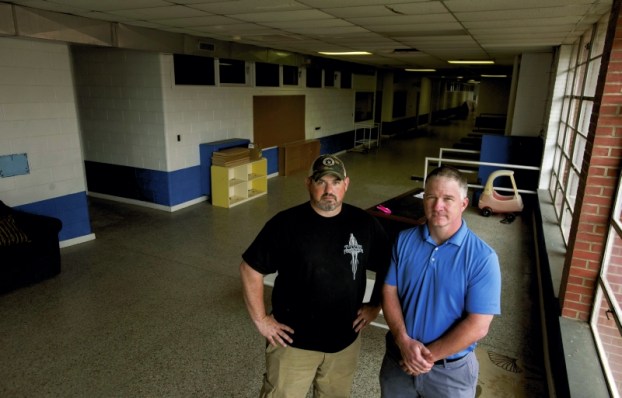 CLEVELAND — The building at 603 E. Main St. in Cleveland has a colorful history. It started life as the R.A. Clement School and then became a junior high school, transformed into a YMCA in the early 2000s and even housed a church. This spring, its path will take an unexpected turn as a Mooresville-based company works to bring a “force-on-force” technical training facility to the region.

The company, ForceTEC, is managed by Thomas Pinkham, 41, a former Bank of America employee. Pinkham said a training facility like this has always been a dream of his.

According to Rowan County tax documents, Pinkham and partners Doug Balog and Gavin Houchins purchased the 12,000-square-foot building and its 19-acre property for $75,000. Pinkham helped start a similar facility up north, but this is the first he will be in charge of.

When it’s up and running, Pinkham said, ForceTEC will be the largest standalone training facility of its type in the Southeast. Law enforcement personnel and civilians will be able to use the halls of the old school to run firearms training scenarios in which they face an armed opponent. The many rooms and odd corners of the building will allow law officers to train for everything from entering a house to apprehending an armed suspect in a school.

Pinkham said it’s his way of giving back to law enforcement, which is often “under the microscope” of late. ForceTEC will be a safe, controlled environment where officers can hone skills and get better at their jobs, he said.

“You can’t practice enough,” he said — particularly if you have a job that requires you to carry a deadly weapon.

“Shooting is a skill that you can lose,” he said.

The facility won’t be a shooting range, however. ForceTEC participants would face an armed opponent — though all firearms will be modified to shoot nonlethal paint rounds — so that they can learn to operate under the stress and adrenaline rush that come with a life-threatening situation. Scenario runners could role-play as everything from an active shooter to someone trying to skip out on bond.

The goal is to replicate real-life situations, such as stress, low lighting and unpredictable layout. With movable walls and a few connections, Pinkham said, ForceTEC will be able to simulate a house, a school, a church or a restaurant.

For locals concerned about noise, Balog and Pinkham said the paint rounds, a brand known as Simunition, make far less noise than a live round.

“It’s somewhere between a cap gun and a firecracker at most,” Balog said.

And they’re confident that the solid block of the building will muffle the sound.

Also planned are a breach door, a vehicle pad to run traffic-stop scenarios and lockers to train K-9 units.

Training opportunities will be available for civilians as well. Pinkham said medical personnel could use the gym to run mass-casualty training, stores could run robbery scenarios and homeowners could train for a break-in.

“You want to live in the real world,” Balog said. “You want to be trained for scenarios that you hope you never come across.”

Having role-players will allow customers to practice de-escalating a situation. For instance, private investigators or bail bondsmen could work on talking their way out of a situation if they run into an armed and angry property owner.

“It gives them the opportunity to use all the skills they already have to get better,” he said.

Pinkham made it clear that ForceTEC will be for serious training only — it’s not a paintball course.

All employees besides Pinkham will be freelance, with training sessions tailored to client needs and run by an ex-military acquaintance of Pinkham.

For Pinkham, opening the facility cuts a little close to home. He has a concealed-carry firearms license, and he has had numerous friends in law enforcement and the military. He is also from a small town in Connecticut just next door to Newtown, site of the Sandy Hook school shootings.

“My kids were in school the day Sandy Hook happened,” he said.

Pinkham and his family have since moved to North Carolina, but Pinkham said he felt as though “the stars aligned” when a school building came up for sale.

He hopes the building will be more than a training facility. The 19-acre property includes a recently upfitted gym, outdoor basketball courts and baseball fields that are still used by the community. “I have no problem continuing that,” Pinkham said.

The property will be used for tactical training only during regular business hours — 8 a.m. to 5 p.m. After hours, Pinkham said, the property will be available to sports teams and community groups or just a group of teens who want to shoot some hoops.

The zoning change has already been given a green light by the Cleveland Board of Commissioners. While the building is a “substantial investment” requiring a lot of repairs from years of vacancy, Pinkham, Balog and Houchins hope to have ForceTEC up and running sometime this spring.

“It’s a bad day that you have to pull your gun out and defend yourself,” Pinkham said. But if you do, he added, you want to be ready.

Associated Press MOORESVILLE — Home improvement retailer Lowe’s has announced its second round of layoffs in just over a month,... read more