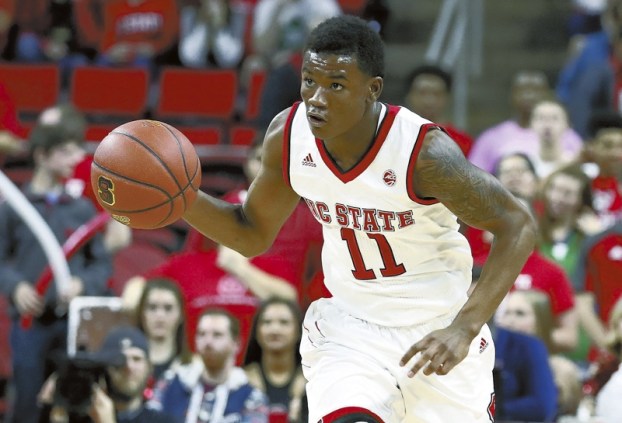 It came too late to save his job going into next season, but Gottfried was proud of the team’s effort.

“I think what’s happened is our guys have just continued to hang in there,” Gottfried said. “Our practices have been phenomenal. We’ve had great enthusiasm, great energy.”

It was the second game for the Wolfpack (15-14, 4-12 Atlantic Coast Conference) since the school announced Gottfried won’t return for a seventh season as coach. N.C. State snapped a seven-game losing streak.

“We want to send him out on a good note,” Smith said. “He deserves it.”

Georgia Tech began the night 6-1 at home in league play, but the Yellow Jackets (16-12, 7-8) had just one player, Josh Okogie with 25 points, shoot with consistency. Tadric Jackson added 17 points and Quinton Stephens had 11 points and 10 rebounds.

Ben Lammers, the second-leading scorer this season, finished with a season-low six points and missed his first eight shots from the field before hitting a turnaround jumper in the final minute.

Pastner has helped Georgia Tech become one of the big surprise stories in college basketball, but he watched with dismay as his team missed nine foul shots and 12 layups.

The Jackets waited too late to make a run. Jackson hit a 3 to cut the lead to one with four seconds remaining. After Smith hit one of two free throws to make it 71-69 with 2.9 seconds remaining, Jackson squared up for another 3 from the same spot on the right side but his shot bounced long off the rim at the buzzer.

“If we get to nine (ACC) wins, I truly believe we’re in,” Pastner said of the NCAA field.

Jackson cut the lead to six with a straightaway 3 with 1:49 remaining, but Smith answered on the next possession with a trey that put the Wolfpack up 66-57 in the final minute.

“It feels great,” Smith said. “It wasn’t pretty, but we got it done tonight.”

Henderson’s layup at the 3:25 mark of the first half gave N.C. State its first double-digit lead. The Wolfpack were up nine at halftime Ted Kapita dunked with 11 seconds to go and Maverick Rowan stole an inbound pass and hit a layup.

N.C. State: Just 9-25 in the ACC over the last two seasons, the Wolfpack played hard for Gottfried, just as they did in a nine-point loss to Notre Dame last Saturday. That hasn’t been the case too often. The Wolfpack have been blown out several times and began Tuesday’s game with the ACC’s worst scoring margin at minus-12.2. Gottfried had his team run the clock down as often as possible in the second half, and the strategy paid off with the Jackets struggling so much on their end.

Georgia Tech: Pastner often says his team began the season with the least experience in the nation, but the Jackets haven’t been rattled much at home. This game looked like a case of Lammers, the nation’s second-leading shot blocker, being tired and the team was awful at the rim. Layups just wouldn’t fall.

Georgia Tech: Visits No. 21 Notre Dame on Saturday, hosts Pittsburgh next Tuesday and closes the regular season at Syracuse on March 4.

Staff reports West Rowan’s boys earned their 18th win on Tuesday, taking an 85-74 victory at Waynesville Tuscola in a No.... read more