Johnson’s 8th title could stake claim as best ever 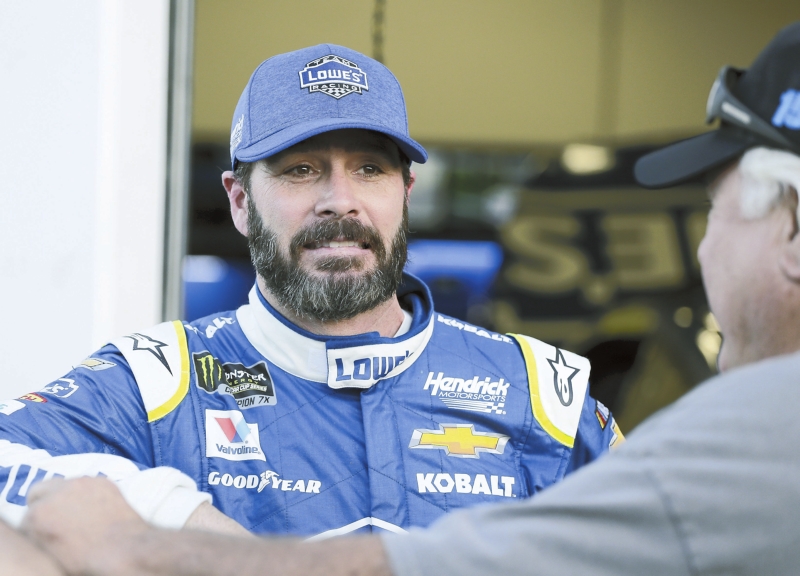 DAYTONA BEACH, Fla. (AP) — Jimmie Johnson might have had an easier time had his 6-year-old daughter asked for help with a school art project. Genevieve Johnson instead left dad briefly bewildered with a messier question:

What does famous mean?

“At school, the kids are asking her, saying, ‘Your dad’s famous,’” Johnson said. “How do you answer that question?”

Does your dad dress in a Lowe’s fire suit, slide into the No. 48 Chevrolet and race on national television every weekend? Does your dad have more than 2.3 million Twitter followers, is he besieged by autograph seekers and asked to voice cartoons on the Disney Channel?

Yes, Genevieve, your father is famous.

But the more contemplative question is this: Is Johnson the greatest to ever drive a stock car? That answer is up for debate, though arguments for other contenders thin as Johnson continues to add to his championship collection.

An eighth would push Johnson past Dale Earnhardt and Richard Petty for most ever, leaving him alone as NASCAR’s greatest.

Outside his motorhome, Johnson scratched his beard, tinged with a touch of grey, as he considered what an eighth title would mean. Johnson had retreated to Aspen, Colorado, over the winter, where the snow and ski-filled days made him want to grow his beard to roughly ZZ Top length. The King has his feathered cowboy hat. Maybe a wavy beard could become Johnson’s distinguishable feature.

What seemed cool in Aspen made him hot under the helmet at Daytona.

“I was really uncomfortable,” he said. “It just hits you the whole time.”

Beard aficionado Dale Earnhardt Jr., who shaved his own for a wedding, openly admired his teammate’s facial hair.

“That’s a bad-ass beard,” Junior said. “If I’d known he was going to come so strong, I would have worked on mine a little more. I certainly do envy what Jimmie’s got going on.”

Most also drivers envy his record run at NASCAR history.

Johnson’s shot at history hit him in 2010 when he won his fifth straight Cup title and talk about chasing eight intensified. He won his sixth in 2013, and his surprising seventh last year now makes an eighth championship seem more inevitable than a longshot.

With 80 career wins and a pair of Daytona 500 victories, the 41-year-old Johnson won’t let the record define him.

Long before he fires up the Chevy, Johnson’s championship pursuit begins near dawn with a run. Johnson long ago traded his race helmet for a bicycle helmet during off hours at the track and put a twist on his Sunday finish line by running the occasional marathon before a race.

At Daytona, he biked 42 miles on Sunday morning hours before he pulled double duty and raced in the Clash at Daytona and qualified for the 500. He’s inspired and coached members of the NASCAR family — crew chiefs, fellow drivers — and helped whip them into shape before he whipped them on the track. Johnson’s days of scarfing hushpuppies and sipping sweet tea out by a roadside barbecue stand are long behind him. He’s still an adrenaline junkie in the offseason, though his fastest turns in the winter now come navigating the snowcapped slopes in Colorado.

With a wife, two daughters and enough race trophies to stuff a storage unit, the fitness freak has never been happier. Johnson has even won over fans who had grown tired of the 48 dynasty built with team owner Rick Hendrick and crew chief Chad Knaus. Before the championship race at Homestead, Johnson was greeted by fans holding up seven fingers, not the one-finger salute he’d grown accustomed to receiving.

“I get the respect from being around a long time, now” he said. “I think the age kind of does something.”

NASCAR fans are coming around to what the drivers have known for years — Johnson is an easy guy to root for.

“I don’t know anyone who doesn’t like Jimmie,” 2010 Daytona 500 champion Jamie McMurray said. “I feel like he’s the guy that you would like not to like because he does win all the time. He’s got a beautiful wife. He’s got great-looking kids. He just kind of like has everything. But he’s just always so nice.”

Life as a stay-at-home dad will be confined to the winter for now. While Tony Stewart, Jeff Gordon and Carl Edwards have called it quits the last two years, Johnson said he’s not even thinking of retirement. He loves racing too much.

“When it feels like work someday, I’ll stop,” he said. “It hasn’t been there yet.”

Certainly not when he’s coming off a bit of a surprise championship.

Johnson was practically gifted his seventh title when Edwards’ aggressive attempt to win the championship ended in a wreck. Johnson got the restart of his life in overtime, took the lead on the very last lap, won for the first time in his career at Homestead and grabbed the final Sprint Cup trophy. Snoop Dogg played his championship party.

Johnson won all his titles in the Chase era and goes for eight under a rules revamp that divided races into segments — and every point counts. Who knows? The format could be just the jolt needed for him to win five straight championships for a second time.

“If I did it before, I guess it is possible,” Johnson said. “It’s probably not probable. But it’s certainly possible.”