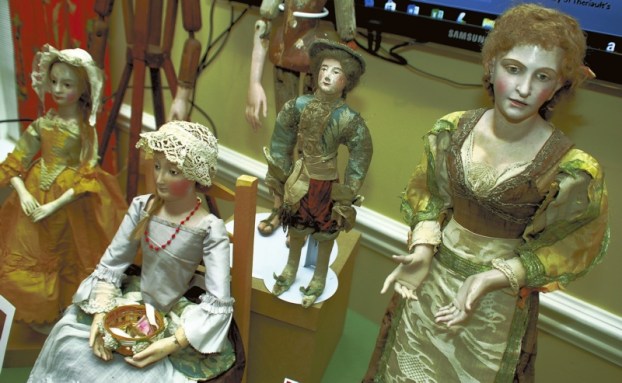 SALISBURY — Go through the home of any member of the Rowan Doll Society, and you might mistake it for a museum.

“I love my dolls,” said Jean Peeler, one of the three people who started this local group in 1980. “I have a path through my house — it’s a doll show itself.”

Linda T. Behrendt says dolls keep her and other members of the club young at heart. A wide diversity exists in what the women — and some men — collect, but all of their dolls encapsulate history, art, customs, culture and fashion.

“Dolls tell a story of a period in time,” said Robin Wyatt, who specializes in Continental (European) wooden dolls, generally from 1750 to the 1880s.

To celebrate the 35th anniversary of the Rowan Doll Society’s membership in the United Federation of Doll Clubs, the local group held a luncheon Tuesday at Salisbury Country Club. Most of the society’s nearly 30 members attended, and they heard Wyatt’s program on her special collection.

Members of the Doll Society are pretty proud of being part of one of the largest hobby groups in the world, as well as belonging to the UFDC, established in 1949. Region 8 Director Becky DeBrueler of Unique, Kentucky, attended Tuesday’s luncheon.

DeBrueler is among 17 regional directors. The UFDC has 9,250 members worldwide in its 483 clubs. Region 8, which takes in North Carolina, Kentucky and Tennessee, encompasses 26 clubs and about 600 members.

The Rowan Doll Society requires annual dues of $45, which includes the UFDC quarterly magazine. Someone who is joining must have a collection of at least 10 dolls.

All manner of dolls and collections are welcome — from antique to modern — and local collectors say the region is fortunate to have the Spencer Doll and Toy Museum and its wide variety of dolls on display with rotating exhibits.

“We collect what we can afford,” Peeler said.

Maybe it comes with loving dolls and all the things associated with them, but the Rowan Doll Society is maniacally well-organized.

“It’s a well-oiled machine,” Peeler said, knowing she was borrowing a recent line from President Donald Trump. “We have a lot of experience in organization.”

Officers of the society meet every August to plan out the next year of activities.

Some are givens: They meet at noon on the third Tuesday of each month, usually at the Rufty-Holmes Senior Center or Rowan Public Library. They lay out the monthly programs a year in advance. They talk about regular library displays, seasonal luncheons, scheduled programs at the Spencer museum, and trips to shows, museums or conventions on the horizon.

You probably have seen the members’ decorating skills — and some Victorian-era dolls — as part of Christmas at the Hall House.

The meetings themselves follow parliamentary procedure. Members buy and draw tickets for monthly raffles of doll-related prizes. There are silent auctions on occasion, and a lot of meetings include a show-and-tell at the end, during which members can share the latest addition to their collections.

Tuesday, Behrendt carried with her a treasured Brenda Starr doll, a character from the long-running serialized comic strip, “Brenda Starr, Reporter.” Brenda was known for her distinctive red hair, and Behrendt’s doll had plenty of it.

Peeler and her sister, Margie Crowell, and their aunt, Lois Hall, organized the Rowan Doll Society on Jan. 9, 1980. “We just all liked dolls,” Peeler said.

At first, they called the group “The Doll Lovers,” and their first meeting drew 13 people. The women discussed the purpose of having a doll club, then turned their discussion to projects, such as having a doll show and dressing dolls for underprivileged children at Christmas.

They elected club officers — Hall was the first president; Crowell, the first secretary — and they set dues at $5 a year. That earliest group also wrote down a goal of establishing a doll museum or historical house, something that happened a few years ago thanks to Beth Nance, her late sister, Amy, and their mother, Susan Morris.

By March 1980, the women were discussing bylaws, and they changed the club name to Rowan Doll Society. Within two months, the group had 22 members.

In March 1982, the Rowan Doll Society joined the UFDC. Peeler, Crowell and Lynda Snipes are considered charter members dating back to the 16 people who were part of the club in 1982.

Nancy Charles, Lanell Roseman and Bonnie Hodges also were among the faithful members, and they did a lot to bring in new people, such as Wyatt, and keep the club going. Wyatt is the past director of Region 8.

“We’ve become very close, much like family,” Peeler said, describing how many of the women are like sisters with one another.

Over the years, membership in the Rowan Doll Society has fluctuated from 14 active members to 30. Membership is not restricted to only Rowan Countians.

Current President Helen Thomas lives in Huntersville. She considers herself an enthusiast of French fashion dolls, and she also specializes with her husband, Wayne, in the collection of highly sought after Schoenhut wooden dolls.

Looking back, Peeler said the original organizers were shocked at how many other people were doll collectors. She recalled a friend Dee Tyler, someone she had known for 25 years through their work for Southern Bell, showing up at the early meetings.

They had never discussed each other’s love for dolls until the society was established.

Peeler brought with her to Tuesday’s luncheon a German ball-joint doll Dee had once repaired. It was beautifully dressed, also thanks to her late friend, and one of those dolls that Behrendt talked about earlier.

The ones that keep you young at heart.

A peek into the March 2017 SALISBURY the magazine

As evidence I have no life, for the past 30 years I have dedicated huge chunks of my time to... read more