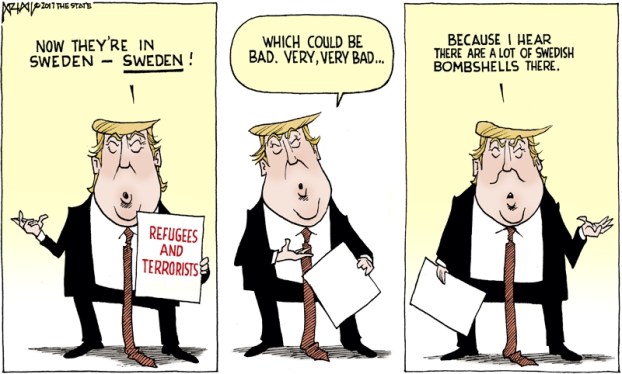 With cries of “fake news” coming from all sides, schools are stepping up — teaching media literacy to help students distinguish rumor from fact, hoax from reality.

The Sweden episode was a perfect circle of misinformation, beginning with a report on Fox News on Friday, since challenged, about the dangers of immigration in Sweden. Trump apparently saw that and brought it straight into his campaign-style speech the next day in Florida, in exaggerated form:

When the reference caused an international ruckus, he capped it off, not by setting the record straight, but by a blame-shifting tweet that fingered the media.

“We must all take responsibility for using facts correctly and for verifying anything we spread,” Stefan Lofven, the Swedish prime minister, reproved Trump at a news conference.

This isn’t the first time Trump has taken a break from decrying fake news in order to spread falsehoods himself — widespread voter fraud, anyone? Birtherism? Hillary Clinton’s drug abuse?

So let’s review some basics.

1. Compare and contrast information sources. A single source can easily get it wrong, so it’s wise to see if a number of reputable news outlets are reporting the same thing. In this case, no one was reporting a terrorist attack in Sweden — certainly not the Fox segment. A Google search would have helped. Or a quick check with someone in, say, the CIA.

2. Don’t share without verifying. One useful rule is to check three times before spreading what you think is news. Granted, that’s intended to apply to regular people who might be posting on Facebook or retweeting an article or photograph.

For a presidential speech before thousands that will be televised globally? Definitely check at least once.

3. If you put out misinformation, correct it quickly. This is not Trump’s strong suit, given his long years of spreading lies about Barack Obama’s birthplace before eventually agreeing with the obvious: that the then-president was born in the United States.

No such correction yet for the Swedish gaffe. He backed off a little in a tweet, saying that his statement suggesting a specific attack was in reference to a TV report. And, two days later, Sweden did experience a riot in an immigrant-heavy suburb of Stockholm, though it certainly didn’t bear comparison to terrorist attacks in Paris or Nice.

4. Be skeptical. The TV-obsessed president should consider that not everything on his favorite medium is true. Not even if Sean Hannity says it. Not everything the conspiracy-mongering Alex Jones — who long cast doubt on whether the Sandy Hook  massacre really happened — might confide on the phone is true. Even “Fox & Friends” makes a mistake once in a while.

A journalistic axiom is worth a thought: “If your mother tells you she loves you, check it out.” (Presidential version: “If Steve Bannon tells you you’re the next Abraham Lincoln, check it out.)

5. Use critical thinking. Granted, this is tough for our president. Last October, Trump revved up his campaign rallies with the idea that Hillary Clinton was on performance-enhancing drugs.

“I don’t know what’s going on with her, but at the beginning of her last debate, she was all pumped up at the beginning, and at the end it was like take me down,” he said at one. “She could barely reach her car.”

Where did this come from? Once again, the circle is unbroken. Roger Stone, the Trump ally and political trickster, had recently been interviewed by Jones, who runs the website Infowars.

Here’s what Stone had said to Jones: “Look, of course she was jacked up on something. I assume some kind of methamphetamine.”

Critical thinking tells us that even if we want to believe something, the trustworthiness of the source must be considered.

Since President Trump wants to change the world, he also might consider the words of George Orwell since, just like the abolitionist Frederick Douglass, the author of “1984” has done an amazing job and is getting recognized more and more.

“In a time of universal deceit,” Orwell wrote, “telling the truth is a revolutionary act.”

Time to storm the barricades.

How about a new holiday that would support North Carolina’s “First in Freedom” slogan and, at the same time, call... read more