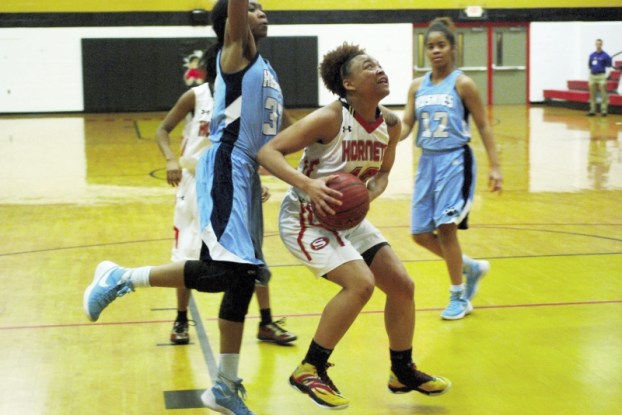 Dennis Davidson/Salisbury Post ... Salisbury guard Tyzarea Alexander (10) eyes a layup during Tuesday night’s game against Hunter Huss in the first round of the state 2A playoffs. The Huskies’ Diamond Huskey (32) defends. Salisbury won the game, 63-36.

Salisbury girls get first round win over Hunter Huss Dennis Davidson/Salisbury Post
… Salisbury guard Anayia Fulson (12) goes in for two of her game-high 20 points during Tuesday night’s game against Hunter Huss in the first round of the state 2A playoffs. The Huskies’ Alexis Murriel (10) defends.

SALISBURY — You don’t have to play a perfect game to produce something wonderful.

Just ask the Salisbury girls basketball team. While its 2A state playoff opener was far from perfect, its 63-36 victory against visiting Hunter Huss on Tuesday was certainly noteworthy.

“We’re thrilled that we got this first playoff win under our belts,” coach Lakai Brice said after Salisbury (21-2) advanced to Thursday’s second round. “We were just a little jittery because, you know, you win, you play on. You lose, you go home.”

The top-seeded Hornets will play on, despite a shooting percentage that made you want to run for cover. For three quarters, turnovers outnumbered baskets and nothing came easy.

“I think we came out a little nervous, probably because of the last game,” junior Maria Capito said, referencing Salisbury’s championship-game loss in last week’s CCC tournament. “We were putting ourselves down because we were missing so many shots. We needed to regain our confidence.”

Salisbury managed to build a 33-23 lead when under-the-weather sophomore Bryanna Troutman drove for a layup late in the third quarter. But Huss (9-15), the No. 16 seed, used a 3-pointer by Nautica Falls and a couple of short-range buckets by 5-foot-10 senior Diamond Huskey to close within 35-30 entering the final period.

“We had the right game plan,” said Huss coach Bobby Lipscomb. “We just didn’t finish. Some kids got into foul trouble and we got scared to play hard. But until the fourth quarter, we gave them a good fight.”

They did — until Salisbury received a shot of adrenalin from Capito, freshman Anayia Fulson and senior Tyzarea Alexander. The Hornets outscored Huss, 28-6, in the last period and scored the game’s final eight points. Capito beamed in a couple of 3-balls and scored eight of her 16 points in the fourth quarter.

Fulson scored nine of her game-high 20 points in the final period, including two when she crashed the boards, rebounded her own missed free throw and hit a putback that provided a 59-36 lead.

And Alexander, the cool-as-a-cucumber maestro in Salisbury’s backcourt, had 11 fourth-quarter points and finished with a double-double (15 points, 10 rebounds).

“I was just having fun,” Alexander said afterward. “I think we were all kind of frustrated at the beginning of the game. At halftime, coach (Brice) told us we needed to focus more. In the fourth quarter, we were much more of a team, playing hard and playing together.”

“We didn’t shoot the ball particularly well tonight,” said Brice. “We didn’t finish well. But at the same time, we made the plays we needed to win the game. At the end of the day, we need to be happy about this.”

NOTES: Salisbury will host eighth-seeded Madison (20-7) in Thursday’s second round. The Patriots have won three of their last four games after downing Parkwood, 74-62, in the opening round last night.