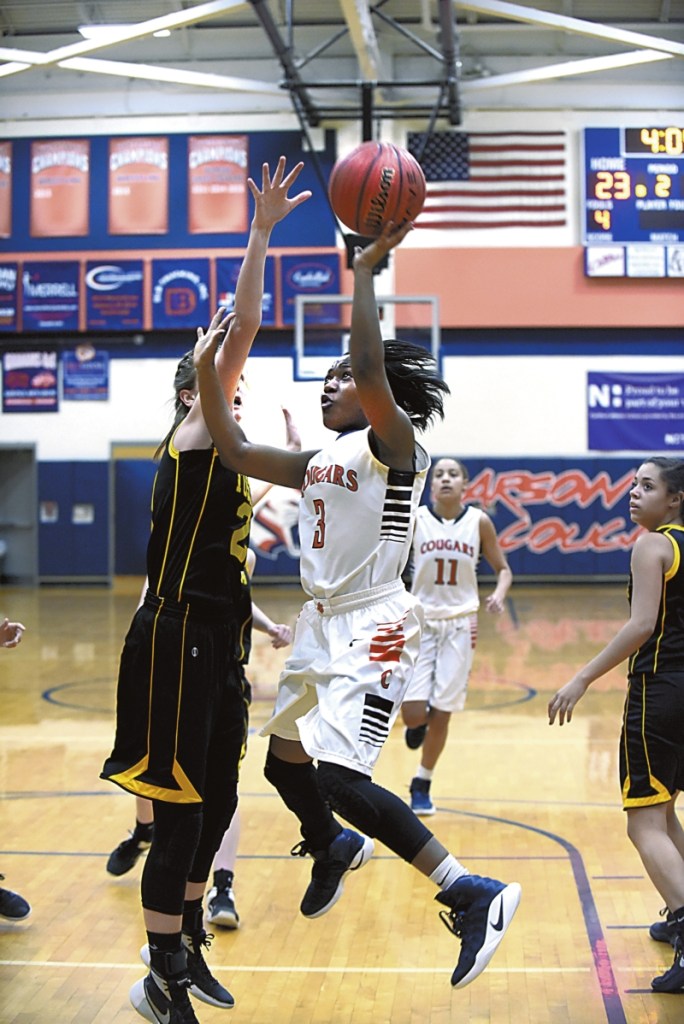 Wayne Hinshaw/for the Salisbury Post ... Carson’s McKenzie Gadson (11) goes up for a shot in the lane during Tuesday night’s 3A state playoff victory over Tuscola. Three Pioneers try to defend as Carson’s Maren Shumaker gets into position for a possible rebound. Carson won, 58-46.

But an under-the-weather Gadson is still better than most. She scored 19 points and pulled down 10 rebounds and teamed with junior guard Olivia Gabriel (23 points) to lead the Cougars to a 58-46 win against Tuscola in the first round of the 3A state playoffs.

“McKenzie has been awfully sick, really weak yesterday and only able to go to school a half day today,” Carson coach Brooke Misenheimer said. “She was sick enough that we felt like anything we got from her would be a bonus.”

Besides averaging 15 points and nine rebounds, Gadson is the point person on Carson’s press, and Tuscola, a No, 10 seed which had made a three-hour trip from Waynesville to China Grove, struggled to get the ball around or over her.

“That girl is tall and she has very long arms,” Tuscola coach Ann Gardner said. “We were shaky against their press at the start of the game. Later, we attacked and made some nice baskets.”

“They were getting all their points on putbacks,” Misenheimer said. “We just weren’t rebounding.”

But then Carson reeled off 10 straight, with six coming on 3-pointers by Gabriel.

Seventh-seeded Carson (21-6) was up 28-20 after a Gabriel steal and layup with 3:30 left in the first half, but with Misenheimer trying to rest Gadson and Gabriel late in the second quarter, things fell apart temporarily. Fueled by long-distance 3-pointers by Cierra Jackson, Tuscola closed the half with a 10-0 spree for a 30-28 lead.

“We knew we had to do a better job of getting out on their shooters in the second half,” Gabriel said. “But the biggest thing was we had to rebound better. It’s not like we’re going to out-jump people, so we’ve got to box out. It’s what we work on all the time.”

For the Cougars, it got worse before it got better. When Kourtney Krege got the first bucket of the second half, Tuscola led 32-28, and the run by the visitors was 12-0.

Kailie Ketchie only made one field goal for the Cougars, but it was the biggest one. Her 3-pointer  stopped the bleeding, and Carson fans sighed with relief. Gadson got Carson even with a free throw before Destiny Jackson got loose against Tuscola’s 2-3 zone at the same left-wing spot  from which Ketchie’s 3-pointer had flown. Jackson’s go-ahead bomb put Carson on the road to victory.

“Our intensity just wasn’t there in the first half, and I can’t really tell you why,” Misenheimer said. “But we had more fire and more passion after halftime, and we defended and rebounded better.”

Carson’s defense clamped down in the third quarter, holding Tuscola to three field goals. Gabriel ended the period with a driving circus shot that she flipped in over multiple defenders, and Carson led, 43-38.

When Gadson followed up a miss by Maci Cooper with a soaring putback, Carson led by seven. After Gabriel drove left and kicked back to Jackson, an excellent spot-up shooter, Jackson buried her second 3-pointer and the Cougars were up 48-39.

“I trust our shooters and they know to be ready for the pass,” Gabriel said.

Another Gadson offensive board led to two free throws, and the lead was 50-39 with four minutes to go.

That’s Gabriel time for the seventh-seeded Cougars, and Gabriel  dribbled while her teammates screened, and the clock melted away.

When Gabriel lofted a 40-foot side inbounds pass to Gadson for a layup and a 52-41 edge with 1:08 remaining, Gabriel pointed a finger toward the ceiling. She knew it was over.

Carson’s final two points were spectacular — a Maren Shumaker baseball pass to a streaking Gadson, who hauled in the aerial like Julio Jones, and cruised to the hoop with her first smile of the night.

“But we couldn’t make a shot in the second half, ” Gardner said. “We’re  a young team — we started three sophomores and two juniors — and our youth popped up at some inopportune times against a good team that played very hard.”

NOTES: Funeral services for Misenheimer’s grandfather, Hoy Stirewalt, who passed away on Saturday, were held on Tuesday afternoon. … Next for Carson is a trip to Gastonia Ashbrook, a No. 2 seed, on Thursday.