Media, under attack, needs to stick to the fundamentals 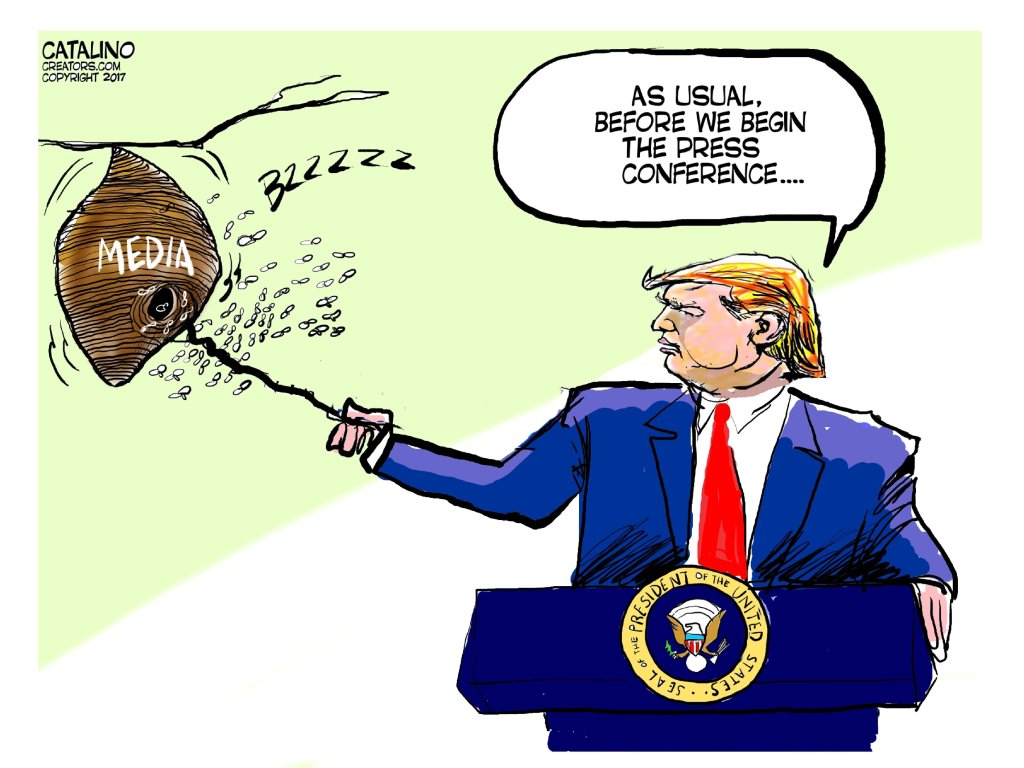 President Donald Trump, drowning amid the chaos roiling his White House after just a month on the job, made a grab for his most-familiar life raft this past week: the media.

Or, to put it more bluntly: Trump, backed into a corner by allegations of aides’ contacts with Russian intelligence officials, turned his full rhetorical firepower on the media — blasting the journalists who cover him as fundamentally dishonest, corrupt and an “enemy of the American People.”

Trump’s strategy is simple: change the conversation from a losing one (why are there so many unanswered questions about his ties to Russia?) to a winning one (the media is terrible and out to get me).

The media shouldn’t fall for it.

No industry is more interested in itself than journalism. Maybe it’s all the English majors who populate our profession. Maybe it’s that we — OK, me — were nerds growing up and just like the attention.

These are all worthy questions. And ones we should ask. But, at the moment, they simply aren’t the most pressing questions facing the country.

So, what are? Well, for starters:

1. Who among the Trump campaign had conversations — knowingly or unknowingly — with Russian intelligence officials? What was the nature of those conversations? Are any of those people part of the Trump administration?

2. Why did Trump wait weeks to fire Michael Flynn as national security adviser despite knowing that Flynn had not told the truth about his talks with the Russian ambassador to the United States? Why was Vice President Mike Pence not told before he appeared on a Sunday talk show to defend Flynn?

3. When will Trump’s tax return audit be finished? And, if no specific timeline can be offered, can he pledge to release the returns publicly as soon as the audit concludes? If not, why not?

4. How, specifically, do Trump and congressional Republicans plan to replace the Affordable Care Act? And how will the new plan be funded?

5. Will congressional Republicans agree to fund the billions that the border wall is estimated to cost on the promise that Mexico will eventually pay us back for it?

You get the idea. Trump has said and done lots — and lots — of things since being sworn in as president. Some he has explained. Many he has not.

The job of the media when faced with so much uncertainty is not to focus on itself but to return to the fundamentals: ask questions, provide context, inform the public.

The best way to combat allegations — from the president and many of his supporters — that the media is “the enemy” is to simply put our heads down and do our jobs. We aren’t the story. The story is the story. This isn’t — and never should be — “Donald Trump vs. the media.” It shouldn’t be Trump vs. anything but how his proposals check out and how they will affect the lives of Americans.

One other note: Despite Trump’s often-baseless claims about mistakes the media has made, he is not always wrong. We in the media do make mistakes. The less transparent we are about them, the more credence we give to attacks that we believe ourselves to be beyond reproach.

Don’t double-source stories. Triple-source them. Or, in the case of The Washington Post’s big scoop on Flynn’s discussions with Russian Ambassador to the United States Sergey Kislyak about economic sanctions, nine(!)-source them.

And, when, inevitably, even those best practices produce an honest error, tell readers how it happened and why.

Trump’s election — and his aggressive anti-media stance — represents a fundamental challenge to journalism in the 21st century. That’s not a bad thing. Now is the time to return to first principles: Find out what happened. And why. Nothing more, nothing less.

Chris Cillizza writes “The Fix,” a politics blog for The Washington Post, and hosts the Ciquizza podcast, a weekly news quiz.