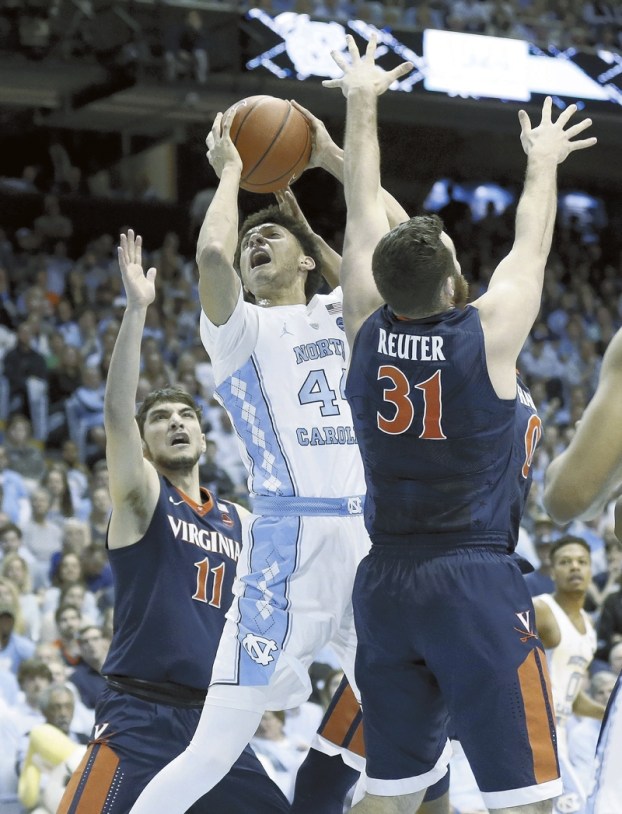 CHAPEL HILL (AP) — North Carolina managed to speed up the tempo on Virginia’s methodical offense and kept the pressure on a defense that came in surrendering the fewest points in the nation.

The result was the 10th-ranked Tar Heels maintaining their grip on first place in the Atlantic Coast Conference — and doing it in impressively lopsided fashion despite playing a pace far slower than they’d prefer.

Justin Jackson scored 20 points help UNC beat No. 14 Virginia 65-41 on Saturday night, holding the ice-cold Cavaliers to the lowest point total scored by an opponent in the Roy Williams era.

Kennedy Meeks had all of his 13 points and seven rebounds after halftime for the Tar Heels (23-5, 11-3), who shot 47 percent and led by double figures nearly all night while the Cavaliers missed shot after shot after shot.

Virginia (18-8, 8-6) shot just 28 percent and missed its first 17 3-pointers before finishing 2 for 20 from behind the arc. But Williams said he thought much of it was more about Virginia missing shots than UNC playing great defense.

“I thought we had a sense of urgency defensively,” Williams said. “I thought we tried to do it, but I don’t think we were as good as the statistics will look like.”

Maybe not, but the Tar Heels certainly kept the pressure on by running out on rebounds for all those misses and staying on the attack as the Cavaliers sputtered in the kind of game that has often tripped up the tempo-pushing Tar Heels in the past.

“Coach said we obviously like to score high, they like to score low,” Jackson said. “He said to be a great team you’ve got to be able to do both. So for us we tried to focus on still pushing the ball, still getting to the offensive glass and still trying to just push it at them as much as we possibly could.”

UNC led 34-22 at halftime, never let Virginia closer than nine then ran off 10 straight points to take a 25-point lead and send the Cavaliers to their first three-game skid in a single season in six years.

Marial Shayok scored 13 points to lead Virginia, who finished with the second-lowest point total by an opponent in UNC’s Smith Center — just a basket better than Clemson’s 39 points here in 1995. It was also the fewest points scored by Virginia in the long series since scoring 38 in January 1947.

“We didn’t play well defensively,” said London Perrantes, who scored 12 points. “Our offense kind of messed with our heads and didn’t allow us to go out there and play defense. Our offense definitely took our defense out of the game. “

UNC: This was one of several tough games for UNC coming down the regular-season stretch. Winning this rematch of last year’s ACC Tournament championship game by a lopsided margin has to be a boost to an already confident team.

Jackson, a 6-foot-8 junior, had 18 points on 6-for-8 shooting in the opening half and made four 3-pointers to give UNC a strong start. He had just one basket after halftime, though UNC led big by then as Meeks and Isaiah Hicks (10 points eight rebounds) got going inside.

Virginia went roughly 10 minutes without a basket as UNC pulled away in the second half.

“We tried to spread the floor and go with four guards and had a hard time finishing at the rim,” Cavaliers coach Tony Bennett said. “Points are hard to manufacture for us if we’re not hitting those outside shots.”

The previous low for a UNC opponent under Williams was 42 points, set by North Carolina Central during the 2009-10 season and matched by Northern Iowa earlier this year.

UNC: The Tar Heels have another big home game, hosting No. 8 Louisville on Wednesday night.

Staff report A.L. Brown’s Isaiah Johnson was voted the Most Outstanding Wrestler of the 4A state championship meet in Greensboro.... read more