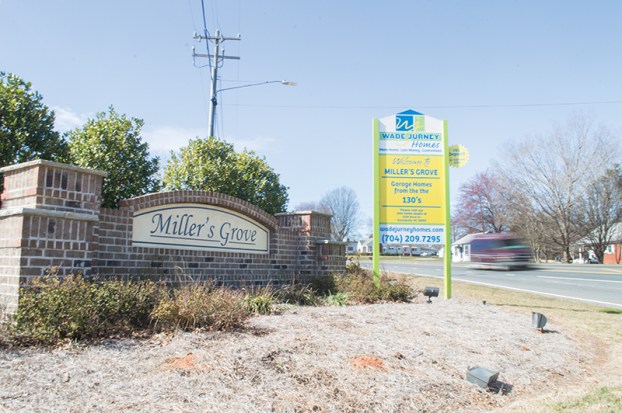 Josh Bergeron / Salisbury Post - A car zips by the Miller's Grove neighborhood, located off of NC 152 in China Grove. The neighborhood's development started slowly but has picked up recently. Josh Bergeron / Salisbury Post – After experiencing some difficulty at the start, the Miller’s Grove neighborhood has seen a number of new houses developed in recent years. The neighborhood is located off of N.C. 152 in China Grove.

CHINA GROVE — With the financial recession behind it, homes are popping up rapidly in the Miller’s Grove subdivision.

Hindered by the poor housing market associated with the Great Recession, Miller’s Grove got off to a slow start. Now, new homes are popping up rapidly in the subdivision. Scott Sokoloski, division president for Wade Jurney Homes, counts 25 to 30 homes that his company has built and sold in the previous nine months.

“It’s a good location right off of I-85 and, as growth moves north, China Grove is the next natural progression,” Sokoloski said.

He said home prices in Concord and Kannapolis are too expensive compared to what’s being built in Miller’s Grove, located just off of N.C. 152. He said prices start just north of $140,000 for three and four bedroom houses. They’re considered “entry-level” homes.

Gary Knox, a developer for Miller’s Grove, said Wade Jurney Homes has been more successful building houses than Shea Homes, the previous builder. However, the recession played a significant role in the lack of success, said Knox and China Grove Mayor Lee Withers.

Because of its recent, rapid pace of construction, Wade Jurney Homes filled up land approved for development by the Town of China Grove. Currently, developers are seeking approval for phase 1b of the project from China Grove. A final subdivision plat for phase 1b was never approved, and the preliminary plat expired.

Phase 1a included 41 lots, and 1b included a couple dozen more.

Withers said “it’s no secret” that the Miller’s Grove development saw some ups and downs, but he’s happy new houses and families are coming to China Grove. He said China Grove is an ideal spot for families looking to buy their first or second home.

“All in all, we are happy to have rooftops and developments coming in,” he said. “It shows that the county is doing some stuff right … It shows that the school system is on the right track.”

If China Grove gives final approve to subdivision plats for phase 1b, Sokolowsi said his company plans to continue development in the Miller’s Grove subdivision. He said Wade Jurney Homes has other projects it’s working on in Rowan County, too.

By Tanya Turner Livingstone News Service SALISBURY — This year, the celebration of Livingstone’s Founder’s Day was marked by the... read more