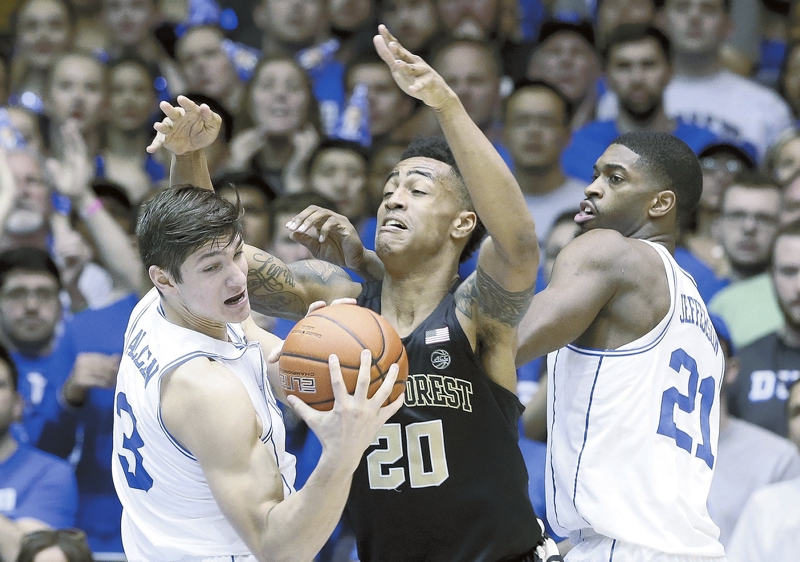 DURHAM (AP) — No. 12 Duke’s once-disjointed roster is coming together and figuring out how to win games — especially the close ones.

The Blue Devils beat Wake Forest 99-94 on Saturday for their seventh straight victory.

“We’re trying to teach them how hard it is to win,” coach Mike Krzyzewski said. “It’s easy to lose. It’s hard to win, because it’s not just about, ‘I want to, I’m prepared, I have a good attitude.’ You have to keep an edge.”

Luke Kennard scored 23 points, freshman Jayson Tatum added 19 and Jefferson had 16 for the Blue Devils (22-5, 10-4 Atlantic Coast Conference), who shot 59 percent, hit 13 3-pointers and traded baskets with Wake Forest all day before finding a way to get the two defensive stops they needed.

None of the seven wins were decided by more than 10 points and the Blue Devils’ average margin of victory in that span is 6.4 points.

Duke’s winning streak started while the roster was still in flux, in late January when roles were still being defined and Krzyzewski was out after having back surgery. Now everybody is back and as healthy as Coach K can hope for at this time of the season.

“You don’t grow when everything is good,” fifth-year forward Amile Jefferson said. “That’s probably what we thought at the beginning (of the season), that everything was going to be good. You grow through adversity, and that’s what we’re doing right now. We’re growing, we’ve been through some stuff and now we’re getting better, everyone’s coming into a role and … everyone’s playing tough.”

Bryant Crawford finished with 21 points, and his layup with about 1:20 to play pulled Wake Forest within 93-92, but he missed two other critical drives in the final minute that would have either tied it or given the Demon Deacons the lead.

Grayson Allen missed the front end of a 1-and-1 with 1:02 remaining for Duke. Crawford’s first layup rimmed out with about 35 seconds left. Tatum hit two free throws with 31.1 seconds left to push the lead to 95-92, and Crawford missed with his left hand with about 15 seconds to play.

Frank Jackson finished with 12 points, Allen had 11 and Matt Jones scored 10 for the Blue Devils.

Wake Forest: Winning at Cameron Indoor Stadium would have been a significant boost for the Demon Deacons’ hopes for their first NCAA Tournament berth since 2010. They haven’t won here since Tim Duncan was a senior in 1997, and fell to 1-25 against ranked teams under Manning.

Duke: This was another gut check for the Blue Devils, who have reached the 10-win mark in ACC play for the 10th straight year while keeping pace in the conference race. Duke began the day in a three-way tie with Louisville and Florida State, one game behind first-place North Carolina.

Collins became the first Wake Forest player to score 30 points at Cameron since Rodney Rogers had 35 in 1993. This was his 10th straight 30-point game, making him the first Demon Deacon to do that since Skip Brown in 1974-75. “John is having a terrific year from a production point of view,” Manning said. “We’re going to get John the ball.”

Duke had a guest on its bench during the game — the father of associate head coach Jeff Capel. The elder Capel is a former coach at Old Dominion and an assistant in the NBA who his son recently revealed has been diagnosed with amyotrophic lateral sclerosis. Krzyzewski said the Blue Devils presented Capel’s father with the game ball. “For me, I didn’t realize how good it would feel to see father and son on the bench,” Krzyzewski said.